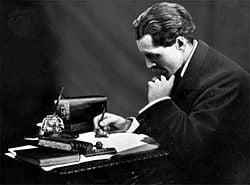 George Gissing at his writing desk.

George Gissing (November 22, 1857 – December 28, 1903) was an English novelist who wrote twenty-three novels between 1880 and 1903. From his early naturalistic works, he developed into one of the most accomplished realists of the late Victorian era.

Naturalism was a late nineteenth century movement that evolved from Realism. Realism focused on the description of the details of everyday existence as an expression of the social milieu of the characters. In naturalist literature the subjects changed to primarily people of lower birth. Within the genre, writers such as Gissing concentrated on society's seamier side and the travails of the lower classes. This became the focal point of their writing. In the nineteenth century, Naturalism was heavily influenced by Marxism and evolutionary theory, such as Darwinism. As a means of criticizing late nineteenth century social organization, Gissing and his contemporaries attempted to apply the scientific rigor and insights of those two theories to artistic representation of society.

Born on November 22, 1857, in Wakefield, Yorkshire, to lower-middle class parents, Gissing' father was a chemist who died young leaving five children. Gissing went on to win a scholarship to Owens College, the present day University of Manchester. A brilliant student, he excelled at university, winning many coveted prizes, including the Shakespeare prize in 1875. When it looked as if he would go on to gain even more distinguished honors as a student and as an academic, he fell in love with a prostitute, Marianne Helen Harrison. As he lacked the means to support her himself, Gissing began to steal from his fellow students. At length, he was caught, convicted of theft, and forced to leave the university; he was sentenced to one month's hard labor in prison. In October 1876, thanks largely to a few local sympathizers, he was shipped off to the United States, where, when close to starvation, he managed to earn a precarious living by writing short stories for the Chicago Tribune. Gissing is the brother of another noted late-Victorian novelist, Algernon Gissing.

On returning to England in the autumn of 1877, Gissing married Marianne, and settled down in London to write novels. In 1880, when his first novel, Workers in the Dawn, proved to be an abject failure, he became a private tutor to keep poverty from the door. In 1883, he separated from his wife, now an alcoholic, but gave her a weekly income on what little money he had until her death in 1888.

In 1884 his second novel, The Unclassed, which saw a marked improvement in style and characterization, met with moderate critical acclaim. After this Gissing published novels almost on a yearly basis, but his work brought him so little money that for several more years he had to continue working as a tutor. Although notoriously exploited by his publishers, he was able to visit Italy in 1889 from the sale of the copyright of The Nether World, his most pessimistic book. Between 1891 and 1897 (his so-called middle period), Gissing produced his best works, which include New Grub Street, Born in Exile, The Odd Women, In the Year of Jubilee, and The Whirlpool. Among the early practitioners of the school of literature known as naturalism, his novels variously deal with the growing commercialism of the literary market, religious charlatanism, the situation of emancipated women in a male-dominated society, the poverty of the working classes, and marriage in a decadent world. During this period, having belatedly become aware of the financial rewards of writing short stories for the press, he produced almost seventy stories. As a result he was able to give up teaching.

In February 1891, he had married another working-class woman named Edith Underwood and moved to Exeter. Despite the marital difficulties (Edith was prone to fits of violence and mental instability) they had two children together. After several more moves, Gissing separated from Edith in 1897, leaving his children with his sisters in Wakefield; in 1902, Edith was certified insane.

The middle years of the decade saw Gissing's reputation reach new heights: By some critics he is counted alongside George Meredith and Thomas Hardy as one of the three best novelists of his day. He also enjoyed new friendships with fellow writers such as Henry James and H.G. Wells, and came into contact with many other up and coming writers such as Joseph Conrad and Stephen Crane. He made a second trip to Italy in 1897-1898, and also visited Greece. Towards the end of the nineties his health declined—he was eventually diagnosed with emphysema—so that he had to stay at a sanatorium from time to time. In 1898, he met Gabrielle Fleury, a Frenchwoman who had approached him in order to translate one of his novels, and fell in love with her. The following year they took part in a private marriage ceremony in Rouen, even though Gissing had been unable to obtain a divorce from Edith, and from then on they lived in France as a couple.

In 1903 Gissing published The Private Papers of Henry Ryecroft, which brought him much acclaim. This is his most autobiographical work. It is the memoir of the last happy years of a writer who had struggled, much like Gissing, but thanks to a late legacy had been able to give up writing to retire to the countryside.

Gissing died on December 28, 1903, aged forty-six from the effects of emphysema, after having caught a chill on an ill-advised winter walk. At his death he left one unfinished novel, Veranilda, which is set in Rome during the sixth century. Gissing is buried in the English cemetery at Saint-Jean-de-Luz.

New Grub Street is a novel published in 1891, which is set in the literary and journalistic circles of late-1800s London.

The story is about the literary world of late-Victorian London that Gissing inhabited, and its title, New Grub Street, alludes to the London street, Grub Street, which in the 18th century became synonymous with the "hack writing" that pervades Gissing's novel; Grub Street itself was no longer extant when Gissing was writing. The novel contrasts Edwin Reardon, a congenitally un-commercial but talented writer, against Jasper Milvain, a selfish and unscrupulous hack who rejects artistic endeavor for material gain. Milvain's trite, manipulative work ascends while Reardon's work—and his life—spiral downward.

George Gissing was a prolific writer publishing two dozen novels during his lifetime as well as an important critical study of Charles Dickens, a somewhat unsentimental look at the sentimental novelist. Gissing's works were a significant contribution to the development of Naturalism.

George Gissing is a "character" in Peter Ackroyd's Dan Leno and the Limehouse Golem.

Wikisource has original works written by or about:
George Gissing

Retrieved from https://www.newworldencyclopedia.org/p/index.php?title=George_Gissing&oldid=1005146
Categories:
Hidden category:
This page was last edited on 14 June 2017, at 21:10.
Content is available under Creative Commons Attribution/Share-Alike License; additional terms may apply. See Terms of Use for details.