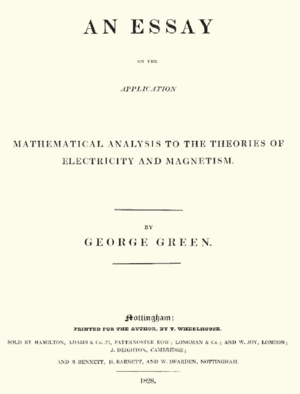 The title page to George Green's original essay on what is now known as Green's theorem. It was published privately at the author's expense, because he thought it would be presumptuous for a person like himself, with no formal education in mathematics, to submit the paper to an established journal.

George Green (July 14, 1793 – May 31, 1841) was a baker and miller who, with little formal education, authored an important treatise on mathematical physics. He introduced the idea of electrical potential and developed novel mathematical approaches to the solution of problems in electricity and magnetism. Although his work was not well-known in the mathematical community during his lifetime, it was rediscovered in 1846 by William Thomson (later Lord Kelvin), who popularized it. Albert Einstein declared that Green had been 20 years ahead of his time.

Green's life story is remarkable in that he was almost entirely self-taught. He was the son of George Green, a baker, and Sarah Butler Green, and lived for most of his life in the English town of Sneinton, Nottinghamshire, now part of the city of Nottingham. His father built and owned a brick windmill used to grind grain, and Green would inherit the business upon his father's death. At age 8, Green was sent to the school of Robert Goodacre, but stayed there for only four terms. This short stint constitutes Green's only formal education in his early years. Green began his apprenticeship at his father's bakery when he was 14. After his apprenticeship, Green continued to work at his father's bakery and mill.

In 1823, Green enrolled in the Nottingham Subscription Library. There he found the published works he needed to further his education in mathematics. These included the advanced mathematical works of Pierre-Simon Laplace and Joseph Fourier. As a member of the library, he could also interact with a class of people that were educated and well-to-do. Around this time Green met Jane Smith, and although they were never formally married, the couple had seven children. Their first child was born in 1824.

It is unclear to historians exactly where Green obtained information on current developments in mathematics. Only one person educated in mathematics, John Toplis, is known to have lived in Nottingham at the time. Green himself sheds a little light on this matter in a general way when he says, in the introduction to his first treatise, that it was written "by a young man, who has been obliged to obtain the little knowledge he possesses, at such intervals and by such means, as other indispensable avocations which offer but few opportunities for mental improvement, afforded" (Green and Ferrers 1970, 8). He was certainly familiar with the experimental properties of static electricity. When Green published his Essay in 1828, it was sold on a subscription basis to 51 people, most of whom were friends and probably could not understand it.

Green attempted to improve on the work of his predecessors. Through his advanced mathematical analysis, including the formulation of what today are called Green's function and Green's theorem, he was able to show the manner in which electricity distributes itself on the surface of conductors of various sizes and shapes, either standing alone or connected to one another by conducting wires.

Green continued to work in his father's mill, and inherited it upon his father's death in 1829. In April of 1828, the wealthy landowner, mathematician and Cambridge graduate Sir Edward Bromhead bought a copy of Green's treatise and wrote Green, encouraging him to do further work in mathematics. Green wrote an apologetic note back a year and a half later, claiming that he had been discouraged from making an earlier response. It was about two years later, in 1832, that Green submitted to Bromhead for publication a memoir on the equilibrium of fluids. It took another 10 months before the paper appeared in print. Bromhead facilitated the presentation of three of Green's papers to the Cambridge Philosophical Society and the Royal Society of Edinburgh.

In 1833, Bromhead helped Green's admission to the Cambridge University. Green was at the relatively advanced age of 40 at the time. This presented some difficulties in his academic career, but after his graduation as fourth wrangler (he placed fourth in an important mathematical examination) in 1837, he stayed on the faculty at Gonville and Caius College, Cambridge. He wrote on optics, acoustics, and hydrodynamics, and while his later works have not had the same impact as his Essay, they contain some substantial results. Green's work on the motion of waves in a canal anticipates some mathematical formulations of quantum mechanics, while his research on light waves and the properties of the ether produced what is now known as the Cauchy-Green tensor.

In 1839, Green was elected a Fellow of the college; however, he only remained there for two terms: In 1840 he returned to Nottingham. where he died the next year, in the home of the mother of his children, on May 31, 1841. The cause of his death was influenza, although it is believed that a life working in a grist mill may have irritated his respiratory tract and given rise to the condition that forced his departure from Cambridge a year earlier.

In his first paper, An essay on the application of mathematical analysis to the theories of electricity and magnetism, Green describes "the function V representing the sum of all the electric particles in the system divided by their respective distances from p. As this function...gives in so simple a form the values of the forces by which a particle p of electricity, any how situated, is impelled...we have ventured to call it the potential function belonging to the system" (Green and Ferrers 1970, 22). The potential function, so named by Green, is a cornerstone of mathematical physics.

Green developed a way of expressing a summation of forces along a closed loop in a plane, in terms of a summation of quantities derived from these forces over the area enclosed by the loop. This enabled mathematicians and physicists to solve problems expressed in the first form, by transforming them into an expression of the second form.

Green's function is used as a way to solve differential equations that express natural laws. Green used this method to simplify the explanation of electrical and magnetic phenomena. In the twentieth century, it was applied to quantum mechanics with great success. One of the pioneers of this application was Freeman Dyson, who describes the historical impact of Green's Function: "George Green's discovery, the Green's Function, is a mathematical tool rather than a physical concept. It did not give the world a new theory of electricity and magnetism, or a new picture of physical reality. It gave the world a new bag of mathematical tricks, useful for exploring the consequence of theories and for predicting the existence of new phenomena that experimenters could search for" (Cannell 2001, 233). Green's functions are used in a wide range of investigations in mathematical physics.

The George Green Library at the University of Nottingham is named after him, and houses the majority of the University's Science and Engineering Collection. In 1986, Green's mill was restored to working order. It now serves both as a working example of a nineteenth-century mill and as a museum and science center dedicated to George Green.

On a visit to Nottingham in 1930, Albert Einstein commented that Green had been 20 years ahead of his time. The theoretical physicist, Julian Schwinger, who used Green's functions in his groundbreaking works, published a tribute titled "The Greening of Quantum Field Theory: George and I." After describing something of Green's influence on nineteenth-century physics, Schwinger explains how, in his own career during the mid-twentieth century, he often came upon Green's name in connection with the important theorem he developed. Schwinger concluded: "What, finally, shall we say of George Green? Why, that he is, in a manner of speaking, alive, well, and living among us" (Milton 2000, 304).

Retrieved from https://www.newworldencyclopedia.org/p/index.php?title=George_Green&oldid=1005147
Categories:
Hidden category:
This page was last edited on 14 June 2017, at 21:11.
Content is available under Creative Commons Attribution/Share-Alike License; additional terms may apply. See Terms of Use for details.