James Joseph "Gene" Tunney (May 25, 1897 – November 7, 1978) was the heavyweight boxing champion from 1926-28 who defeated Jack Dempsey twice, first in 1926 and then in 1927. Tunney's successful title defense against Dempsey is one of the most famous bouts in boxing history and is known as The Long Count Fight. Tunney retired as a heavyweight after his victory over Tom Heeney in 1928. He is known for his unique style, which was not sheer brutality like that employed by fellow boxers, but rather a calculated wearing down of the opponent to bring about a sure defeat. Tunney was not like other boxers in that he was very smart, he was even known to quote Shakespeare regularly and forbade cursing in his presence. He was not rough and brutish like the boxers were thought to be at the time. Instead he was handsome and gentlemanly. In his years in the ring he suffered only one loss decided by unanimous decision (he would go on to beat the man who defeated him in four subsequent rematches).[1]

Regarded by many as a brutal sport, boxing has often provided the way out of poverty for many of its most famous exponents. Known for his intellect, Tunney was a Marine private in World War I and a Navy Captain in World War II. He became a successful businessman after his retirement from boxing, suggesting that had other career paths been open to him he may have made a more significant contribution to society than one that in the main involved trying to physically wear down, and even knock down, his opponents. Like others from a similar background, however, one embarked on boxing as a career, he discipled and trained himself so that he could excel at what he did, setting an example for others to emulate. In a more ideal world, everyone would have an opportunity to complete their education and to find meaningful and worthwhile employment. Young men would not need to box their way out of poverty and up the ladder to economic security.

Tunney was the second of seven children born from his Irish immigrants’ parents in Greenwich Village. His family was working class and Tunney held a number of odd jobs in his youth to help with financial burdens. When he reached the age of ten, his father presented him with his first pair of boxing gloves and he took part in the sport when he had free time. Although he would develop what was described as a scientific boxing style, he initially learned to fight in the streets. In his teens, he started to frequent the Greenwich Village Athletic Club at nights. His day time job was typing for a steamship company.[2] He was first paid to box at 18. He won $18 for the defeat of his more seasoned opponent, knocking him out. In World War I Tunney served in the U.S. Marines. He joined in July 1918 and was stationed in France. He was awarded the Good Conduct Medal for won the Expeditionary Force light heavyweight championship while stationed in France. He started his professional career following his honorable discharge.[1]

In 1922, he defeated Battling Levinsky and won the American Light Heavy Weight title. The only defeat of his career was against challenger Harry Greb later that year. The fight went to fifteen rounds. Greb broke his nose but "could not knock him out".[2] Greb won but a year later beat him in the rematch, another fifteen round, hart-hitting marathon, winning a majority decision. He then set his sights on the heavyweight championship, held by the most famous boxer of the time, Dempsey, who he had long wanted to challenge. The first of two matches with Dempsey took place in 1926. Rematches with Greb in 1923, 1924 and 1925 were all won by Tunney

Due to his agent's "promotional genius," his 1926 fight against Dempsey in Philadelphia attracted a crowd of 120,757 people and a box office taking of two million dollars. This victory gave him the heavyweight title. The re-match, in Chicago in 1927, took $2.6 million and set a record. Tunney was knocked down during round seven. The "long count" occurred because under Illinois rules, Dempsey had to stand in a neutral corner during the count and instead went and stood in Tunney's corner. By the time the referee had "got Dempsey to the neutral corner, Tunney had been down for at least four seconds."[2] However, he got to his feet before the count of ten and went on to win the fight. Both matches were won by decision of the judges. In addition to beating Dempsey, Tunney defeated Tommy Loughran, Tommy Gibbons, Georges Carpentier, and many other boxers. He was, however, banned from fighting in the State of New York because he refused to defend his title against an African-American challenger, Harry Wills.

Tunney also had a brief acting career, starring in the movie The Fighting Marine in 1926. Unfortunately, no prints of this film are known to exist. Directed by Spencer Gordon Bennett, this black and white silent movie was distributed by Pathé Exchange.[3] Although this role was not followed by others, Tunney was an early example of someone whose celebrity status in sport or in a field outside of the theater led to exposure on the big screen. It has subsequently become more common for sporting heroes and stars to also star in front of the camera. That year, he made the front cover of Time Magazine.

In 1928, after defeating Australian Tom Heaney with an eleventh round knock out, he retired from his boxing career. His finished his career with a total of 88 fights, 82 wins, 48 knock-outs, one defeat and three draws and two no contests. He was known to study his opponents and defeat them by wearing them down, rather than inflicting simple, hard, brutal blows, as was the norm. Unlike many other boxer, Tunney was also highly intelligent and even went on to speak on Shakespeare at Yale University. He knew both Ernest Hemingway and George Bernard Shaw who took an interest in his career. Such men, interested in sport, were attracted by his "relative intellectualism, reticence in public, and scientific boxing style" which at the same time distanced him from fight fans and the press.[2] When interviewed by the press, he "exuded confidence." Seen reading a book during a training session, this was too much for the press, which ridiculed him.[2] Later, other famous boxers, not least of all Muhammad Ali became famous for their fighting-talk and self-promotion before entering the ring. He studied Dempsey's boxing style in detail, watching numerous films of his fights. He also interviewed former opponents of Dempsey to learn as much as he could from their experience. He was elected as Ring Magazine's first-ever Fighter of the Year in 1928 and later elected to the World Boxing Hall of Fame in 1980, the International Boxing Hall of Fame in 1990, and the Marine Corps Sports Hall of Fame in 2001. 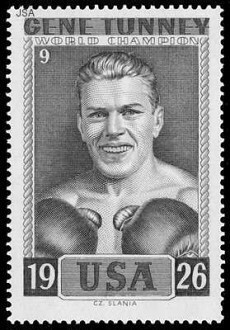 Tunney was of Irish descent.

After retiring from boxing, Tunney married heiress to a steel manufacturing fortune, Polly Lauder. He also served in the United States Navy during World War II from 1940 to 1945. This time a commissioned officer (he was a private in the First World War) he was appointed "head of the Naval Physical Fitness Program." "In this capacity, he traveled throughout the Pacific Theater during the war" and when he "resigned from the Navy" in 1945 he had the rank of Captain.[4] Following the war, he spent the rest of his life as a wealthy businessman. He was fortunate to retire from boxing with good health and the ability to pursue a career outside the ring.

After his death in 1978, at 81 years old, Tunney was interred in the Long Ridge Union Cemetery in Stamford, Connecticut.

Gene Tunney was the father of John V. Tunney, who was a Senator and Representative from California from 1965 until 1977.

Tunney was a thinking fighter who preferred to make a boxing match into a game of chess; a style which was not popular during the times when such sluggers like Jack Dempsey, Harry Greb and Mickey Walker were commanding boxing's center stage. Tunney's style was influenced by other noted boxing thinkers such as James J Corbett and Benny Leonard.

Always moving and boxing behind a good solid left jab, Tunney would start reading and dissecting his opponent from the first bell, preferring to stay on the outside, nullifying any attack his opponent had. Tunney would use quick counters to keep his opponents off balance. Not known as a big puncher, Tunney could hit with venom when needed. Especially, once he had figured his opponent was exhausted or hurt. With his meticulous preparation and book-reading reputation, Tunney's style was often described as "scientific."