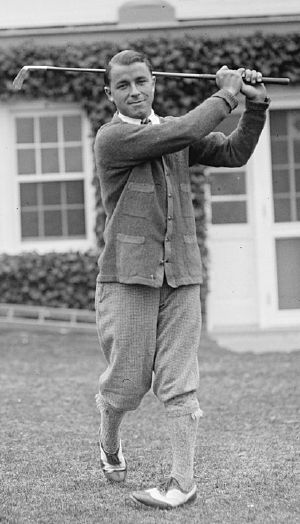 Gene Sarazen (born Eugenio Saraceni) (February 27, 1902 – May 13, 1999) is one of only five golfers (along with Ben Hogan, Jack Nicklaus, Gary Player, and Tiger Woods) to win all the major championships in his career, the Career Grand Slam: U.S. Open in 1922, 1932, PGA Championship in 1922, 1923, 1933, British Open in 1932, and The Masters in 1935. Sarazen is a quintessential American success story, who rose from the ranks of the caddies to become one of the greatest golfers in the world, and then who rose again from a long, mid-career slump to once again achieve greatness, winning his second U.S. Open and third PGA championships ten years after his previous victory. Known as "The Squire," Sarazen was considered one of the gentlemen of the game,and one of its greatest competitors. After early success, he came back from a mid-career slump to win all four majors in his 30s.

Gene Sarazen was born on February 27, 1902 into a two-family house in the workingman's district of Harrison, New York. His father, Federico Saraceni was a carpenter who moved to America with the hope of making a fortune. His dad along with his mother Adela, sister Margaret and Gene lived in the crowded confines in the upstairs level of a house, living in poverty for much of Gene's childhood.

To help with his family's financial situation, Gene started to earn income by selling newspapers, running errands for neighbors, picking fruit for three cents a quart, and any other labor available for a child of his age. It was at the age of eight when Gene first heard of the sport of golf because of news his mother brought home from the grocery store. She told him of a neighbor's son who was hired as the caddy master at Larchmont Country Club, and that he needed "boys to carry the sticks for the rich people."[1]

Gene couldn't wait to get started on the job, but it was difficult at first for the youngster. Not only were the clubs heavy, but he didn't know the difference between them either. Despite the troubles, Gene came home his first day with 45 cents, and was proud to show everyone of his accomplishment.

He continued to work as a caddy at the club for three years until the age of 11. Now a bigger, and more knowledgeable caddy, Sarazen moved to the bigger Apawamis Club where he had the chance to make more money. That same year, Francis Ouimet, a young Boston caddy upset British phenomenon Harry Vardon and pro golfer Ted Ray for the U.S Open title, an accomplishment that helped raise the status of caddies all over the country. Due to the upset by Ouimet, the Apawamis Club allowed the caddies to hold a one-day tournament. Sarazen played hooky from school to participate. Gene ended his round with a 105, a score good for dead last in the tournament.

At the age of 15, Gene quit school and became a carpenter's assistant for his father when his dad was wiped out in a business venture earlier that year. Later on that year, the family moved to Bridgeport, Connecticut, where Mr. Saraceni got a job in a war plant facility. Despite the change in employment, Gene continued to work at a plant where his job consisted of drilling holes in wooden racks for shells to be shipped out to the Russians. With the added work hours, and responsibility, Gene got sick with pneumonia, an illness that made him quit both his job and his hobby of golf for a short time. His doctor advised him that the dusty conditions would be very detrimental to his health, so he needed to find an outdoor job, and decided on an assistant professional position at a nearby course. While his doctor gave him one opinion, his father told him that he should not pick up the game of golf: "It's a game for rich men, every man should have a trade, you should stick to carpentering." Gene remained loyal to his passion for the game, and told his father, "I'm going to learn how to make golf clubs, I'm going to learn how to teach, I'm going to play in tournaments."[2]

With his mind made up Sarazen continued with the sport of Golf, and was trained by Italian pro golfer Al Ciuci. Under Ciuci's eye, Sarazen started shooting lower than 35 strokes in nine holes consistently, and started to make a name for himself in the sport he loved.

At the age of 18, Sarazen qualified for the National Open and ended the event by finishing tied for thirteenth place. The next year in 1921, he finished seventeenth at the National, but got headlines when he upset Jock Huthcinson in a early round at the PGA, and won the New Orleans Open.

The next year Gene had a premonition he was going to win the National Open, starting with an opening round 72, and a second round 73. In the third round, Sarazen had eight fives on his scorecard which led to a third round 75, putting him four back of the leaders Bobby Jones and Bill Mehlhorn. In the final round he started hot sinking a 25-foot birdie putt on the third hole, and sank another from 15-feet on the fourth. With his momentum peaking, and his confidence at a pinnacle, he played incredibly aggressive golf, and it paid off. Sarazen finished with a final round 68, and a combined score of 288. After waiting for the third round leaders, who teed off well after he did and finished hours later, Sarazen had won his first national championship.

After the win at the National Open he used the win as momentum, winning the 1922 PGA Championship when he beat Walter Hagen 3 and 2 in the final match. (At that time, the PGA championship was match play, with winners of each match advancing on until there were only two golfers left in the field, who would play for the championship.)

While Sarazen already had two big wins under his belt, his early success led him to become overconfident. He put too much pressure on himself and started to over think the game in which he used to play with such aggressive, incredible shots. He changed his grip and swing, and soon became far too confused on the golf course to be successful. He won his second PGA Championship in Pelham, New York but was a complete bust in his first attempt at the British Open. All the fans in Britain had heard of Sarazen, and favored him to win but when he arrived at Troon, Scotland he didn't know what was coming. He opened with a 75, but in his second round used 14 strokes on the first two holes, a setback from which he would never recover, finishing with a 85. He failed to make the cut.

For the next ten years, Sarazen went into a tremendous slump. He changed his grip from the Vardon Grip to his own interlocking grip almost every month, he altered his swing, lost his putting touch, and his confidence. While he still found ways to win a couple small tournaments here and there, Sarazen was still frustrated with his consistency. As soon as he thought he had found his stroke, he would shoot a round in the 80s and lose it again.

The slump ended at the 1932 Open Championship when Sarazen entered the course at Sandwich with a the willingness to try anything to get back to the top. That desire was evident when he hired the 60-year old caddy he fired five years earlier, Skip Daniels to try and spark a comeback. With the experienced caddy at his side, Sarazen opened the Open with a score of 70, giving him a one stroke lead on the field. On the second day, he tied the course record with a 69, giving him a three stroke lead at the halfway point. Entering the weekend with confidence, he continued hitting the ball incredibly well by shooting a third round 70, increasing the lead to five strokes. With the big lead and every golf fan watching his every move, he ended the tournament by shooting a 74, and ending with a total of 283. Although he struggled, it was still good for the tournament record and gave Sarazen the boost he needed to get back to the level he was at before his slump.

Sarazen continued his success when he took home his third PGA Championship in 1933, and finished one stroke from the National Open title in 1934 to Olin Dutra.

Sarazen invented the modern sand wedge and debuted the club at the British Open at Prince's Golf Club in 1932 (which he won). He called it the sand iron and his original club is still on display at Prince's.

Sarazen hit "The shot heard 'round the world" in the 1935 Masters. It was a final round 235-yard 4-wood on the par-5 fifteenth hole that went in, giving him a very rare double eagle 2 on the hole. It led to his later winning the tournament in a playoff over Craig Wood. At the time of his second shot a check for $1,500, the winning prize, had already been written to Craig Wood.

Staying in the Sport

While some were known for leaving the sport after they were past their prime, Sarazen could not walk away. On April 6, 1963 most of the spectators at the third round Masters had their eyes focused on a unusual pairing. The first player was Arnold Palmer, the defending champion of the event, and the number one player in the world at the time. The other was 61-year old Gene Sarazen, the link to the game's old school. The pairing was was brought about by Sarazen's incredible play, having tied Palmer after two rounds with a score of 147.

Although he continued to play in tournaments, the amount of appearances were greatly cut down because of his business ventures. He would still show up to play in some senior and PGA events, but most of his time was spent off the course. He popularized the sport with his role as a commentator on the Wonderful World of Golf television show. For many years after his retirement, Sarazen was a familiar figure as an honorary starter at the Masters. From 1981-1999, he joined Byron Nelson and Sam Snead in hitting a ceremonial tee shot before each Masters tournament.

In 1992, he was voted the Bob Jones Award, the highest honor given by the United States Golf Association in recognition of distinguished sportsmanship in golf.

Gene Sarazen died on May 13, 1999, but his spirit will ever be instilled in the game of golf. The bold-shooting graduate from the caddy ranks was a golfer that bridged the game from the days between Vardon and Nicklaus. While some golfers changed their attire to new modern outfits, Sarazen was known for his knickers and turtle-neck sweaters, a style that would later be adopted by modern golfer Payne Stewart. His 1932 win at the Open to get over his long slump, and his "shot heard round the world" at the 1935 Masters are just two of his many memorable events for which he will be remembered.

Major championships are shown in bold.

Retrieved from https://www.newworldencyclopedia.org/p/index.php?title=Gene_Sarazen&oldid=1083510
Categories:
Hidden category:
This page was last edited on 23 October 2022, at 21:10.
Content is available under Creative Commons Attribution/Share-Alike License; additional terms may apply. See Terms of Use for details.