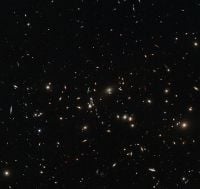 Galaxy groups and clusters are the largest gravitationally bound objects that have been detected in the universe. They form the densest part of the large-scale structure of the universe. Groups and clusters may contain anywhere from three to thousands of galaxies. The smaller aggregates, typically containing less than 50 galaxies each, are referred to as galaxy groups, and the larger aggregates are known as galaxy clusters. There is, however, no sharp dividing line between the two. The clusters themselves are often associated to form larger aggregates called superclusters.

Each galaxy is composed of stars (or star-like objects), dust particles, gas, and plasma. Each cluster or group of galaxies is thought to consist of two additional types of components[1]:

In models of the formation of groups and clusters of galaxies, astronomers believe that the smallest structures are formed first, as clumps of dark matter and associated galaxies are drawn together by gravitational attraction. Over time, the smaller groups merge to form clusters of increasing size.[1] Clusters appear to have begun forming 10 billion years ago and it is thought that they continue to form today.[2]

Groups of galaxies usually contain fewer than 50 galaxies in a diameter of 1 to 2 megaparsecs (Mpc) (1 Mpc is approximately 3,262,000 light-years, or 2×1019 miles). Their mass is approximately 1013 solar masses. The spread of velocities for the individual galaxies is about 150 km/s. However, this definition should be used only as a guide, as larger and more massive galaxy systems are sometimes classified as galaxy groups.

X-ray studies have revealed the presence of large amounts of intergalactic gas known as the intracluster medium. This gas is very hot, between 107K and 108K, and hence emits X-rays in the form of bremsstrahlung and atomic line emission. The total mass of the gas is greater than that of the galaxies by roughly a factor of two. However, it is still not enough mass to keep the galaxies in the cluster. Since this gas is in approximate hydrostatic equilibrium with the overall cluster gravitational field, the total mass distribution can be determined. It turns out the total mass deduced from this measurement is approximately six times larger than the mass of the galaxies or the hot gas. The missing component is known as dark matter and its nature is unknown. In a typical cluster, perhaps only 5 percent of the total mass is in the form of galaxies, maybe 10 percent in the form of hot X-ray emitting gas and the remainder is dark matter. Brownstein and Moffat[3] use a theory of modified gravity to explain X-ray cluster masses without dark matter.

Clusters typically have the following properties.

Notable galaxy clusters in the relatively nearby universe include the Virgo cluster, Hercules Cluster, and the Coma Cluster. A very large aggregation of galaxies known as the Great Attractor, dominated by the Norma cluster, is massive enough to affect the local expansion of the universe (Hubble flow). Charles Messier discovered the first galaxy cluster, called the Virgo Cluster, in 1784.[4]

In the last few decades, clusters are also found to be relevant sites of particle acceleration, a feature that has been discovered by the observation of non-thermal, diffuse radio emissions as radio halos and radio relics.

Groups, clusters and some isolated galaxies form even larger structures, the superclusters. At the very largest scales of the visible universe, matter is gathered into filaments and walls surrounding vast voids. This structure resembles a foam.

Clusters of galaxies have been found in surveys by a number of observational techniques and have been studied in detail using many methods:

Clusters of galaxies are the most recent and most massive objects to have arisen in the hierarchical structure formation of the universe and the study of clusters tells one about the way galaxies form and evolve. Clusters have two important properties: their masses are large enough to retain any energetic gas ejected from member galaxies and the thermal energy of the gas within the cluster is observable within the X-Ray bandpass. The observed state of gas within a cluster is determined by a combination of shock heating during accretion, radiative cooling, and thermal feedback triggered by that cooling. The density, temperature, and substructure of the intracluster X-ray gas therefore represents the entire thermal history of cluster formation. To better understand this thermal history one needs to study the entropy of the gas because entropy is the quantity most directly changed by increasing or decreasing the thermal energy of intracluster gas.

Some well-known galaxy clusters and groups