Food chains, along with food webs and food networks, describe the feeding relationships between species in a biotic community. In other words, they show the transfer of material and energy from one species to another within an ecosystem. A food chain describes a single pathway that energy and nutrients follow in an ecosystem, while a food web describes a complex network of interactions.

Food chains and food webs reveal the balance, complexity, and harmony of the universe in the flow of nutrients and energy. In a healthy ecosystem, each level flourishes and provides benefit to the next level. If a major change in the food web occurs, such as the removal a top predator, the equilibrium is disrupted.

As usually diagrammed, organisms are connected by arrows representing the direction of biomass transfer. That is, if one organism is a source of food energy and material for another organism, there is an arrow pointing from the source organism to the recipient organism.

Organisms are grouped into a trophic level—from the Greek for nourishment, trophikos—based on how many links they are removed from the primary producers. Primary producers, or autotrophs, are species capable of producing complex organic substances (essentially "food") from an energy source (such as sunlight) and inorganic materials. These organisms are typically photosynthetic plants or algae, but in rare cases, such as those organisms forming the base of deep-sea vent food webs, the organisms can be chemotrophic.

A heterotroph is an organism that is incapable of making its own food from light or inorganic compounds, and feeds on organisms or the remains of other organisms to get its necessary energy to survive. A heterotroph is known as a consumer in the food chain. Another way to define a heterotroph is an organism that requires organic substrates to get its carbon for growth and development. This is in contrast with autotrophs, or primary producers, which use inorganic carbon dioxide or bicarbonate as its sole carbon source. All animals are heterotrophic, as well as fungi and many bacteria. Primary consumers eat autotrophs, secondary consumers eat primary consumers, and so forth.

A food chain describes a single pathway that energy and nutrients may follow in an ecosystem. There is one organism per trophic level, and trophic levels are therefore easily defined. They usually start with a primary producer and end with a top predator. Here is an example of a food chain:

This "chain" can be described as follows: Killer whales (Orca) feed upon seals, that feed upon squid, that eat small fish, that feed on copepods, that feed on microscopic algae. In this example, algae—autotrophs by virtue of their ability to photosynthesize—are the base of the food chain.

It is always the case that numbers, or at least biomass, decreases from the base of the chain to the top. In other words, the number and mass of phytoplankton cells is much greater than the number and mass of copepods being supported by the phytoplankton. Viewed another way: to support one Orca requires many seals, large numbers of squid, huge numbers of fish, and so on down the chain.

Food chains are overly simplistic as representatives of what typically happens in nature. The food chain shows only one pathway of energy and material transfer. Most consumers feed on multiple species and are, in turn, fed upon by multiple other species. 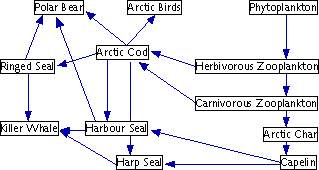 Example of a food web in an Arctic ecosystem

A food web or food network extends the food chain concept from a simple linear pathway to a complex network of interactions. The direct steps as shown in the food chain example above seldom reflect reality. This "web" makes it possible to show much bigger animals (like a whale) eating very small organisms (like plankton). Food sources of most species in an ecosystem are much more diverse, resulting in a complex web of relationships as shown in the figure on the right. In this figure, the grouping of Phytoplankton → Herbivorous zooplankton → Carnivorous zooplankton → Arctic char → Capelin on the far right is a food chain; the whole complex network is a food web/network.

Lindeman (1942) determined energy transfer by quantifying energy transfer between successive energy levels, in which the production at one trophic level depended on production at the preceeding trophic level. Lindeman (1942) and others (Odum 1959, Kozlovsky 1968) identified three ecological efficiencies: consumption, assimilation, and production. The amount of energy in each trophic level can be displayed in a pyramid, where the base holds the lowest trophic level and the largest quantity of energy. Similarly, a biomass pyramid displays the amount of material in each level of the pyramid, where the greatest biomass is contained in the lowest trophic level at the base. The pyramids may vary in shape, depending on the energy in different ecosystems. Grasslands have narrow bases because plants contain less woody structures in relation the relatively large amount of biomass of herbivores. Aquatic ecosystems have reverse biomass pyramids, because the primary producers do not need to create as much biomass in order to photosynthesize, thanks to the bouyancy provided by water.

Retrieved from https://www.newworldencyclopedia.org/p/index.php?title=Food_chain&oldid=794566
Categories:
This page was last edited on 29 August 2008, at 13:58.
Content is available under Creative Commons Attribution/Share-Alike License; additional terms may apply. See Terms of Use for details.