Farouk I of Egypt ‎(February 11, 1920 – March 18, 1965), was the tenth ruler from the Muhammad Ali Dynasty and the penultimate King of Egypt and Sudan, succeeding his father, Fuad I, in 1936. His sister Fawzia was Queen of Iran for eight years. His full title was "His Majesty Farouk I, by the grace of God, King of Egypt and Sudan, Sovereign of Nubia, of Kordofan, and of Darfur." He was overthrown in the Egyptian Revolution of 1952, and was forced to abdicate in favor of his infant son Ahmed Fuad, who succeeded him as King Fuad II. He died in exile in Italy.

His son was king for less than a year; Egypt became a republic in 1953. Although he had famously promised his subjects that he would make every sacrifice in pursuit of their interests and of his duty as ruler, Farouk's enduring reputation is his profligate life-style. While his nation was ranked among the poorest in the world, he ranked as one of the world's richest men and almost seemed to flaunt this in front of his people. Even in exile he continued to act the playboy so that ex-king Farouk, as he was known, was a popular party guest and was often mentioned in the gossip columns of the world's media.

Had he delivered what he promised, and shared power with others within a constitutional monarchy, he might have ensured the survival of his dynasty, in power since 1805. Egyptian democracy since the end of monarchy, has been fragile, with Presidents securing huge majority's, single-party elections and harassment of political dissenters. Had Farouk laid down a solid foundation for good, participatory, open governance, Egypt's subsequent political history would have been different. In this respect, he compares with other monarchs, such as Otto of Greece and Abdul Hamid II of the Ottoman Empire who also failed to shift from autocracy to democracy, bequeathing their polities an ambiguous heritage in terms of their relationship with democratic governance.

The great-great-grandson of Muhammad Ali Pasha, Farouk was of Albanian descent. Before his father's death, he was educated at the Royal Military Academy, Woolwich, England. On his coronation, the 16-year-old King Farouk made a public radio address to the nation, the first time a sovereign of Egypt had ever spoken directly to his people in such a way:

And if it is God's will to lay on my shoulders at such an early age the responsibility of kingship, I on my part appreciate the duties that will be mine, and I am prepared for all sacrifices in the cause of my duty... My noble people, I am proud of you and your loyalty and am confident in the future as I am in God. Let us work together. We shall succeed and be happy. Long live the Fatherland![1]

The 1923 constitution had established a parliamentary system. However, he constantly interfered and appointed a succession of minority government. He excluded the Wafd party, which ran its own militia, the Blueshirts, from power except for a brief period (42-44). Corruption scandals were endemic, resulting in public distrust of government. Although constitutionally Farouk did not have autocratic power, this did not prevent him from acting as if he did. Use of the title "Pharaoh" in some literature is as much an allusion to his leadership style as to any claim of being the successor of Egypt's ancient rulers. In the Quran, Pharaoh is synonymous with tyranny, Pharaohs "arrogantly exalted themselves" (Quran 28:3-4) and claimed to be divine (Quran 28: 38).

Farouk was enamored of the glamorous royal lifestyle. Although he already had thousands of acres of land, dozens of palaces, and hundreds of cars, the youthful king would often travel to Europe for grand shopping sprees, earning the ire of many of his subjects.

During the hardships of World War II, criticism was leveled at Farouk for his lavish lifestyle. His decision to keep all the lights burning at his palace in Alexandria, during a time when the city was blacked-out because of German and Italian bombing, was deemed particularly offensive by some. Due to the continuing British occupation of Egypt, many Egyptians, Farouk included, were positively disposed towards Germany and Italy, and despite the presence of British troops, Egypt remained officially neutral until the final year of the war. Consequently, the royal Italian servants of Farouk were not interned, and there is an unconfirmed story that Farouk told British Ambassador Sir Miles Lampson (who had an Italian wife), "I'll get rid of my Italians, when you get rid of yours." Farouk only declared war on this Axis Powers under heavy British pressure in 1945, long after the fighting in Egypt's Western Desert had ceased. He has been accused of sympathizing with the Axis powers. 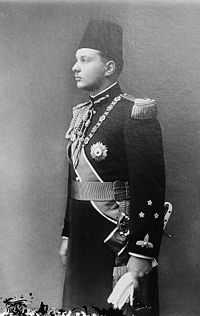 As he got older, the king began pilfering objects and artifacts while on state visits abroad, including a ceremonial sword from the Shah of Iran and a pocket watch from Winston Churchill. Common people were also often the victims of the kleptomaniacal monarch, and by mingling with commoners Farouk soon became a highly-skilled pickpocket. He got a nickname from his own citizens "The Thief of Cairo" to signify his well-known aptitude for thievery, as well as his lavish lifestyle and corrupt regime.

Widely condemned for his corrupt and ineffectual governance, the continued British occupation, and the Egyptian army's failure to prevent the loss of 78 percent of Palestine to the newly formed State of Israel in the 1948 Arab-Israeli War, public discontent against Farouk rose to new levels. Finally, on July 23, 1952, the Free Officers Movement under Muhammad Naguib and Gamal Abdel Nasser staged a military coup that launched the Egyptian Revolution of 1952. Farouk was forced to abdicate, and went into exile in Italy and Monaco where he lived the rest of his life. Immediately following his abdication, Farouk's baby son, Ahmed Fuad was proclaimed King Fuad II, but for all intents and purposes Egypt was now governed by the Naguib, Nasser and Free Officers. On June 18, 1953, the revolutionary government formally abolished the monarchy, ending 150 years of the Muhammad Ali dynasty's rule, and Egypt was declared a republic.

The revolutionary government quickly moved to auction off the king's vast collection of trinkets and treasures. Among the more famous of his possessions was one of the rare 1933 Double Eagle coins, though the coin disappeared before it could be returned to the United States.

The blue-eyed Farouk was thin early in his reign, but later gained enormous weight. His taste for fine cuisine made him dangerously obese, weighing nearly 300 pounds (136 kg)—an acquaintance described him as "a stomach with a head." He died in Rome, Italy on March 3, 1965. He collapsed and died at the dinner table following a characteristically heavy meal. His body was returned to Egypt and buried in the Mosque of Al Rifai' in Cairo.

In addition to an affair with the British writer and siren Barbara Skelton, among numerous others, the king was married twice, with a claim of a third marriage (see below). His first wife was Safinaz Zulficar (1921–1988), a pasha's daughter who was renamed Farida upon her marriage; they married in 1938, divorced in 1948, and had three daughters.

Whilst in exile in Italy he met Irma Capece Minutolo, an opera singer, who became his companion. In 2005, she claimed that she married the king in 1957. 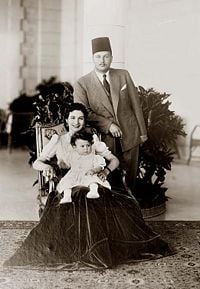 Effectively, Farouk was the last king of Egypt, since his son reigned for less than a year. Instead of moving with the times and with the mood of the people and shifting from autocracy towards a constitutional monarchy, he literally wasted his time in pursuit of pleasure.

In defense of his legacy, some point of that under Farouk the press was free, as were elections, there were few political prisoners and schools were built.[2]

Farouk is reported as having said: