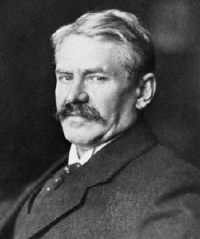 Ernst Troeltsch (February 17, 1865 – February 1, 1923) was a German Protestant theologian and writer on philosophy of religion and philosophy of history. He is an important figure in the early twentieth century liberal school of religious and philosophical thought in Germany. Like the young Paul Tillich, whom he influenced, Troeltsch was very concerned by the situation of Christianity in the contemporary secular environment and he was well aware of the limitations of the traditional theological perspective. In that context, Troeltsch sought to firmly establish religious, especially Christian, belief on a less dogmatic basis, taking into consideration the empirical data of the social and historical sciences. While avoiding the reductionism of positivism, psychologism, and even Kantian ethicism, he tried to unify the complementary elements of faith and science, idealism and empiricism, philosophy and theology, the absoluteness of religious norms and the relativity of historical circumstances. In this attempt, he was only partly successful.

Troeltsch also laid the groundwork for an inclusive perspective on world religions, tackling the problem of how one can acknowledge their shared elements and common values and also establish a legitimate standard of measurement.

Troeltsch completed his studies in Augsburg (his hometown), Erlangen, Berlin, and Göttingen, where he began his teaching career in 1891. In 1892, Troeltsch was appointed as full professor of systematic theology at the University of Bonn. In 1894, he moved to Heidelberg in the same capacity. In 1912, he became corresponding member of the Prussian Academy of Sciences. In 1914, he switched to become professor of philosophy in Berlin. This change from theology to philosophy was resented by some as a betrayal or as the admission that he had emptied theology of all its substance and was thus taking the logical next step. In fact, Troeltsch mostly pursued his lifelong dream of combining the two disciplines.

Troeltsch was also politically active. In 1919, he became a left-liberal member of the Prussian National Assembly (DDP) and undersecretary of State for religious affairs. Troeltsch died suddenly in 1923 as he was about to visit England for a series of lectures.

Troeltsch dealt extensively with the problem of historicism, the view that everything can only be understood in its historical context, hence that everything is relative to that context. This view, he felt, has merits in that it refused the dogmatic position divorced from reality, but ultimately, in its purest form, it becomes self-contradictory.

Equipped with encyclopedic knowledge and a dislike of arbitrary positions not backed by facts, Troeltsch passionately sought to reconcile different trends of religious and philosophical thought, as well as the two disciplines, theology and philosophy, resulting in his focus on the philosophy of religion. He acknowledged himself that his effort to produce a unified view, accounting for both absolute moral and religious givens and the relativity of empirical facts, remained an unfinished task at the end of his life.

Philosophy of religion: beyond positivism and empiricism

Troeltsch sought ways of refuting the limitations of both positivism and empiricism, which he saw as unduly restricting the scope of human reality, in particular the religious dimension. At the same time, he was well aware that the critical idealistic perspective which he adopted from Kant was a choice, rather than a position that could be proved logically. His rejection of positivism was thus essentially a rejection of its claims to give an irrefutable final answer to questions of meaning.

In empiricism, Troeltsch saw a similar limitation, as it restricts itself to factual statements derived from experience. He, however, had a great admiration for William James and his contribution to the understanding of the religious phenomenon, as expressed in his own “Empiricism and Platonism in the Philosophy of Religion – To the Memory of William James,” presented in 1904 during a visit to the United States. Troeltsch saw a weakness in the Kantian approach and its belief that insights gained from experience were largely irrelevant.

Troeltsch and the liberal tradition

In the tradition of German liberal theology since Friedrich Schleiermacher, Troeltsch opposed the rigid dogmatism of his Lutheran tradition as much as he opposed positivistic reductionism. As explained in his 1925 lectures entitled “Glaubenslehre,” a contemporary definition of Christianity could no longer rest on the assurance of the truth of revelation as a mere given, nor could it assume than the lights of natural theology automatically gave it a preeminent position. Thus, the undertaking of the philosophy of religion became central in his eyes.

For him, refusing legitimacy to the religious experience of other traditions in the name of Christian absolutism was an untenable position repudiated by experience and observation. The relative superiority of Christianity, in which he believed, had to be shown through a description of the whole development of the Christian tradition, including all aspect of life, experience and teachings as they had evolved through the ages, leading to greater ethical universality than that of other religions.

The essence of religion and the “religious a priori”

Troeltsch also made considerable effort to isolate the element that made religion what it is, the “essence of religion.” For him, like for his contemporary Rudolf Otto, the religious dimension of life had an irreducible identity of its own. In this, he opposed positivism and psychologism, which sought to explain religion in terms of psycho-somatic causes. But he also rejected Kant’s reduction of religion to the ethical dimension. There was, in his eyes, an “a priori” religious reality. For him, that reality could be best perceived in what he called “naïve religiosity” (by which he essentially meant mysticism and religious experience), as opposed to learned forms of religion.

While Rudolf Otto would analyze religion along very similar lines, Paul Tillich would object that, in this way, religion was made into an artificial entity without proper object, instead of being seen as an in-depth dimension of all aspects of life.

Troeltsch was an influential figure in German religious and social thought, especially before 1914. There has been renewed interest in his contribution since the 1960s. His work was a synthesis of a number of strands, drawing on the Neo-Kantian school, on theologian Albrecht Ritschl, but also on his friend Max Weber's conception of sociology. Troeltsch’s The Social Teachings of the Christian Church is a seminal work in the field of religion and society.

Troeltsch’s strong awareness of the influence of social and historical causes on the development of individual religious life had natural consequences on his personal attitude towards life. Through his political involvement, Troeltsch in particular sought to bring Germany away from what he considered had been a self-inflicted, catastrophic cultural isolation after World War I.

Retrieved from https://www.newworldencyclopedia.org/p/index.php?title=Ernst_Troeltsch&oldid=1035330
Categories:
Hidden category:
This page was last edited on 12 April 2020, at 22:36.
Content is available under Creative Commons Attribution/Share-Alike License; additional terms may apply. See Terms of Use for details.