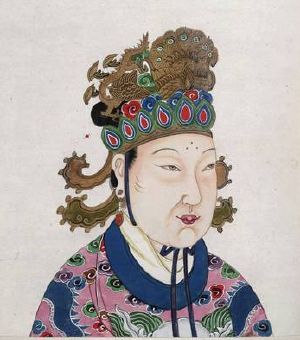 Wu Zetian (625 – December 16, 705), personal name Wu Zhao, was the only woman in the history of China to assume the title of Emperor although other women have acted as regents, usually until their sons reached adulthood. Ruling China first through puppet emperors from 665 to 690, not unprecedented in Chinese history, she then broke all precedents when she founded her own dynasty in 690, the Zhou, and ruled personally under the name Emperor Shengshen from 690 to 705. Her rise and reign has been criticized harshly by Confucian historians, for whom the proper role for women was as wives not rulers, thus "having a woman rule would be as unnatural as having a "hen crow like a rooster at daybreak,"[1] but has been viewed under a different light after the 1950s. She ruled China during one of its more peaceful and culturally diverse periods of history. She reduced the size of the army, introduced more scholars into governance and did much to promote the status of women, commissioning biographies of prominent women. She also promoted Buddhism, which she favored over Daoism. Although her acquisition of power was ruthlessly pursued and she created a secret police force to help retain power, her rule has been described as "benign."[1]

Her family was from Wenshui, part of Bing prefecture, now Wenshui county inside the prefecture-level city of Luliang and located 80 km (50 miles) southwest of Taiyuan, Shanxi province. Her father was Wu Shihuo (577-635), a member of a renowned Shanxi aristocratic family, and an ally of Li Yuan, the founder of the Tang Dynasty, in his conquest of power (Li was himself also from a renowned Shanxi aristocratic family). Her mother was Lady Yang (579-670), a member of the former Sui imperial family. Wu Zetian was not born in Wenshui, however, as her father was a high-ranking civil servant serving in various posts and locations along his life. The most serious claimant for her birth place is Li prefecture, now the prefecture-level city of Guangyuan, in the north of Sichuan province, some 800 km (500 miles) southwest of Wenshui, but other places have also been proposed, including the capital Chang'an.

She entered Emperor Taizong's harem most probably in 638 (other possible date: 636), and was made a cairen, i.e. one of the nine concubines of the fifth rank. Emperor Taizong gave her the name Mei, meaning "charming, beautiful." Thus, today Chinese people refer to her as Wu Meiniang (i.e. "Miss Wu Mei") when they write about her youth, whereas they refer to her as Wu Zetian or as Empress Wu when they write about her time in power. There was an incidence where Taizong became extremely displeased with her, but unable to kill her because of her beauty, he made her his personal servant, or binu, and took her with him everywhere he went.

In 649, Taizong died, and, as was customary for concubines, Wu Meiniang had to leave the imperial palace and enter a Buddhist nunnery where she had her hair shaved. Not long afterwards, most probably in 651, she was reintegrated into the imperial palace by Emperor Gaozong, son of Taizong, who had been enamoured by her beauty while visiting his father before his death. Gaozong's empress consort, from the Wang family, played a key role in the reintegration of Wu Meiniang in the imperial palace. The emperor at the time was greatly attached to a concubine from the Xiao family, and the empress hoped that the arrival of a new beautiful concubine would divert the emperor from the concubine née Xiao. Modern historians dispute this traditional history, and some think that the young Wu Zetian never actually left the imperial palace, and that she was probably already having an affair with the crown prince (who became Emperor Gaozong) while Emperor Taizong was still alive. Wherever the truth lies, it remains certain that by the early 650s Wu Zetian was a concubine of Emperor Gaozong, and she was titled zhaoyi, the highest ranking of the nine concubines of the second rank. Wu Zetian soon had the concubine née Xiao out of the way. The fact that the emperor had taken one of the concubines of his father as his own concubine, and what's more a nun, if traditional history is to be believed, was found to be utterly shocking by Confucian moralists.

In the year 654, Wu Zetian's baby daughter was killed. Empress Wang was allegedly seen near the child's room by eyewitnesses. She was suspected of killing the girl out of jealousy and was persecuted. Legend has it that Wu Zetian actually killed her own daughter, but the allegation may have been made up by her opponents or by Confucian historians. Soon after that, she succeeded in having the emperor create for her the extraordinary title of chenfei, which ranked her above the four concubines of the first rank and immediately below the empress consort. Then eventually, in November 655, the empress née Wang was demoted and Wu Zetian was made empress consort. Wu later had Wang and Xiao executed in a cruel manner—their arms and legs were battered and broken, and then they were put in large wine urns and left to die after several days of agony.

After Emperor Gaozong started to suffer from strokes from November 660 on, she began to govern China from behind the scenes. She was even more in absolute control of power after she had Shangguan Yi executed and the demoted crown prince Li Zhong forced to commit suicide in January 665, and henceforth she sat behind to the now silent emperor during court audiences (most probably, she sat behind a screen at the rear of the throne) and took decisions. She reigned in his name and then, after his death, in the name of subsequent puppet emperors (her son Emperor Zhongzong and then her younger son Emperor Ruizong), only assuming power herself in October 690, when she proclaimed the Zhou Dynasty, named after her father's nominal posthumous fief as well as in reference to the illustrious Zhou Dynasty of ancient Chinese history from which she claimed the Wu family was descended. In December 689, ten months before she officially ascended the throne, she had the government create the character Zhao, an entirely new invention, created along with 11 other characters in order to show her absolute power, and she chose this new character as her given name, which became her taboo name when she ascended the throne ten months later. The character is made up of two pre-existing characters: "Ming" up top meaning "light" or "clearness"; and "kong" on the bottom meaning "sky." The idea behind this is the implication that she is like the light shining from the sky. Even the pronunciation of the new character is exactly the same as "shine" in Chinese. On ascending the throne, she proclaimed herself Emperor Shengshen, the first woman ever to use the title emperor which had been created 900 years before by the first emperor of China Qin Shi Huang. Indeed she was the only woman in the 2100 years of imperial China ever to use the title emperor and to sit on the throne (instead of merely ruling from behind the throne), and this again utterly shocked Confucian elites.

Traditional Chinese political theory (see the similar Salic law) did not allow a woman to ascend the throne, and Empress Wu was determined to quash the opposition and promote loyal officials within the bureaucracy. During her reign, she formed her own Secret Police to deal with any opposition that might arise. She was also supported by her two lovers, the Zhang brothers (Zhang Yizhi, and his younger brother Zhang Changzong. She gained popular support by advocating Buddhism but ruthlessly persecuted her opponents within the royal family and the nobility. In October 695, after several additions of characters, her imperial name was definitely set as Emperor Tiance Jinlun Shengshen, a name which did not undergo further changes until the end of her reign. She achieved popular support through lowering taxes and initiating some agricultural reforms that benefited the peasants. She recruited civil servants based on merit, not birth.

On February 20, 705, now in her early eighties and ailing, Empress Wu was unable to thwart a coup, during which the Zhang brothers were executed. Her power ended that day, and she had to step down while Emperor Zhongzong was restored, allowing the Tang Dynasty to resume on March 3, 705. Empress Wu died nine months later, perhaps consoled by the fact that her nephew Wu Sansi, son of her half-brother and as ambitious and intriguing as she, had managed to become the real master behind the scenes, controlling the restored emperor through his empress consort with whom he was having an affair.

Although short-lived, the Zhou dynasty, according to some historians, resulted in better equality between the sexes during the succeeding Tang Dynasty.

Considering the events of her life, literary allusions to Empress Wu can carry several connotations: a woman who has inappropriately overstepped her bounds, the hypocrisy of preaching compassion while simultaneously engaging in a pattern of corrupt and vicious behavior, and ruling by pulling strings in the background.

The noted French author Shan Sa, born in Beijing, wrote a biographical novel called "Impératrice" (French for Empress) based on Empress Wu's life. It has been translated into English as "Empress" and Japanese as Jotei: wa ga na wa Sokuten Bukō (trans. "Female emperor: My name is Empress Wu Zetian"). Buddhism is said to have flourished during her reign. In addition to inviting eminent Buddhist scholars to China, she commissioned temples and Buddha-images, such as the Longmen carvings outside Luoyang. Confucian teaching had little appeal to her. Her legacy remains that of a strong women who rose to power at a time when rule by women was almost unthinkable. On the one hand, she could be ruthless but on the other she promoted the Buddhist virtues of non-violence and favored scholars to soldiers, decreasing the number of the latter and increasing those of the former. She was also a pioneer feminist, promoting women and appointing some to positions of responsibility.