Edward Teach (c. 1680[1] – November 22, 1718), better known as Blackbeard, was a notorious English pirate in the Caribbean Sea and western Atlantic during the early eighteenth century, a period referred to as the Golden Age of Piracy. His best known vessel was the Queen Anne's Revenge, which is believed to have run aground near Beaufort Inlet, North Carolina in 1718.[2]

A flag often attributed to Blackbeard.

Blackbeard often fought, or simply showed himself, wearing a big feathered tricorn, and having multiple swords, knives, and pistols at his disposal. It was reported in the General History of the Pirates that he had hemp and lighted matches woven into his enormous black beard during battle. Accounts of people who saw him fighting say that they thought he "looked like the devil" with his fearsome face and the smoke cloud around his head. This image, which he cultivated, has made him the premier image of the seafaring pirate.

Blackbeard's real name is thought to be Edward Teach. Nevertheless, he is referred to in some documents as Edward Thatch or even Edward Drummond. He is thought to have been born in Bristol, but some writers claim London, Philadelphia, or Jamaica as his home.[1] Teach went to sea at an early age. He served on an English ship in the War of the Spanish Succession, privateering in the Spanish West Indies and along the Spanish Main. After Britain withdrew from the war in 1713, Teach, like many other privateers, turned to piracy. 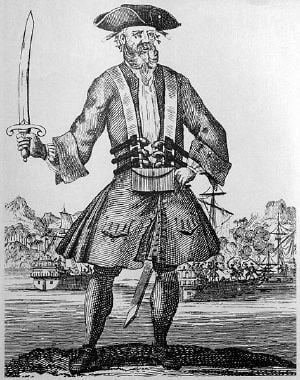 According to Charles Johnson, Blackbeard fought a running duel with the British thirty-gun man-of-war HMS Scarborough, which added to his notoriety. However, historian David Cordingly has noted that the Scarborough's log has no mention of any such battle.

Blackbeard would plunder merchant ships, forcing them to allow his crew to board their ship. The pirates would seize all of the valuables, food, liquor, and weapons. Ironically, despite his ferocious reputation, there are no verified accounts of him actually killing anyone. He generally prevailed by fear alone.

However, colorful legends and vivid contemporary newspaper portrayals had him committing acts of cruelty and terror. One tale claims he shot his own first mate, saying "if he didn’t shoot one or two [crewmen] now and then, they’d forget who he was." Another legend is that having had too much to drink, he said to his crew, "Come, let us make a hell of our own, and try how long we can bear it." Going into the ship's hold, they closed the hatches, filled several pots with brimstone and set it on fire. Soon the men were coughing and gasping for air from the sulphurous fumes. All except Blackbeard scrambled out for fresh air. When Blackbeard emerged, he snarled, "Damn ye, ye yellow-bellied sapsuckers! I'm a better man than all ye milksops put together!"[3] According to Captain Charles Johnson's A General History of the Robberies & Murders of the Most Notorious Pirates:

Before he sailed upon his adventures, he married a young creature of about sixteen years of age … and this I have been informed, made Teach's fourteenth wife … with whom after he had lain all night, it was his custom to invite five or six of his brutal companions to come ashore, and he would force her to prostitute herself to them all, one after another, before his face.

Teach had headquarters in both the Bahamas and the Carolinas. He lived on the island of Nassau where he was named the magistrate of the "Privateers Republic." Governor Charles Eden of North Carolina received booty from Teach in return for unofficial protection and gave him an official pardon. He left Nassau to avoid meeting with Royal Governor Woodes Rogers, unlike the majority of the pirate inhabitants who welcomed the governor and accepted the royal pardons he brought.

Blackbeard's chief claim to fame is his blockade of Charleston, South Carolina. In approximately late May of 1718, Blackbeard entered the mouth of Charleston harbor with the Queen Anne's Revenge and three lighter vessels. He plundered five merchant freighters attempting to enter or leave the port. No other vessels could transit the harbor for fear of encountering the pirate squadron.

Aboard one of the ships that Blackbeard captured in the harbor mouth was a group of prominent Charleston citizens, including Samuel Wragg. Blackbeard held these hostages for ransom, making an unusual demand: A chest of medicines. He sent a deputation ashore to negotiate this ransom. Due partly to his envoys' preference for carousing rather than bargaining, the ransom took some days to be delivered, and Blackbeard evidently came close to murdering his prisoners. Eventually, the medicines were turned over, and Blackbeard released the hostages, sans all their clothing but otherwise unharmed. Blackbeard's whole squadron then escaped northward.

Shortly afterward, Blackbeard ran two of his vessels aground at Topsail Inlet (now Beaufort Inlet), including the Queen Anne's Revenge. He has been accused by many, including his own crew, of doing this deliberately in order to downsize his crew and increase his own share of the treasure. Deliberate or not, he stripped three of the ships of all treasure, beached or marooned most of his crew, and went to Bath, North Carolina, where he finally accepted a pardon under the royal Act of Grace. He then went off to Ocracoke Inlet in the last of his four vessels, the sloop Adventure, to enjoy his loot.

Having accepted a pardon, Teach had apparently retired from piracy. However, Governor Alexander Spotswood of Virginia became concerned that the notorious freebooter lived nearby. Spotswood decided to eliminate Blackbeard, even though he lived outside of Spotswood's jurisdiction. 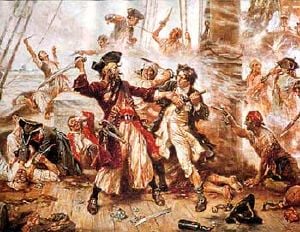 Blackbeard operated in coastal waters; it was difficult for ships of the line to engage him in battle. As such, two smaller hired sloops were therefore put under the command of Lieutenant Robert Maynard, with instructions from Spotswood to hunt down and destroy Blackbeard, offering a reward of £100, and smaller sums for the lesser crew members. Maynard sailed from James River on November 11, 1718, in command of thirty men from HMS Pearl, and twenty-five men and a midshipman of HMS Lyme, and in command of the hired sloops, the Ranger and Jane (temporarily commissioned as His Majesty's Ships to avoid accusations of piracy themselves). Maynard found the pirates anchored in a North Carolina inlet on the inner side of Ocracoke Island, on the evening of November 21. Maynard and his men decided to wait until the following morning because the tide would be more favourable. Blackbeard's Adventure had a crew of only nineteen, "Thirteen white and six Negroes," as reported to the Admiralty. A small boat was sent ahead at daybreak, was fired upon, and quickly retreated. Blackbeard's superior knowledge of the inlet was of much help, although he and his crew had been drinking in his cabin the night prior. Throughout the night Blackbeard waited for Maynard to make his move. Blackbeard cut his anchor cable and quickly attempted to move towards a narrow channel. Maynard made chase; however his sloops ran aground, and there was a shouted exchange between captains. Maynard's account says, "At our first salutation, he drank Damnation to me and my Men, whom he stil'd Cowardly Puppies, saying, He would neither give nor take Quarter," although many different versions of the dialogue exist. Eventually, Maynard's sloops were able to float freely again, and he began to row towards Blackbeard, since the wind was not strong enough at the time for setting sail. When they came upon Blackbeard's Adventure, they were hit with a devastating broadside attack. Midshipman Hyde, captain of the smaller HMS Jane, was killed along with six other men. Ten men were also wounded in the surprise attack. The sloop fell astern and was little help in the following action. Maynard continued his pursuit in HMS Ranger, managing to blast the Adventure's rigging, forcing it ashore. Maynard ordered many of his crew into the holds and readied to be boarded. As his ship approached, Blackbeard saw the mostly empty decks, assumed it was safe to board, and did so with ten men.

Maynard's men emerged, and the battle began. The most complete account of the following events comes from the Boston News-Letter:[4]

Maynard and Teach themselves begun the fight with their swords, Maynard making a thrust, the point of his sword against Teach's cartridge box, and bent it to the hilt. Teach broke the guard of it, and wounded Maynard's fingers but did not disable him, whereupon he jumped back and threw away his sword and fired his pistol which wounded Teach. Demelt struck in between them with his sword and cut Teach's face pretty much; in the interim both companies engaged in Maynard's sloop. Later during the battle, while Teach was loading his pistol he finally died from blood loss. Maynard then cut off his head and hung it from his bow.

Despite the best efforts of the pirates (including a desperate plan to blow up the Adventure), Teach was killed, and the battle ended. Teach was reportedly shot five times and stabbed more than twenty times before he died and was decapitated. Legends about his death immediately sprang up, including the oft-repeated claim that Teach's headless body, after being thrown overboard, swam between 2 and 7 times around the Adventure before sinking. Teach's head was placed as a trophy on the bowsprit of the ship (it was also required by Maynard to claim his prize when he returned home). After the sheer terror of the battle with the pirates, and the wounds that the crew received, Maynard still only acquired his meager prize of £100 from Spotswood. Later, Teach's head hung from a pike in Bath.

An actor costumed as Blackbeard

History has romanticized Blackbeard. Many popular contemporary engravings show him with the smoking lit ends of his pigtails or with lit cannon fuses in his hair and the pistols stuck in his bandoliers, and he has been the subject of books, movies, and documentaries. There is a Blackbeard Festival in Hampton, Virginia every year[5] and the crew of the modern day British warship HMS Ranger commemorate his defeat at the annual Sussex University Royal Naval Unit Blackbeard Night mess dinner in November.[6]

Another legend published in coastal North Carolina holds that Captain Teach's skull was used as the basis for a silver drinking chalice. The author, later a North Carolina judge, claimed to have drunk from it one night in the 1930s at a closed dinner while in college.

There is significant evidence supporting the claims that Teach was prone to burying treasure. In times as desperate and difficult as the American Revolution, it was common for the ignorant, credulous, and desperate to dig along these banks in search of hidden treasures; impostors found an ample basis in these rumors for schemes of delusion. A ship believed to have been Blackbeard's was discovered near Beaufort, North Carolina, in 1996, and is now part of a major tourist attraction.

Retrieved from https://www.newworldencyclopedia.org/p/index.php?title=Edward_Teach&oldid=1061057
Categories:
Hidden category:
This page was last edited on 3 December 2021, at 03:34.
Content is available under Creative Commons Attribution/Share-Alike License; additional terms may apply. See Terms of Use for details.