The Eagles are an American rock band that was formed in Los Angeles, California, during the early 1970s. With five number one singles and six number one albums, the Eagles were one of the most successful recording acts of the decade. They are also the best-selling American group in history.

At the end of the twentieth century, two of their albums, Eagles: Their Greatest Hits 1971–1975 and Hotel California, ranked among the ten best-selling albums of all time according to the Recording Industry Association of America. Their studio album, Hotel California, is rated as thirty-seventh on the Rolling Stone list "500 Greatest Albums of All Time."

The Eagles broke up in 1980, but reunited in 1994 for Hell Freezes Over, a mix of live and new studio tracks. They have toured intermittently since then, and were inducted into the Rock and Roll Hall of Fame in 1998.

In 2007, the Eagles released Long Road out of Eden, their first full studio album in 28 years. In 2013, they began the extended History of the Eagles Tour in conjunction with the band's documentary release, History of the Eagles. The tour concluded in the summer of 2015. They were chosen for the 2015 Kennedy Center Honors to be held on December 6 of that year, but postponed their appearance due to Glenn Frey's poor health. Frey died a month later in January 2016. 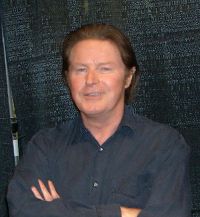 The seeds for the Eagles were planted when Linda Ronstadt's then-manager John Boylan recruited session musicians Glenn Frey, Bernie Leadon, and Randy Meisner to back Ronstadt. They were missing a drummer until Frey telephoned Don Henley, whom he had met at the Troubadour club in Los Angeles. The group auditioned for Ronstadt, and the band backed her on a two-month tour and on her 1970 album, Silk Purse. After their tenure with Ronstadt, and with her encouragement, they decided to form their own band, signing with Asylum Records, the new label started by David Geffen. Geffen and partner Elliot Roberts also initially managed the band. The group chose the name Eagles as a nod to The Byrds. Leadon had been in Dillard & Clark with former Byrds singer Gene Clark and in The Flying Burrito Brothers with former Byrds Gram Parsons, Chris Hillman, and Michael Clarke.

The Eagles' self-titled debut album was quickly recorded and released in June 1972. Eagles was filled with natural, sometimes innocent country rock, and yielded three Top 40 singles. The first single and lead track, "Take It Easy," was a song written with Frey's help by his neighbor and fellow country-folk rocker Jackson Browne. Frey heard Browne recording the song, contributed two lines to it (for which he got co-writing credit), and asked if the Eagles could use it. The song reached number 12 on the Billboard Hot 100 and propelled the Eagles to stardom. The single was followed by the bluesy "Witchy Woman" and the soft country rock ballad, "Peaceful Easy Feeling," charting at number nine and number 22 respectively. The Eagles soon became a major force in popularizing the Southern California country rock sound around the nation. Rolling Stone magazine's 2003 list of the "500 Greatest Albums of All Time" ranked Eagles at number 374.

Their second album, Desperado, with its Old West outlaw theme, drew comparisons between outlaw lifestyles and those of modern rock stars. It was during the recording sessions that Don Henley and Glenn Frey began collaborating as songwriters, co-writing eight of the album's 11 songs, including "Tequila Sunrise" and "Desperado." The bluegrass-oriented songs "Twenty-One" and "Doolin' Dalton," and the ballad "Saturday Night" showcased guitarist Bernie Leadon's abilities on the banjo, fingerpicked guitar, and mandolin. The album was less successful than the first, reaching number 41 on the U.S. pop album charts. Its two singles, "Tequila Sunrise," and "Outlaw Man," reached number 61 and number 59 on the pop charts, respectively. However, "Desperado" would become a concert favorite, which has been much covered.

For their next album, On the Border, Henley and Frey wanted the band to break away from its country style and move more toward hard rock. The the band turned to Bill Szymczyk to produce the most of the album, and Szymczyk brought in Don Felder to add slide guitar to some sessions. He appeared on only two songs on the album, but the band was so impressed with him that they invited Felder to become the fifth Eagle. The album yielded a number one single with "Best of My Love," which hit the top of the charts on March 1, 1975, becoming the Eagles' first of five chart toppers.

One of These Nights (Leadon leaves)

Their next album, One of These Nights, had an aggressive, sinewy rock stance. The album further displayed the growing strength of the Henley/Frey songwriting team, particularly on the title track and the Grammy Award winning "Lyin' Eyes." "One of These Nights" hit number one on the Billboard chart on August 2, 1975. The song itself has often been cited by Frey as his all-time favorite Eagles' tune.

By this time, however, relations among the members of the band had become strained. Between the release of One of These Nights and the subsequent tour, Bernie Leadon left the group, disillusioned with the direction the band's music was taking and his own diminished role after Felder was hired. Leadon was dating Patti Davis, Ronald Reagan's daughter which also created political tensions within the group. Leadon left the band in December 1975, famously announcing his resignation by pouring a beer over Frey's head. The group quickly replaced Leadon with veteran singer and guitarist Joe Walsh.

Meanwhile, in early 1976, Their Greatest Hits (1971–1975) was released. It went on to become the best-selling album in U.S. history, selling over 29 million copies in the United States to date.

The group's next album, Hotel California, came out in December 1976. "New Kid in Town" was a number one hit in February 1977, and the title track hit number one in May. Told during a 60 Minutes interview in 2007 about the meaning of surrealistic "Hotel California," Don Henley replied, "It's a song about the dark underbelly of the American Dream, and about excess in America." "Life in the Fast Lane" was also a major success, establishing Joe Walsh's position in the band with its more hard rock sound. The album concluded with "The Last Resort," a song Frey refers to as Don Henley's greatest work.

Hotel California has appeared on several lists of the best albums of all time. It is the Eagles' best-selling studio album, with over 16 million copies sold to date in the United States.

After the tour, Randy Meisner left the band and moved back to his native Nebraska, where he began a solo career. The band replaced Meisner with the man who had succeeded him in Poco, Timothy B. Schmit.

In 1977, the Eagles began to produce their next studio album, The Long Run. The album took two years to make, but yielded the group's fifth and last number one single, "Heartache Tonight" (November 10, 1979).

On July 31, 1980, in Long Beach, California, hard feelings among the band, tempers flaired, especially between Frey and Felder, and boiled over publicly on stage. The band appeared ready to split up, but it still owed Warner Bros. a live record from the tour. Eagles Live (released in November 1980) was mixed by Frey and Henley on opposite coasts. With credits that listed no fewer than five attorneys, the album's liner notes simply said, "Thank you and goodnight." 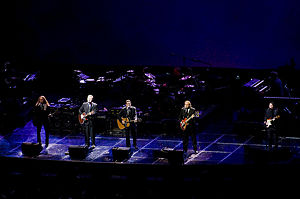 The ensuing tour spawned a live album titled Hell Freezes Over, named for Henley's recurring statement that the group would get back together "when Hell freezes over." The album debuted at number one on the Billboard album char, and included four new studio songs, with "Get Over It" and "Love Will Keep Us Alive" both becoming top-40 hits. The album itself proved as successful as the reunion tour, selling 6 million copies in the United States alone. The tour was interrupted in September 1994, due to Frey's recurrence of diverticulitis, but it resumed in 1995 and continued into 1996.

In 1998, the Eagles were inducted into the Rock and Roll Hall of Fame. During the induction ceremony, Frey, Henley, Felder, Walsh, and Schmit performed together, and former members Bernie Leadon and Randy Meisner rejoined the band for the performance for "Take It Easy" and "Hotel California." Several subsequent reunion tours followed (without Leadon or Meisner), notable for their record-setting ticket prices.

The Eagles performed a Millennium Eve's concert at the Staples Center in Los Angeles on December 31, 1999, marking the last time Don Felder played with the band. The concert was released on CD as part of the four-disc Selected Works: 1972-1999 box set in November 2000.

Hole in the World

In 2003, the Eagles released a new greatest hits album The Very Best of the Eagles. The two-disc compilation was the first that encompassed their entire career, from Eagles to The Long Run. The album also included a new single, the September 11-themed Hole in the World. The album debuted at number three on the Billboard charts and eventually gained triple platinum status.

On June 14, 2005, the Eagles released a new two-DVD set titled Farewell 1 Tour-Live from Melbourne featuring two new songs: Glenn Frey's "No More Cloudy Days" and Joe Walsh's "One Day at a Time." A special edition 2006 release exclusive to Wal-Mart and affiliated stores also included a bonus audio CD with three new songs: A studio version of "No More Cloudy Days" plus "Fast Company" and "Do Something."

Long Road out of Eden

On October 30, 2007, the Eagles released Long Road out of Eden, their first album of all-new material since 1979. The album debuted at number one in the United States, the United Kingdom, Australia, New Zealand, Netherlands, and Norway. The Eagles made their awards show debut on November 7, 2007, when they performed "How Long" live at the Country Music Association Awards.

On March 20, 2008, the Eagles launched their world tour in support of Long Road out of Eden at The O2 Arena in London, England.

History of the Eagles

In February 2013, the Eagles released a career-spanning documentary called History of the Eagles and began the supporting tour with 11 US arena dates from July 6 to 25. Original Eagles guitarist Bernie Leadon also appeared on the tour. The tour expanded internationally and continued until July 29, 2015.

Did you know?
The Eagles are the highest-selling American band in U.S. history

The Eagles were inducted into the Rock and Roll Hall of Fame in 1998 and into the Vocal Group Hall of Fame in 2001. On December 7, 1999, the Recording Industry of America honored the group with the Best Selling Album of the Century for Their Greatest Hits (1971–1975).

The group ranked number 34 on CMT's 40 Greatest Men of Country Music in 2003. They were one of only four acts who were either a duo or a group on the list, the others being Alabama at number 11, Flatt & Scruggs at number 24, and Brooks & Dunn at number 25. On May 16, 2008, the Eagles were featured on the front cover of the Rolling Stone Magazine.

The Eagles, along with three other bands, were included in the popular 2008 video game, Guitar Hero World Tour.

The group was chosen for the 2015 Kennedy Center Honors to be held on December 6 of that year, but postponed the award for a year because of Glenn Frey's poor health. Frey died a month later.