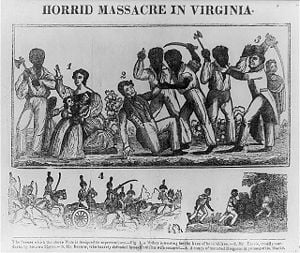 The Nat Turner revolt (1831). Walker defended violent rebellion by blacks against the sin of slavery.

David Walker (September 28, 1785 – June 28, 1830) was an African-American abolitionist, most famous for his pamphlet Appeal to the Coloured Citizens of the World, which called for black pride, demanded the immediate and universal emancipation of the slaves, and defended violent rebellion as a means for the slaves to gain their freedom.

The son of a slave father and a free black mother, Walker was born in Wilmington, North Carolina, perhaps in 1796 or 1797. In accordance with existing laws, since his mother was a free black, he was also free. This freedom, however, did not shield him from witnessing firsthand the degradations and injustices of slavery. He witnessed much misery in his youth. Walker traveled throughout the country, eventually settling in Boston. But even in that free northern city, with its prevalent discrimination, life was less than ideal for its black residents. Still, Walker apparently fared well, setting up a used-clothing store during the 1820s.

In Boston, Walker began to associate with prominent black activists. He joined institutions that denounced slavery in the South and discrimination in the North. He became involved with the nation's first African-American newspaper, the Freedom's Journal out of New York City, to which he frequently contributed. By the end of 1828, he had become Boston's leading spokesman against slavery.

In September of 1829 he published his Appeal. To reach his primary audience—the enslaved men and women of the South—Walker relied on sailors and ship's officers sympathetic to the cause who could transfer the pamphlets to southern ports. Walker even employed his clothing business to this end which, being located close to the waterfront, served sailors who bought clothing for upcoming voyages. He sewed copies of his pamphlet into the lining of sailors' clothing. Once the pamphlets reached the South, they could be distributed throughout the region. Walker also sought the aid of various contacts in the South who were also sympathetic to the cause.

David Walker published a third edition of his Appeal in June of 1830. Two months later he was found dead in his home.

Walker's father was a slave and his mother was free. According to North Carolina law, children born to free mothers were also free. Although Walker was not a slave, he was familiar with the cruelty of slavery. He had traveled throughout the South where he witnessed many inhumane accounts, including one where a son was forced to whip his mother to death. It was experiences like this, which most likely influenced his passion for the abolition of slavery. Walker moved to Boston in 1826. Like other blacks, he faced discrimination, but was able to open a used clothing store along the waterfront in 1827.

While in Boston, he met prominent black activists and became involved in the anti-slavery movement. He was active in the Underground Railroad, helped fugitive slaves with clothing, and wrote numerous articles for the New York City-based, African-American newspaper, the Freedom's Journal. In Boston, Walker made acquaintances with black rights activists and began to write and speak against slavery and racism, and, in 1828, he joined the Massachusetts General Colored Association, which had been organized in 1826.

Walker’s most notable contribution to abolitionism was his 76-page pamphlet of the Appeal to the Coloured Citizens of the World on September 28, 1829. The publication was a result of years of research of such topics as history, sociology, philosophy, and theology. Its message was directed to slaves and to all Africans throughout the world who were in bondage.

Walker also attacked Thomas Jefferson's argument that blacks, while deserving of liberty, were inferior to whites. In response to Jefferson, Walker wrote: "It is indeed surprising, that a man of such great learning...should speak so of a set of men in chains. I do not know what to compare it to, unless, like putting one wild deer in an iron cage, where it will be secured...then let it go, and expect the one in the cage to run as fast as the one at liberty."

Walker considered slavery to be a sin, concluding that God would punish the nation because of it. He also used the Declaration of Independence to provide support for the right of a revolution and natural rights. He argued:

Walker's Appeal caused a stir among slaveholders and slaves. In it, Walker argued that armed resistance was justified and should be used if necessary. As could be expected, slaveholders feared that it would cause slave uprisings. Slaves on the other hand, were encouraged by its message. It was common for groups of slaves to gather and listen to the reading of the text. Depending upon whether one was a slave or a slaveholder, the Appeal had become both dangerous and inspiring.

Southern states were quick to respond to the Appeal’s publication. Georgia and Louisiana passed legislation that made distribution of it illegal. North Carolina passed a law prohibiting slaves from being taught to read. In addition to the enactment of laws, a $10,000 reward was offered for Walker, either dead or alive.

On June 18, 1830, Walker died just months after completing the third edition of the Appeal. Walker’s sudden and mysterious death caused speculation that he was poisoned, although there was no evidence supporting the allegation. Later scholarship suggests he died of tuberculosis, the same disease that killed his daughter.

Social impact of the Appeal

In the Appeal, Walker argued that African Americans suffered more than any other people in the history of the world, and identified four causes for their "wretchedness:"

Walker's pamphlet called for immediate, universal, and unconditional emancipation—an uncommon position, even among antislavery activists in the 1820s. He openly praised slaves who used violence in self-defense against their masters and overseers, and suggested that slaves kill their masters in order to gain freedom.

Walker distributed his work through black civic associations in Northern cities and tried many different schemes to get the pamphlet to slaves and free blacks in the South. By 1830, outraged white authorities in the Southern states had begun a campaign to suppress it. In New Orleans, four black men were arrested for owning it, and vigilantes attacked free blacks in Walker's home in Wilmington. In Savannah, Georgia, the white authorities seized dozens of copies smuggled in by black sailors, banning black seaman from coming ashore at the city's port (Mayer 83, 84). Plantation owners offered a $3,000 bounty for Walker's death, and a $10,000 reward for anyone who brought him to the South alive.

The Appeal made a great impression in the South, with both slaves and slaveholders. To the slaves the words were inspiring and instilled a sense of pride and hope. Horrified whites, on the other hand, passed laws that forbade blacks to learn to read and banned the distribution of antislavery literature. Friends concerned about his safety implored him to flee to Canada. Walker responded that he would stand his ground. "Somebody must die in this cause," he added. "I may be doomed to the stake and the fire, or to the scaffold tree, but it is not in me to falter if I can promote the work of emancipation." A devout Christian, he believed that abolition was a "glorious and heavenly cause."

The Appeal was controversial even among abolitionists, and sparked debates that in many ways anticipated later debates over black nationalism and Black Power. Many white abolitionists, such as Benjamin Lundy, condemned it as inflammatory, and argued that it appealed to the worst passions of vengeance. William Lloyd Garrison expressed mixed feelings, criticizing the appeal to violence on the grounds of his religious pacifism, while arguing that Walker's call for violent revolution against slave-holders was the logical extension of the principles behind the American revolution, and that "if any people were ever justified in throwing off the yoke of their tyrants, the slaves are that people."

David Walker gave hope and pride to black slaves and his objective was nothing short of revolutionary. He would arouse slaves of the South into rebelling against their masters. His tool would be his own pamphlet, the Appeal, a document that has been described as "for a brief and terrifying moment…the most notorious document in America."[1]

Retrieved from https://www.newworldencyclopedia.org/p/index.php?title=David_Walker_(abolitionist)&oldid=1071499
Categories:
Hidden category:
This page was last edited on 27 June 2022, at 05:10.
Content is available under Creative Commons Attribution/Share-Alike License; additional terms may apply. See Terms of Use for details.