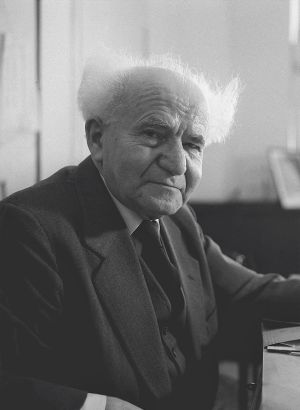 David Ben-Gurion (October 16, 1886 – December 1, 1973) was the first and third prime minister of Israel. A tough and uncompromising leader, he was instrumental in the founding of the state of Israel at the expiration of the British Mandate of Palestine, carrying Israel through the Arab-Israeli War of 1948 following Israel’s declaration of independence, and leading the country in its first years of existence, not retiring until 1970.

Ben-Gurion was a man with high moral standards, wisdom, and flexibility to change his outlook on situations as circumstances changed. His compassion and respect for the rights of the Arab residents of Israel is well documented through his words and deeds. However, it could be said that his original perspective that Arabs in Palestine and surrounding areas would also benefit from the establishment of a Jewish state was a naive and idealistic perspective.[1] Nonetheless, he spent his entire adult life orchestrating the creation and operation of the Jewish homeland of Israel. His leadership during the early years of Israel's existence, when the nation's survival seemed uncertain, saw Israel defeat better equipped enemies and emerge as a viable state. Unfortunately, especially after the Six-Day War of 1967, this was increasingly at the expense of the Palestinian Arabs, many of whom had become displaced people. As refugees they lived in what had become Israeli occupied territory in the West Bank and Gaza Strip.

To Ben-Gurion’s credit, although he may not have thought through all of the issues involved in achieving a secure homeland for Jews and a just settlement for Palestinians, he was against occupation of Arab land and expansion of Israeli territory. Ben-Gurion can properly be considered the father of the modern nation of Israel, just as his namesake, David, could be said to have founded the ancient Kingdom of Israel.

Ben-Gurion was born David Grün in Płońsk, Poland, which was then part of the Russian Empire. His father, Avigdor Grün, was a lawyer and a leader in the Hovevei Zion organization. His mother, Scheindel died when David was 11 years old.

As a boy, David attended a Hebrew school founded by his father. At age eighteen he became a teacher at the Warsaw Jewish School.

Ben-Gurion was influenced by his father's commitment to Zionism. The pogroms and rampant anti-Semitism that plagued Jewish life in Eastern Europe served to reinforce the views he inherited from his father. He became an ardent Zionist and socialist. In 1906, at age twenty, he moved to Palestine.

He first worked as an agricultural laborer in the orange groves and vineyards. Experience as a farmworker planted the seed for his perspective that the land of Palestine would be conquered through Jewish labor. Later, he became a journalist. It was during this time that he adopted his Hebrew name Ben-Gurion as he was beginning his political career.

Ben-Gurion was expelled from Palestine—then under the rule of the Ottoman Empire—in 1915 due to his political activism. This led to his decision to move to America.

Settling in New York City in 1915, he met the Russian-born Paula Munweis. They were married in 1917 and had three children. Paula was an integral part of all aspects of his life until her death in 1968.

He joined the British Army in 1918 as part of the 38th Battalion of the Jewish Legion (following the Balfour Declaration in November 1917). He and his family returned to Palestine after World War I following its capture by the British from the Ottoman Empire.

Ben-Gurion was at the political forefront of the Labor Zionist movement during the fifteen years leading to the creation of the State of Israel when Labor Zionism had become the dominant tendency in the World Zionist Organization.

An austere, ascetic idealist, he was driven by a commitment to establishing a Jewish state. In the Israeli declaration of independence, he stressed that the new nation would "uphold the full social and political equality of all its citizens, without distinction of race, creed or sex." This showed that Ben-Gurion was not an ethnocentric but that he had a big mind and heart and an equally big vision for the Jewish homeland.

He learned Spanish so that he could read Miguel de Cervantes' novel Don Quixote de la Mancha in its original language, a book he considered a prerequisite to becoming an effective statesman. This achievement demonstrated his fierce will and determination to learn whatever he needed to learn to accomplish what he envisioned.

Ben-Gurion encouraged Jews to join the British military to fight against the Nazis during the same time period that he helped orchestrate the illegal immigration of thousands of European Jewish refugees to Palestine. His awareness of the crisis level of suffering of European Jews caused him to make decisions and take actions that he probably otherwise wouldn't have. The British sought to bar new Jewish immigration and Arab residents of Palestine were gravely concerned about how the escalation of Jewish immigration would affect them. He persisted in his efforts as the immigrants had no where else to turn and were not safe if they stayed where they were.

He is considered the architect of both the Federation of Jewish Labor, the Histadrut (which created a Jewish state within the British state), and the Haganah. Haganah was the paramilitary force of the Labor Zionist movement that facilitated underground immigration, defended kibbutzim (collective farms/communes) and other Jewish settlements against attack and provided the backbone of the future Israeli Defense Forces. Both of these developments put pressure on the British to either grant the Jews a state in Palestine or quit the League of Nations Mandate. They did the latter in 1947 on the heels of a United Nations resolution partitioning the territory between the Jews and Arabs.

During the pre-statehood period in Palestine, Ben-Gurion represented the mainstream Jewish establishment and was known as a moderate. The British frequently partnered with Haganah during this time. Sometimes Haganah was used to arrest more radical groups involved in resistance against the British. Ben-Gurion was strongly opposed to the Revisionist Zionist movement led by Ze'ev Jabotinsky (1880-1940) and his successor Menachem Begin.

He was involved in occasional violent resistance during the short period of time his organization cooperated with Begin's paramilitary Irgun (Irgun Tsvai Leumi, National Military Organization). However, he refused to be involved in terrorism of any kind, and insisted that violence only be used against military targets. Ben-Gurion initially agreed to Begin's plan to carry out the King David Hotel bombing, with the intent of humiliating (rather than killing) the British military stationed there. However, when the risks of mass killing became apparent, Ben-Gurion told Begin to call the operation off; Begin refused.[2] He respected the reality at the time that military action had its place but he did not believe in the gratuitous taking of lives.

He passed the resolution to declare the independence of Israel on May 14, 1948, by vote of 6 to 4, against strong opposition from both sides of the political spectrum of the Jewish community in Palestine, even from within his own party.

During the first weeks of Israel's independence, he passed the decision to disband all resistance groups and replace them with a single formal army, the Israel Defense Forces (IDF). To that end, Ben-Gurion gave the order to open fire upon and sink a ship named Altalena, which carried ammunition for the Irgun (also called Etzel) resistance group, a command that remains controversial to this day.

Ben-Gurion led Israel during its 1948 War of Independence (the Arab-Israeli war). He became prime minister on February 25, 1949, the day after the first 1949 Armistice Agreement with Egypt was signed to end hostilities. He remained in that post until 1963, except for a period of nearly two years between 1954 and 1955.

As prime minister, he oversaw the establishment of the state's institutions, demonstrating innate leadership and strategic planning capability well beyond his level of formal education. He presided over various national projects aimed at the rapid development of the country and its population: Operation Magic Carpet, the airlift of Jews from Arab countries, the construction of the National Water Carrier, rural development projects and the establishment of new towns and cities. In particular, he called for pioneering settlement in outlying areas, especially in the Negev Desert.

In 1953 Ben-Gurion announced his intention to withdraw from government and settle in the Kibbutz Sde-Boker, in the Israeli Negev. He returned to office in 1955 assuming the post of defense minister and later prime minister once again.

Following his return to government, Ben-Gurion collaborated with the British and French to plan the 1956 Sinai War. Israel stormed the Sinai Peninsula in retaliation for raids by Egypt. This gave British and French forces a pretext to intervene in order to secure the Suez Canal after Egyptian president Gamal Abdel Nasser had announced its nationalization. Intervention by the United States and the United Nations forced the British, French and Israelis to back down.

Ben-Gurion was among the founders of Mapai, Israel's labor/socialist party, which governed Israel during the first three decades of its existence.

In 1963 Ben-Gurion stepped down as prime minister on personal grounds and nominated Levi Eshkol (1895-1969) to be his successor. 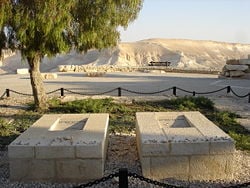 The gravesite of Ben-Gurion and his wife, Paula, in Israel’s Negev Desert

One year later a rivalry developed between the two on the issue of the Lavon Affair (the covert bombing of foreign interests in Egypt). Ben-Gurion broke with the party in June 1965 over Eshkol's handling of the Lavon affair and formed a new party, Rafi, which won ten seats in the Knesset (Israel's parliament).

As tensions loomed before the outbreak of the Six-Day War in 1967, Ben-Gurion strongly urged that Israel must have a “Great Power” on its side. In spite of this, none of the Great Powers came to Israel's aid. Even though they were not involved, both the U.S. and Britain were accused of helping Israel during the Six-Day War. After the war ended with large Israeli territorial gains, Ben-Gurion argued that other than keeping a united Jerusalem, Israel should not occupy more Arab land.

In 1968, when Rafi merged with Mapai to form the Labour Alignment, Ben-Gurion refused to reconcile with his old party and formed another new party, The State List, which won four seats in the 1969 election.

Ben-Gurion retired from politics in 1970 and spent his last years on his kibbutz. He passed away on December 1, 1973.

He was later voted by Time Magazine as one of the top 100 people who shaped the twentieth century.[3]

Retrieved from https://www.newworldencyclopedia.org/p/index.php?title=David_Ben_Gurion&oldid=1071320
Categories:
Hidden category:
This page was last edited on 25 June 2022, at 21:50.
Content is available under Creative Commons Attribution/Share-Alike License; additional terms may apply. See Terms of Use for details.