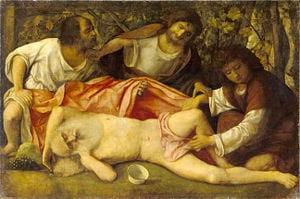 The Drunkenness of Noah by Giovanni Bellini, depicting Ham (center) laughing at his father, while Shem and Japheth cover him.

The Curse of Ham (also called the curse of Canaan) refers to the curse that Ham's father, Noah, placed upon Ham's youngest son, Canaan, after Ham "saw his father's nakedness" because of drunkenness in Noah's tent. It is related in the Book of Genesis 9:20-27.

The "curse of Ham" had been used by some members of Abrahamic religions to justify racism and the enslavement of people of African ancestry, who were believed to be descendants of Ham. They were often called Hamites and were believed to have descended through Canaan or his older brothers. This racist theory was widely held during the eighteenth to twentieth centuries, but it has been largely abandoned since the mid-twentieth century by even the most conservative theologians.

Did you know?
In the Genesis story Ham is not cursed directly but rather his youngest son, Canaan

The story of the "curse of Ham" comes from Genesis 9:20-27, which describes Noah's family following the flood:

20 And Noah began to be an husbandman, and he planted a vineyard: 21 And he drank of the wine, and was drunken; and he was uncovered within his tent. 22 And Ham, the father of Canaan, saw the nakedness of his father, and told his two brethren without. 23 And Shem and Japheth took a garment, and laid it upon both their shoulders, and went backward, and covered the nakedness of their father; and their faces were backward, and they saw not their father's nakedness. 24 And Noah awoke from his wine, and knew what his younger son had done unto him. 25 And he said, Cursed be Canaan; a servant of servants shall he be unto his brethren. 26 And he said, Blessed be the LORD God of Shem; and Canaan shall be his servant. 27 God shall enlarge Japheth, and he shall dwell in the tents of Shem; and Canaan shall be his servant.

Ham is not directly cursed for his actions; instead the curse falls upon his youngest son Canaan. The curse seems unusually severe for merely observing Noah unclothed. An explanation sometimes offered notes that the phrase "expose father's nakedness" is used several times elsewhere in the Pentateuch as a euphemism for having sexual relations with one's mother, suggesting a different crime as described in the following passages:

Interpretations of the curse of Ham

The Torah assigns no racial characteristics or rankings to Ham. Moses married a Cushite, one of the reputed descendants of Ham, according to the Book of Numbers, Chapter 12. Despite this, a number of early Jewish writers have interpreted the Biblical narrative of Ham in a racial way. The Babylonian Talmud, Sanhedrin 108b states, "Our Rabbis taught: Three copulated in the ark, and they were all punished—the dog, the raven, and Ham. The dog was doomed to be tied, the raven expectorates, and Ham was smitten in his skin" (Talmud Bavli, Sanhedrin 108b). The nature of Ham's "smitten" skin is unexplained, but later commentaries described this as a darkening of skin. A later note to the text states that the "smitten" skin referred to the blackness of descendants, and a later comment by rabbis in the Bereshit Rabbah asserts that Ham himself emerged from the ark black-skinned.[1] The Zohar states that Ham's son Canaan "darkened the faces of mankind."[2]

Some Biblical scholars see the "curse of Ham" story as an early Hebrew rationalization for Israel's conquest and enslavement of the Canaanites, who were presumed to descend from Canaan.[3]

Many pre-modern Christian sources discussed the curse of Ham in connection with race and slavery:

For the Egyptians are prone to a degenerate life and quickly sink to every slavery of the vices. Look at the origin of the race and you will discover that their father Cham, who had laughed at his father’s nakedness, deserved a judgment of this kind, that his son Chanaan should be a servant to his brothers, in which case the condition of bondage would prove the wickedness of his conduct. Not without merit, therefore, does the discolored posterity imitate the ignobility of the race [Non ergo immerito ignobilitatem decolor posteritas imitatur] (Homilies on Genesis 16.1).

When Noah awoke…he cursed him and said: "Cursed be Ham and may he be slave to his brothers" … and he became a slave, he and his lineage, namely the Egyptians, the Abyssinians, and the Indians. Indeed, Ham lost all sense of shame and he became black and was called shameless all the days of his life, forever.

When Noah cursed Canaan, “instantly, by the force of the curse… his face and entire body became black [ukmotha]. This is the black color which has persisted in his descendents.”

Eutychius, Alexandrian Melkite patriarch (d. 940): “Cursed be Ham and may he be a servant to his brothers… He himself and his descendants, who are the Egyptians, the Negroes, the Ethiopians and (it is said) the Barbari.”

Ibn al-Tayyib (Arabic Christian scholar, Baghdad, d. 1043): “The curse of Noah affected the posterity of Canaan who were killed by Joshua son of Nun. At the moment of the curse, Canaan’s body became black and the blackness spread out among them.”[4]

“‘And Ham, the father of Canaan, saw the nakedness of his father and showed [it] to his two brothers.’ That is…that Canaan was cursed and not Ham, and with the very curse he became black and the blackness was transmitted to his descendents…. And he said, ‘Cursed be Canaan! A servant of servants shall he be to his brothers.’”[5]

According to Catholic mystic Anne Catherine Emmerich, "I saw the curse pronounced by Noah upon Ham moving toward the latter like a black cloud and obscuring him. His skin lost its whiteness, he grew darker. His sin was the sin of sacrilege, the sin of one who would forcibly enter the Ark of the Covenant. I saw a most corrupt race descend from Ham and sink deeper and deeper in darkness. I see that the black, idolatrous, stupid nations are the descendants of Ham. Their color is due, not to the rays of the sun, but to the dark source whence those degraded races sprang."

In the Middle Ages, European scholars of the Bible picked up on the Jewish Talmud idea of viewing the "sons of Ham" or Hamites as cursed, possibly "blackened" by their sins. Though early arguments to this effect were sporadic, they became increasingly common during the slave trade of the eighteenth and nineteenth centuries.[6] The justification of slavery itself through the sins of Ham was well suited to the ideological interests of the elite; with the emergence of the slave trade, its racialized version justified the exploitation of a ready supply of African labour. This interpretation of Scripture was never adopted by the African Coptic Churches.

The curse of Ham in the Latter-day Saint Movement (Mormon)

The first recorded indication of Joseph Smith's adoption of the doctrine of the curse of Ham is found in a parenthetical reference as early as 1831.[7]

After the death of Joseph Smith, Brigham Young, the church's second president, taught that people of African ancestry were under the curse of Ham. Young also taught that the day would come when the curse would be nullified through the saving powers of Jesus Christ.[8]

In addition, based on his interpretation of the Book of Abraham, Young also believed that as a result of this curse, modern people of African descent were banned from receiving the Priesthood (although they were allowed to join the Church). Young believed the curse remained in people with even a single black ancestor.

However, every President of the Church from Joseph Smith Jr. to Spencer W. Kimball stated that the day would come when the Priesthood would be available to all men. In 1978, after much prayer and fasting on the matter, President Spencer W. Kimball of the Church of Jesus Christ of Latter-day Saints received a revelation which officially extended the Priesthood to all worthy males.

The curse of Ham in Black Hebrew Israelite and Nuwaubian teachings

The Nuwaubians, and certain Black Hebrew Israelite sects such as Yahweh Ben Yahweh, reversed the typical racial slant of the curse of Ham. In their teaching the curse was leprosy, which in its extreme form whitened the skins of the Canaanites.[9] [10]

Prophets of Islam are generally considered by hadith to have kept Islamic law, even before Islam existed; the belief is that God's universal will guided them in the same way as Muhammad, and their habits simply were not accepted by others nor written down. As Islam discourages the consumption of alcohol, this means that the story could not have happened as described in the Torah, as Noah would never be drunk. Instead the story of Noah's nakedness is sometimes explained as the result of the wind blowing off his cloak. Nevertheless, the story of the curse is not part of Islamic scripture.

Early Islamic scholars debated whether or not there was a curse on Ham's descendants. Some accepted that there was, and some argued that it was visible in dark skin. According to David Goldenberg,

Just as in Jewish and Christian sources, so too in Islamic sources do we find that it was not Canaan who was cursed with slavery, but Ham instead of or in addition to Canaan. So, for example, Tabari (d. 923), quoting Ibn Isaq (d. 768), Masudi (tenth century) and Dimashqui (thirteenth century). Ham appears as the recipient of the curse so regularly that the only Arabic author Gerhard Rotter could find who specifically limits the curse to Canaan is Yaqubi (d. ca 900). In all others the descendants of Ham were enslaved.[11]

Goldenberg argues that the "exegetical tie between Ham and servitude is commonly found in works composed in the Near East whether in Arabic by Muslims or in Syraic by Christians."[12] He suggests that the compilation known as the Cave of Miracles (Abrégé des merveilles) may be the source. This text states that "Noah cursed Ham, praying to God that Ham's sons may be cursed and black and that they be subjected as slaves to those of Shem."

However, Ibn Khaldun disputed this story, pointing out that the Torah makes no reference to the curse being related to skin color and arguing that differences in human pigmentation are caused entirely by climate.[13] Ahmad Baba agreed with this view, rejecting any racial interpretation of the curse.

In the book, One Thousand and One Nights, there is an argument between black and white concubines about which color is better. The white concubine tells the story of the curse of Ham, saying that Ham was blackened because he ridiculed his father, but Shem was whitened because he refused to do so. The black concubine replies with the argument that whiteness is associated with death and leprosy.[14]