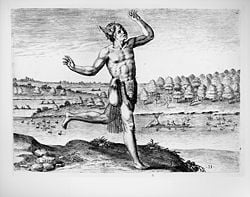 Native American "conjuror" in a 1590 engraving.

The word conjuration (from Latin conjuratio, conjurare, to swear together) can be interpreted in several different ways: As an invocation or evocation (the latter in the sense of binding by a vow); as an exorcism; or as an act of illusionism. The word is often used synonymously with "invocation," although the two are not synonyms. One who performs conjurations is called a conjurer or conjuror.

The verb conjure is used to refer to the use of magic or spells to affect or bring something into being. Conjuring can also refer to the invocation of a spirit or devil, a practice that is widespread in traditional cultures worldwide. As a noun, "conjure," is often used in the southern United States to refer to an act of folk magic performed by practitioners of hoodoo.

Sorcerers, magicians, and conjurers who use powers of the supernatural may be pursuing either a good or evil purpose. Often the ability of a conjuror to gain power over another human being invites abuse. Conjuring in this sense has nothing in common with entertainers who practice the art of illusion as a means of employment, putting on shows that delight their audiences. This article deals only with conjuration of the former type.

Conjuring spirits has been part of the spiritual side of many cultures throughout history, including Native American cultures like the Cherokee, as well as cultures in medieval Europe, shamanism in Asia, and West African influenced hoodoo (Hudu). The conjuring of spirits has also been a part of many Wiccan practices and rituals.

The text of the charms to be recited to conjure the spirit varies considerably from simple sentences to complex paragraphs with plenty of magic words. The language usually is that of the conjurer's, but since the Middle Ages in Western tradition, Latin was the most common (although many texts have been translated into other languages).

Spirits can be conjured either to aid and benefit a person or group or to harm an enemy. When it is said that a person is calling upon or conjuring misfortune or disease, it is due to the ancient belief that personified diseases and misfortune as evil deities, spirits or demons could enter a human or animal body; see demon possession. The conjuring of spirits is often associated with a certain amount of ritual, no matter what the culture.

Charms have often been used to summon spirits, as well as magic or sacred symbols marked on the floor/ground, an altar, or embroidered on the clothing of the conjurer. Amulets and protective purification rituals to cleanse the body, mind, and soul are often used to ward off any potential harm that could befall the conjurer. Some rituals consider the hour of the day or night and the astrological configuration of the zodiac important to the success of a ritual. Incense and specific herbs may be used, often used in conjunction with candlelight to create a certain atmosphere.

In addition to the conjuring of spirits, the conjuring of the dead has also been practiced. Necromancy, or the act of conjuring the dead for divination, dates back to ancient times. In the Middle Ages, necromancy was widely practiced by magicians, sorcerers, and witches, until it was condemned by the Catholic Church. Necromancy is still a part of Voodoo. Many consider necromancy to be a dark and repugnant practice.[1]

Christianity and Islam view conjuration, as well as other forms of magic, as an inherently evil practice, explicitly forbidden in Scripture. In societies that do not view magic as inherently evil, some people use conjuring and other forms of magic for evil purposes. Gaining control over others by magical means, they can destroy people or relationships for the purposes of revenge or selfish gain. Known as black magicians, such individuals are opposed by other traditional magicians who use conjuration to undo their evil spells.

Conjuration in the Middle East

Conjuration is a very common mystic practice in the Middle East, most commonly found in Morocco, Oman, Saudi Arabia, the United Arab Emirates, and Iraq. Many practice it to settle personal grudges or for healing, personal enhancement, or foretelling the future. There are also those who will sell their services as conjurers to others.

Islam strongly forbids the use of conjuration, because it is seen as an unholy procedure, and therefore to perform it is to give an insult to God. It is also considered to, in the end, harm people more than help them: Those who regularly contact demons are believed to go mad through overdosing on power, or being possessed (since demons are thought to be short-tempered beings, and given the opportunity might overpower and enslave the one who summoned them).

Conjuration is such a widespread phenomenon in these regions that special television shows and satellite channels have started broadcasting about it. People will phone in to these shows to ask the resident conjurers to aid them in some way—by showing them how to make charms, for example, or how to conjure by themselves. Though it is obvious that what is going on is conjuration, the conjurers tend to portray themselves as men of religion to add an air of respectability.

Islam has strongly forbidden this new development, with many imams stating that it is more dangerous than going to a conjurer to get service, because it teaches people how to conjure, and by the time the Dajjal (false messiah or antichrist) arrives at the end of days people will not be able to differentiate between him and Isa (Jesus), as the Dajjal would impose himself as Isa and trick those who are weak in belief.

Not to be confused with the Voodoo religion, hoodoo is the practice of folk magic, primarily by African-Americans in the southern states. Originating in the nineteenth century or before, hoodoo incorporates African folkloric practices/beliefs with Native American botanical knowledge and European folklore. Hoodoo is also known as "conjuration," "conjure," "witchcraft," "rootwork," and "tricking." Practitioners of hoodoo may be known as "conjure men/women." Contrary to what such a term implies, hoodoo practitioners use neither invocatory magic or sleight of hand illusions; the only connection of hoodoo to conjuring is the use of the word.[2]