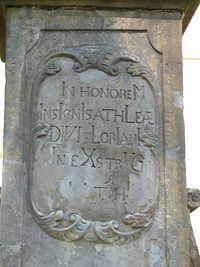 A chronogram is a sentence or inscription in which specific letters, interpreted as numerals, stand for a particular date when rearranged. The word, meaning "time writing," derives from the Greek words chronos ("time") and gramma ("letter"). In a pure chronogram each word contains a numeral, while a natural chronogram contains all numerals in the correct numerical order, e.g. AMORE MATVRITAS = MMVI = 2006. Chronograms in versification are referred to as chronosticha, if they are in hexameter, and chronodisticha if they are a distich.

Chronograms are found in diverse cultural traditions including Jewish, Islamic, and Roman traditions. 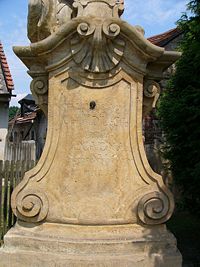 The practice of Roman chronograms originated in the late Roman Empire and was particularly popular during the Renaissance, when chronograms were often used on tombstones and foundation stones to mark the date of the event being commemorated. For instance:

Many lengthy examples of chronograms can be found in Germany, notably in and around the town of Bad Salzuflen. These commemorate the building of houses in the form of prayers or quotations from the Bible. For instance, SVRGE O IEHOVA ATQVE DISPERGE INIMICOS TVOS ("Rise, oh Jehovah, and destroy your enemies," a slightly altered version of Psalm 68:2) indicates the year 1625.

One double chronogram, in Latin and English, on the year 1642, reads, "'TV DeVs IaM propItIVs sIs regI regnoqVe hVIC VnIVerso." — "O goD noVV sheVV faVoVr to the kIng anD thIs VVhoLe LanD." The English sentence demonstrates that the origin of the letter w as a double v or u was recognized historically.

The great popularity of chronograms and the extent to which they have been used may be explained by the fact that they are a variety of Gematria, which was highly regarded in the Jewish tradition.

It is evident that for a period of five hundred years chronograms occurred in the epitaphs of European Jews. For example, the dates of the epitaphs of the family of Asher ben Jehiel in the first half of the fourteenth century are indicated by chronograms (Almanzi, "Abne Zikkaron," pp. 4, 6, 9); and among 68 Frankfort epitaphs of that century four chronograms have been preserved. In Germany, there are only about twenty-five (and these very simple) in a total of some 6,000 inscriptions. In Bohemia and Poland, chronograms in epitaphs occur more frequently and are often very clever. For example, the epitaph of the physician Menahem b. Asher Mazzerato, who died at Prague in 1680, reads as follows: איש צדיק ישר חכם וענו האלוף מהר״ר מנחם רופא מומחה (Lieben, "Gal 'Ed," p. 36); and the numerical value of the marked initial letters therein amounts to 440; i.e., 5440, the Jewish year in which Menahem died. The year of death of the associate rabbi of Prague, Zalman, who perished in the great fire of 1689 (=5449 Jewish era), is indicated by the words 'באש יצא מאת ד (ib. No. 59).

While epitaphs, in addition to chronograms, in many cases directly mention dates, many manuscripts, and an even greater number of printed books, are dated simply by means of chronograms; authors, copyists, and typographers rival one another in hiding the dates in intricate chronograms. Hence, much of Jewish bibliographic data requires deciphering. The custom of indicating dates by means of chronograms was so prevalent in Jewish literature that only a few books were dated by numerals only. In the earliest printed books chronograms consisted of one or two words only: the Soncino edition of the Talmud, for instance, has for its date the earliest printed chronogram, גמרא ("Gemara") = 244 (1484 C.E.). Words like רננו ("rejoice ye!"), שמחה ("joy"), ברנה ("with rejoicing") were especially used for this purpose, as they express happiness. Later on, entire verses of the Bible, or sentences from other books, having some reference to the contents or title of the book, or to the name of the author, publisher, printer, etc., were used. In longer sentences, in which some of the letters were not used in the chronogram, those that counted were marked by dots, lines, or different type, or were distinguished in other ways. Innumerable errors have been made by bibliographers because the distinguishing marks were missing or blotted, or had been omitted. In addition, the many ways of indicating the "thousand" of the Jewish calendar have added to the confusion. The Italian, Oriental, and earlier Amsterdam editions frequently designate the thousand as לפ״ג (‎= לפרט גדול, "the major era"). The German and Polish editions omit the thousand, considering only לפ״ק (‎= לפרט קטן, "the minor era"‬). The following chronogram, which Rabbi Samuel Schotten adds to his work "Kos ha-Yeshu'ot" (Sefer Kos ha-yeshuʻot: ṿe-hu ḥeleḳ rishon min ḥidushe Maharshshakh ʻal Seder ha-Yeshuʻot uve-khelalan shevaʻ masekhtot elu ṿa-hen : shalosh Bavot, Sanhedrin, Makot, Shevuʻot, ʻA.Z, 1711), shows how artificial and verbose chronograms may be: "Let him who wishes to know the year of the Creation pour the contents out of the cup [i.e., count the word "kos," כוס with defective spelling = 80] and seek aid [ישועה ‎= 391; together 471] in the sixth millennium." The days of the month and week are indicated in the same way.

Many important years in Jewish history are indicated by their respective chronograms; e.g., the year 1492 by מזרה ("scatterer" = 252, after Jer. xxi. 10, which says that God scattered Israel). This was the year when the Jews were expelled from Spain (Abravanel's Introduction to his Commentary on Kings).

Neo-Hebraic poetry, which particularly emphasized the formal aspects of verse, also used chronograms. A number of Hebrew poems were produced in the first half of the nineteenth century, in which the letters of each verse have the same numerical value, generally indicating the year in which it was written. A New-year's poem in this style, written in the year 579 (=1819), is found in Shalom Cohen's "Ketab Yosher" (Ketāb Yōsher, 1875, p. 146). Two years later Jacob Eichenbaum wrote a poem in honor of a friend, each line of which had the numerical value of 581 (̣Kol zimrah = Stimme des Gesangs: ḳevutsat shirim shonim, 1836, pp. 50–53). While this poem is really a work of art, in spite of the artifice employed, Eichenbaum's imitators have in their translations merely produced rimes with certain numerical values. Gottlober wrote an excellent satire on these rimesters, each line of his poem having the numerical value of 618 (=1858).

The Arabic numerals or Abjad numerals are a decimal numeral system in which the 28 letters of the Arabic alphabet are assigned numerical values. They have been used in the Arabic-speaking world since before the eighth-century Arabic numerals. In modern Arabic, the word ʾabjad means "alphabet" in general.

The word "abjad" (أبجد ʾabǧad) itself derives from the first four letters in the proto-Canaanite alphabet, Phoenician, Aramaic alphabet and Hebrew alphabet. These older alphabets contained only 22 letters, stopping at taw, numerically equivalent to 400. The Old Arabic alphabet, thought to be derived from Aramaic by way of the Nabateans, also followed this pattern: aleph, beth, gimel, and daleth. The Arabic Abjadi system continues at this point with letters not found in other alphabets: ṯāʼ = 500, etc.

The Abjadi order of the Arabic alphabet has two slightly different variants. The Abjadi order is not a simple historical continuation of the earlier north Semitic alphabetic order, since it has a position corresponding to the Aramaic letter samekh/semkat ס‎, yet no letter of the Arabic alphabet historically derives from that letter. Loss of samekh was compensated for by the split of shin ש‎ into two independent Arabic letters, ش (shīn) and ﺱ (sīn) which moved up to take the place of samekh.

The most common Abjadi sequence is:

This is commonly vocalized as follows:

Another Abjadi sequence (probably older, now mainly confined to the Maghreb), is:

which can be vocalized as:

Modern dictionaries and other reference books do not use the abjad order to sort alphabetically; instead, the newer hijāʼī (هجائي) order (with letters partially grouped together by similarity of shape) is used:

Uses of the Abjad system

Before the introduction of the Hindu-Arabic numerals, the Abjad numbers were used for all mathematical purposes. In modern Arabic, they are primarily used for numbering outlines, items in lists, and points of information. In English, points of information are sometimes referred to as "A," "B," and "C," and in Arabic, they are "أ‎," then "ب‎," then "ج‎," not the first three letters of the modern hijāʼī order.

A few of the numerical values are different in the alternative abjad order.

The Hebrew numerals are equivalent to the Abjadi numerals up to 400. This system is known as Gematria and is used in Kabalistic texts and numerology. Like the Abjad order, it is used in modern times for numbering outlines and points of information, including the first six days of the week. The Greek numerals differ from the Abjadi ones from 90 upwards because in the Greek alphabet there is no equivalent for ṣād (ص). The Greek language system of letters-as-numbers is called isopsephy.

Retrieved from https://www.newworldencyclopedia.org/p/index.php?title=Chronogram&oldid=1003377
Categories:
This page was last edited on 21 February 2017, at 16:05.
Content is available under Creative Commons Attribution/Share-Alike License; additional terms may apply. See Terms of Use for details.