Chevrotain and mouse deer are common names for any of the small ruminant mammals comprising the family Tragulidae of the suborder Ruminantia and order Artiodactyla (even-toed ungulates). The smallest of the hoofed mammals (standing about a foot high at shoulder), they are characterized by slender legs, delicately built hoofs, a tapered snout, three fully developed stomach chambers (the fourth, the omasum, is poorly developed), and a primarily solitary, herbivorous, nocturnal behavior; they lack antlers and horns, but males have small, curved, downward protruding, tusklike upper canine teeth. Chevrotains are found in parts of southeastern Asia and Africa.

Although one of the common names is mouse deer, they are not true deer in that they do not belong to the Cervidae family.

The almost exclusively herbivorous tragulids provide an important role in food chains, with their small size making them an important prey for such carnivores as snakes,crocodiles, felines, and birds of prey such as eagles.

As even-toed ungulates (order Artiodactyla), tragulids (chevrotains or mouse deer) are characterized by a double-pulley astragalus (a bone in the ankle joint) and an even number of functional toes (four), with the main limb axis passing between the middle two digits. As ruminants, tragulids digest their food in two steps, first by eating the raw material and regurgitating a semi-digested form known as cud, then by eating the cud, a process called ruminating. They have a four-chambered stomach to ferment tough plant foods, but the third chamber is poorly developed.

There are 10 living (extant) species in three genera (Wilson and Reeder 2005; Groves and Meijaard 2005). The extant species are found in forests in South and Southeast Asia, with a single species in the rainforests of Central and West Africa (Nowak 1999).

Tragulids are small ungulates. Depending on exact species, the Asian species weigh between 0.7 and 8.0 kilograms (1.5 and 18 lb), and the smallest species are also the smallest ungulates in the world (Nowak 1999). The African chevrotain (Hyemoschus aquaticus) is considerably larger at 7–16 kilograms (15–35 lb) (Huffman 2011). Members of the family have legs that are short and thin, which leave them lacking in agility, but also helps to maintain a smaller profile to aid in running through the dense foliage of their environment. The slender limbs end in hoofs. They have four toes on each foot and tragulids sometimes are digitigrade (stands or walks on its digits, or toes). They lack foot scent glands.

All species in the family lack horns, but both genders have elongated canine teeth. These are especially prominent in males where they are large and curved, project out on either side of the lower jaw, and are used in fights (Nowak 1999). They lack upper incisors but have lower incisors. They have premolars with sharp crowns, and lack facial scent glands.

The word "chevrotain" is French, and can be translated as "little goat." The single African species is consistently known as chevrotain (Wilson and Reeder 2005; Nowak 1999; IUCN 2008). The names chevrotain and mouse deer have been used interchangeably among the Asian species (Nowak 1999; Duckworth et al. 2008; Duckworth and Timmons 2008a, 2008b), though recent authorities typically have preferred chevrotain for the species in the genus Moschiola and mouse-deer for the species in the genus Tragulus (Wilson and Reeder 2005). Consequently, all species with pale-spotted or -striped upperparts are known as chevrotains, and all the species without are known as mouse deer or mouse-deer. 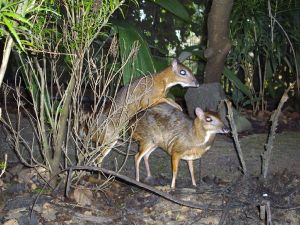 Tragulids are solitary or live in pairs (Nowak 1999). Though most species feed exclusively on plant material, the water chevrotain occasionally takes insects and crabs, or scavenge meat and fish (Kingdon 1997).

Some of the species show a remarkable affinity with water, often remaining submerged for prolonged periods to evade predators or other unwelcome intrusion. This has also lent support to the idea that whales evolved from water-loving creatures that looked like small deer (Walker 2009).

The Tragulidae family was widespread and successful from the Oligocene (34 million years ago) through the Miocene (about 5 million years ago), and they retain a number of primitive traits that appears to have remained almost unchanged from that time.

Traditionally, only four extant species were recognized in the family Tragulidae (Nowak 1999). In 2004, T. nigricans and T. versicolor were split from T. napu, and T. kanchil and T. williamsoni were split from T. javanicus (Meijaard and Groves 2004). In 2005, M. indica and M. kathygre were split from M. meminna (Groves and Meijaard 2005). With these changes, there are 10 extant species. There also are several species only known from fossils (Farooq et al. 2008). 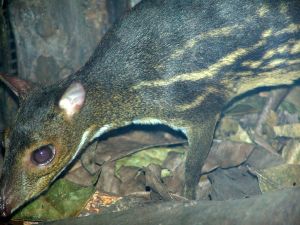 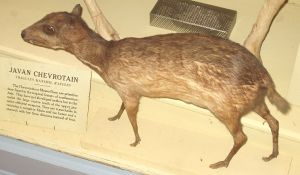 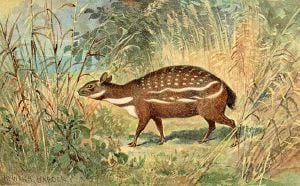 There are 6 extinct chevrotain genera (Farooq et al. 2008), including:

The Hypertragulidae were closely related to the Tragulidae.

Retrieved from https://www.newworldencyclopedia.org/p/index.php?title=Chevrotain&oldid=986095
Categories:
Hidden category:
This page was last edited on 29 December 2014, at 17:29.
Content is available under Creative Commons Attribution/Share-Alike License; additional terms may apply. See Terms of Use for details.