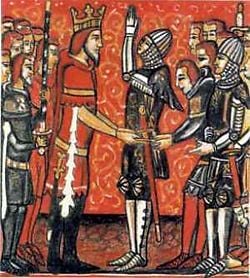 Roland pledges his fealty to Charlemagne; from a manuscript of a chanson de geste.

The chansons de geste, Old French for "songs of heroic deeds," are the epic poetry that appears at the dawn of French literature. The earliest known examples date from the late eleventh and early twelfth centuries, nearly a hundred years before the emergence of the lyric poetry of the trouvères and the earliest verse romances.

These songs originated in the (largely pagan) oral tradition that preceded written culture, and show influence of both the pagan tradition as well as the emerging influence of Christian ideas and values.

Composed in Old French, apparently intended for oral performance by jongleurs, the chansons de geste narrate legendary incidents (sometimes based on real events) in the history of France in the eighth and ninth centuries, the age of Charles Martel, Charlemagne and Louis the Pious, with emphasis on their combats against the Moors and Saracens. To these historical legends fantasy is gradually added; giants, magic, and monsters increasingly appear among the foes along with Muslims. There is also an increasing dose of Eastern adventure, drawing on contemporary experiences in the Crusades; in addition, one series of chansons retells the events of the First Crusade and the first years of the Kingdom of Jerusalem. Finally, in chansons of the thirteenth and fourteenth centuries, the historical and military aspects wane, and the fantastic elements in the stories dominate.

The traditional subject matter of the chansons de geste became known as the "Matter of France." This distinguished them from romances concerned with the "Matter of Britain," (matière de Bretagne) that is, King Arthur and his knights; and with the so-called "Matter of Rome," covering the Trojan War, the conquests of Alexander the Great, the life of Julius Cæsar and some of his Imperial successors, who were given medieval makeovers as exemplars of chivalry.[1]

The poems contain a small and unvarying assortment of character types; the repertoire of valiant hero, brave traitor, shifty or cowardly traitor, Saracen giant, beautiful Saracen princess, and so forth is one that is easily exhausted. As the genre matured, fantasy elements were introduced. Some of the characters that were devised by the poets in this manner include the fairy Oberon, who made his literary debut in Huon de Bordeaux; and the magic horse Bayard, who first appears in Renaud de Montauban. Quite soon an element of self-parody appears; even the august Charlemagne was not above gentle mockery in the Pèlerinage de Charlemagne.

The origin of the chanson de geste as a form is much debated. The nineteenth century medievalist Gaston Paris, recognizing that they drew on an oral epic tradition, identified this with narrative songs (sometimes called cantilenae) that are occasionally mentioned by contemporary authors in other genres.

Such songs about important events were sometimes being sung very soon after the military events described. As a first example, a contemporary historian records that the names of those who fell at the very minor ambush at Roncesvalles were on everyone's lips sixty years after the event, indicating the growth of a legend quite out of proportion to the political significance of the original incident–a legend that would result, long afterwards, in the various versions of The Song of Roland that are still extant.[2] As a second example, there are references to contemporary songs on the subject of the First Crusade in two historical sources on that Crusade,[3] supporting the statement by Graindor of Brie, composer of the surviving Chanson d'Antioche, that he had drawn on the original work of the jongleur and participant Richard le Pèlerin. The Spanish Cantar de Mio Cid shows that a comparable narrative tradition existed in Spain at the same period.

Gaston Paris also believed that the early singers followed the courts of kings and military leaders, as did Norse skalds (lyric poets) and some Celtic bards, but the evidence on this is less conclusive.

Another school of thought, championed by Joseph Bédier, holds that the poems were the invention of the poets who wrote them. Bédier further suggests that some of the stories were first invented by monks, who used them to advertise pilgrimage sites by connecting them not only with saints but also by legendary heroes of folklore. Magical relics frequently appear in the tales. This point of view has fewer proponents since the development of Oral theory; it is additionally problematic because monks were specifically forbidden to dabble in the literature of the jongleurs.

Early chansons de geste are composed in ten-syllable lines grouped in assonanced stanzas (meaning that the last stressed vowel is the same in each line throughout the stanza, but the last consonant differs from line to line). Stanzas are of variable length. An example from the Chanson de Roland illustrates the technique. The assonance in this stanza is on e:

Under a pine tree, by a rosebush,
there is a throne made entirely of gold.
There sits the king who rules sweet France;
his beard is white, with a full head of hair.
He is noble in carriage, and proud of bearing.
If anyone is looking for the King, he doesn't need to be pointed out.

Later chansons are composed in monorhyme stanzas, in which the last syllable of each line rhymes fully throughout the stanza. A second change is that each line now contains twelve syllables instead of ten. The following example is from the opening lines of Les Chétifs, a chanson in the Crusade cycle. The rhyme is on ie:

So Corbaran escaped across the plains of Syria;
He took only two kings in his company.
He carried away Brohadas, son of the Sultan of Persia,
Who had been killed in the battle by the clean sword
Of the brave-spirited good duke Godfrey
Right in front of Antioch, down in the meadow.

The songs were recited (sometimes to casual audiences, sometimes possibly in a more formal setting) by jongleurs, who would sometimes accompany themselves, or be accompanied, on the vielle, a mediæval fiddle played with a bow. Several manuscript texts include lines in which the jongleur demands attention, threatens to stop singing, promises to continue the next day, and asks for money or gifts. Since paper was extremely expensive and not all poets could read, it seems likely that even after the chansons had begun to be written down, many performances continued to depend on oral transmission. As an indication of the role played by orality in the tradition of the chanson de geste, lines and sometimes whole stanzas (especially in the earlier examples) are noticeably formulaic in nature, making it possible both for the poet to construct a poem in performance and for the audience to grasp a new theme with ease.

Approximately one hundred chansons de geste survive, in manuscripts that date from the twelfth century to the fifteenth century. Several popular chansons were written down more than once in varying forms. The earliest chansons are all (more or less) anonymous; many later ones have named authors.

About 1215 Bertrand de Bar-sur-Aube, in the introductory lines to his Girart de Vienne, subdivided the Matter of France, the usual subject area of the chansons de geste, into three cycles, which revolved around three main characters. There are several other less formal lists of chansons, or of the legends they incorporate. One can be found in the fabliau entitled Des Deux Bordeors Ribauz, a humorous tale of the second half of the thirteenth century, in which a jongleur lists the stories he knows.[4] Another is included by the Catalan troubadour Guiraut de Cabrera in his humorous poem Ensenhamen, better known from its first words as "Cabra juglar": this is addressed to a juglar (jongleur) and purports to instruct him on the poems he ought to know but doesn't.[5]

The listing below is arranged according to Bertrand de Bar-sur-Aube's cycles, extended with two additional groupings and with a final list of chansons that fit into no cycle. There are numerous differences of opinion about the categorization of individual chansons.

The chief character is usually Charlemagne or one of his immediate successors. A pervasive theme is the King's role as champion of Christianity. This cycle contains the first of the chansons to be written down, the Chanson de Roland or "The Song of Roland."

The central character is not Garin de Monglane but his supposed great-grandson, Guillaume d'Orange. These chansons deal with knights who were typically younger sons, not heirs, who seek land and glory through combat with the Infidel (in practice, Muslim) enemy.

This cycle concerns traitors and rebels against royal authority. In each case the revolt ends with the defeat of the rebels and their eventual repentance.

This local cycle of epics of Lorraine traditional history, in the late form in which it is now known, includes details evidently drawn from Huon de Bordeaux and Ogier le Danois.

Not listed by Bertrand de Bar-sur-Aube, this cycle deals with the First Crusade and its immediate aftermath.

The chansons de geste created a body of mythology that lived on well after the creative force of the genre itself was spent. The Italian epics of Torquato Tasso (Rinaldo), Orlando innamorato (1495) by Matteo Boiardo, and Orlando furioso by Ludovico Ariosto are all founded on the legends of the paladins of Charlemagne that first appeared in the chansons de geste. As such, their incidents and plot devices later became central to works of English literature such as Edmund Spenser's The Faerie Queene; Spenser attempted to adapt the form devised to tell the tale of the triumph of Christianity over Islam to relate instead the triumph of Protestantism over Roman Catholicism. The German poet Wolfram von Eschenbach based his (incomplete) thirteenth century epic Willehalm, consisting of 78 manuscripts, on the life of William of Orange. The chansons were also recorded in the Icelandic saga, Karlamagnús.

Indeed, until the nineteenth century, the tales of Roland and Charlemagne were as important as the tales of King Arthur and the Holy Grail, and the Italian epics on these themes were still accounted major works of literature. It is only in the later nineteenth and twentieth century that the Matter of France was finally eclipsed by the Matter of Britain.

Retrieved from https://www.newworldencyclopedia.org/p/index.php?title=Chanson_de_geste&oldid=1002924
Categories:
Hidden category:
This page was last edited on 25 January 2017, at 21:52.
Content is available under Creative Commons Attribution/Share-Alike License; additional terms may apply. See Terms of Use for details.