Brazil nut is the common name for a large, South American tree, Bertholletia excelsa, in the family Lecythidaceae, characterized by a large, hard, woody, spherical coconut-like seed pod, or fruit, containing a number of dark brown, triangular (three-sided) seeds with a extremely hard shell, known as "nuts," each with a whitish kernel inside. The term brazil nut also is used for the edible seed, which is of commercially importance.

Ecologically, the reproduction of brazil nut trees reflects a harmonious coordination on two levels. On the one level, the pollination of the flowers is dependent on particular large-bodied bees that can negotiate the unique form of the flowers. Orchid bees not only pollinate the flowers, but themselves are dependent on the flowers for their own reproduction, with the scent of the flowers able to attract females for mating with the males. On another level, seed dispersal of the hard shelled nuts depends on large rodents, such as the agouti, which are able to gnaw it open to gain the nourishment of the kernel while also burying caches of the seeds.

Of course, the reproduction of the brazil nut tree also benefits human beings, as the nuts are popular and traded worldwide for culinary use. The dependence on the largely solitary or semi-social pollinating bees has meant most brazil trees are harvested in the wild, not on plantations. 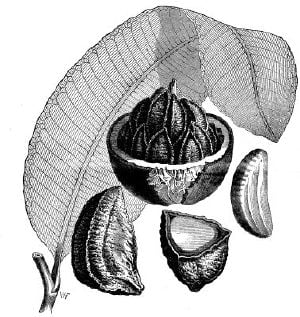 The brazil nut tree is the only species in the monotypic genus Bertholletia. The Lecythidaceae family to which it belongs contains about 20 genera and 250 to 300 species of woody plants native to tropical South America and Madagascar. The Brazil nut, Bertholletia excelsa, is native to Brazil, eastern Bolivia, the Guianas, Venezuela, eastern Colombia, and eastern Peru. It occurs as scattered trees in large forests on the banks of the Amazon, Rio Negro, and the Orinoco. The genus is named after the French chemist Claude Louis Berthollet.

The brazil nut is a large tree, reaching 30 to 45 meters (100 to 150 feet) tall and 1 to 2 meters (3–6.5 feet) in trunk diameter, among the largest of trees in the Amazon Rainforest. The stem is straight and commonly unbranched for well over half the tree's height, with a large emergent crown of long branches above the surrounding canopy of other trees. The bark is grayish and smooth. The stem may live for 500 years or more, and according to some authorities often reaches an age of 1000 years (Taitson 2007).

The leaves are dry-season deciduous, alternate, simple, entire or crenate, oblong, 20 to 35 centimeters (8-14 inches) long and 10 to 15 centimeters (4-6 inches) broad. The flowers are small, greenish-white, in panicles 5 to 10 centimeters (2-4 inches) long; each flower has a two-parted, deciduous calyx, six unequal cream-colored petals, and numerous stamens united into a broad, hood-shaped mass.

Brazil nut trees produce fruit almost exclusively in pristine forests, as disturbed forests lack the large-body bees that are the only ones capable of pollinating the tree's flowers (Nelson et al. 1985; Moritz 1984). Brazil nuts have been harvested from plantations but production is low and it is currently not economically viable (Hennessey 2001; Kirchgessner). 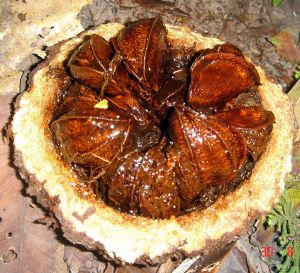 The brazil nut tree's yellow flowers contain very sweet nectar and can only be pollinated by an insect strong enough to lift the coiled hood on the flower and with tongues long enough to negotiate the complex coiled flower. Notably, the flowers produce a scent that attracts large-bodied, long-tongued euglossine bees, or orchid bees. Small male orchid bees are attracted to the flowers, as the male bees need that scent to attract females. But it is largely the large female long-tongued orchid bee that actually pollinates the Brazil nut tree (Hennessey 2001). Without the flowers, the bees do not mate, and the lack of bees means the fruit does not get pollinated.

Among species of large-bodied bees, orchid bees or not, observed to visit the flowers are those of the genera Eulaema, Bombus, Centris, Epicharis, and Xylocopa (Kirchgessner).

If both the orchids and the bees are present, the fruit takes 14 months to mature after pollination of the flowers. The fruit itself is a large capsule 10 to 15 centimeters diameter resembling a coconut endocarp in size and weighing up to 2 to 3 kilograms. It has a hard, woody shell 8 to 12 millimeter thick. Inside this hard, round, seedpod, are 8 to 24 triangular (three-sided) seeds about 4 to 5 centimeters (1.5-2 inches) long (the "Brazil nuts") packed like the segments of an orange; it is not a true nut in the botanical sense, but only in the culinary sense.

The capsule contains a small hole at one end, which enables large rodents like the agouti to gnaw it open. They then eat some of the nuts inside while burying others for later use; some of these are able to germinate to produce new Brazil nut trees. The agouti may carry a seed over 400 meters from the parent tree (Hennessey 2001). Most of the seeds are "planted" by the agoutis in shady places, and the young saplings may have to wait years, in a state of dormancy, for a tree to fall and sunlight to reach it. It is not until then that it starts growing again. Capuchin monkeys have been reported to open Brazil nuts using a stone as an anvil. 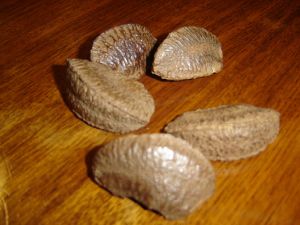 Despite their name, the most significant exporter of brazil nuts is not Brazil but Bolivia, where they are called almendras. In Brazil these nuts are called castanhas-do-Pará (literally "chestnuts from Pará"), but Acreans call them castanhas-do-Acre instead. Indigenous names include juvia in the Orinoco area, and sapucaia in the rest of Brazil.

Cream nuts is one of the several historical names used for Brazil nuts in America. 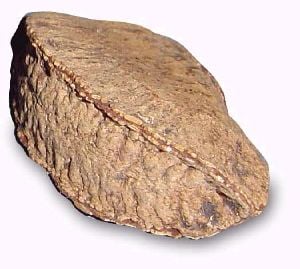 Brazil nuts for international trade come entirely from wild collection rather than from plantations. This has been advanced as a model for generating income from a tropical forest without destroying it. The nuts largely are gathered by migrant workers.

Analysis of tree ages in areas that are harvested show that moderate and intense gathering takes so many seeds that not enough are left to replace older trees as they die. Sites with light gathering activities had many young trees, while sites with intense gathering practices had hardly any young trees (Silvertown 2004). Statistical tests were done to determine what environmental factors could be contributing to the lack of younger trees. The most consistent effect was found to be the level of gathering activity at a particular site. A computer model predicting the size of trees where people picked all the nuts matched the tree size data that was gathered from physical sites that had heavy harvesting. Culinary use and nutrition

Brazil nuts are eaten as they are or as part of confectionary or baked goods. They are one of the world's major commercial nuts. The "Brazil nut effect" describes the tendency of the larger items to rise to the top of a mixture of items of various sizes but similar densities, such as brazil nuts mixed with peanuts.

Brazil nuts are about 18 percent protein, 13 percent carbohydrates, and 69 percent fat. The fat breakdown is roughly 25 percent saturated, 41 percent monounsaturated, and 34 percent polyunsaturated (USDA 2008). The saturated fat content of Brazil nuts is among the highest of all nuts.

Nutritionally, Brazil nuts are perhaps the richest dietary source of selenium, containing as much as 1180 percent of the USDA (U.S. Recommended Dietary Allowances), although the amount of selenium within batches of nuts varies greatly (Chang et al. 1995). Recent research suggests that proper selenium intake is correlated with a reduced risk of both breast cancer as well as prostate cancer (Klein et al. 2001). As a result, brazil nuts are sometimes recommended as a protective measure (Moss 2001). These findings correlating selenium and reduced risk of various cancers are inconclusive, however; other investigations into the effects of selenium on prostate cancer failed to exhibit such a correlation (Peters et al. 2007).

Brazil nuts also are a rich source of vitamin B1 and vitamin E, a good source of niacin and calcium, and a source of iron (Bender and Bender 2005).

Despite the possible health benefits of the nut, in 2003 the European Union imposed strict regulations on the import from Brazil of Brazil nuts in their shells, as the shells have been found to contain high levels of aflatoxins, which can lead to liver cancer, and Brazil lacked sufficient control mechanisms to prevent aflatoxin contamination (CEC 2003).

Brazil nuts also contain small amounts of radioactive radium. Although the amount of radium is very small, about 1–7 pCi/g (40–260 Bq/kg), and most of it is not retained by the body, this is 1000 times higher than in other foods. According to Oak Ridge Associated Universities, this is not because of elevated levels of radium in the soil, but due to "the very extensive root system of the tree" (Oak Ridge 2007).

The timber from Brazil nut trees (not to be confused with brazilwood) is of excellent quality, but logging the trees is prohibited by law in all three producing countries (Brazil, Bolivia, and Peru). Illegal extraction of timber and land clearances present a continuing threat (Greenpeace 2007).