The Battle of Mohács (Hungarian: mohácsi csata or mohácsi vész/Bane of Mohács; German: Schlacht bei Mohács; Croatian: Mohačka bitka; Serbian: Мохачка битка/Mohačka bitka; Slovak: Bitka pri Moháči; Turkish: Mohaç Savaşı or Mohaç Meydan Savaşı) was a battle fought on August 29, 1526, near Mohács, Hungary. In the battle, forces of the Kingdom of Hungary led by King Louis II were defeated by forces of the Ottoman Empire led by Sultan Suleiman the Magnificent. The Ottoman victory led to the partition of Hungary for several decades between the Ottoman Empire, the Habsurgs of Austria, and the Principality of Transylvania. The death of Louis II as he fled the battle marked the end of the Jagiellon dynasty, whose dynastic claims were absorbed by the Habsburgs via the marriage of Louis's sister.

While Mohács was a decisive loss, it was its aftermath that truly put an end to independent Hungary. The ensuing two hundred years of near constant warfare between the two empires, Habsburg and Ottoman, would devastate the Hungarian countryside and decimate the population. This episode is one of a series of confrontations between what was then conceived of as Christendom and the Muslim world. Conflict having ended in Andalusia following the completion of the Reconquista in 1492, this now erupted in the East. Ironically, some of the Jews who fled from Spain found refuge within what became the Ottoman space in the Balkans and in Hungary. Religious rivalry did play a role in these conflicts; Ottoman territorial expansion was seen as compensating the Muslim world for losses elsewhere, and as extending the rule of God's law. On the other hand, what was involved here was also competition between imperial powers, so conflict cannot be explained only in terms of religious animosity.

The Hungarians had long opposed Ottoman expansion in southeastern Europe, but the fall of Belgrade, and Szabács in 1521 meant that most of southern Hungary was left indefensible. As a counter to growing Ottoman power, Louis II, King of Hungary and Bohemia, entered into marriage with Mary of Habsburg in 1522, hoping to gain the aid of Habsburg Austria in the looming war with the Ottomans. The Ottomans saw the growing alliance as a threat to their power in the Balkans and planned to break this alliance.

After Suleiman I came to power the High Porte made the Hungarians at least one and possibly two offers of peace. It is unclear why Louis refused the peace offer from the Ottomans. It is possible that King Louis was well aware on Hungary's external policy (especially after the Battle of Chaldiran and Polish-Ottoman peace from 1525) and he realized that war was a better option than peace. Even in peacetime the Ottomans raided Hungarian lands and conquered huge territories (with border castles) but a final battle still offered a glimmer of hope. To such ends in June 1526, an Ottoman expedition advanced up the Danube River to attack.

The loss of Belgrade in 1521 caused great alarm in Hungary, but the too late and too slowly recruited 60,000 strong royal army—led by the King—disbanded spontaneously under the pressure of hunger and disease without even trying to recapture Belgrade “the key of Hungary” from the newly installed Turkish garrisons.

In 1523 Archbishop Pál Tomori, a valiant priest-soldier, was made Captain of Southern Hungary. The general apathy that had characterized the country forced him to lean on his own bishopric revenues when he started to repair and reinforce the second line of Hungary’s border defense system.

Five years later, a huge Ottoman army set out from Constantinople on April 16, 1526, led by Suleiman the Magnificent personally. The Hungarian nobles, who still did not realize the huge dimensions of the approaching danger, were not heeding their King's call to colors. Louis II ordered them to encamp on July 2, but no one reported on that day—not even the King! Only when Louis himself furnished an example with his appearance in the camp did things start to move.

The Hungarian war council—without waiting the reinforcements only few days march away—made a serious tactical error by choosing the battlefield near Mohacs, an open but uneven plain with some swampy marshes.

The Hungarian army was divided into three main units: the Transylvanian army under John Zápolya, charged with guarding the passes in the Transylvanian Alps, with between 8,000 and 13,000 men; the main army, led by Louis himself (beside numerous Spanish, German and Czech mercenaries, as well as Serbs); and another smaller force, commanded by the Croatian count Christopher Frankopan, numbering around 5,000 men. Due to geography, the Turkish army's ultimate goal could not be determined until it was crossing the Balkan Mountains. Unfortunately for the Hungarians, by the time the Ottoman army had crossed, the Transylvanian army was further from Buda than the Ottomans were. Contemporary historical records, though sparse, indicate that Louis preferred a plan of retreat, in effect ceding the country to Ottoman advances, rather than directly engaging the Ottoman army in open battle.

The Hungarian forces chose the battlefield, an open but uneven plain with some swampy marshes near Mohács leading down to the Danube. The Ottomans had been allowed to advance almost unopposed. While Louis waited in Buda, they had besieged several towns and crossed the Sava and Drava Rivers. Louis assembled around 25,000 to 28,000 soldiers while the Ottoman army numbered around 50,000 to 65,000.[1][2][5] The Hungarian army was arrayed to take advantage of the terrain and hoped to engage the Ottoman army piecemeal. 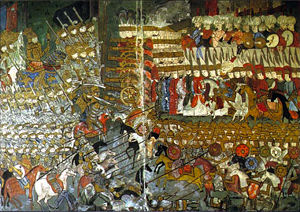 The battle of Mohács, on an Ottoman miniature.

Hungary had an expensive but obsolete structured army (Similar to King Francis I at the battle of Pavia). As with the uncertainty over the number of actual combatants, there is debate over the length of the battle. Its starting time is generally placed between 1:00 PM and 2:00 PM, but the endpoint is difficult to ascertain. While some historians have placed the length of the battle at two to three hours, this seems unlikely given several important factors. The Ottoman army did not retreat from the field and enter camp after the battle; instead, the Ottomans remained on the field all night without food, water, or shelter. Given that the Ottoman historians all note that it was raining, it seems likely that had the battle been short and ended early in the afternoon, by 5:00 PM at the latest, the Sultan would have ordered his army to camp or at least to return to their baggage. The few reliable sources indicate that Louis left the field at twilight and made his escape under cover of darkness; since the sun would not have set until 6:30 PM on August 29, 1526, this would imply that the battle lasted significantly longer than two to three hours (perhaps as long as four or five).

As the first of Suleiman's troops, the Rumelian army, advanced onto the battlefield, they were attacked and routed by Hungarian troops led by Pál Tomori. This attack by the Hungarian right was successful in causing considerable chaos among the Ottoman ranks, but even as the Hungarian attack pressed forward, the Ottomans rallied with the arrival of more Ottoman forces. While the Hungarian right advanced far enough at one time to place Suleiman in danger from Hungarian arrows that struck his cuirass, the superiority of the Ottoman numbers and the timely charge of the Janissaries, the elite troops of the Ottomans, probably overwhelmed the attackers, particularly on the Hungarian left. The Hungarians took many casualties from the skillfully handled Turkish artillery. The Hungarians could not hold their positions, and those who did not flee were surrounded and killed or captured. The king left the battlefield sometime around twilight but was thrown from his horse in a river at Csele and died, weighed down by his armor. Some 1,000 other Hungarian nobles and leaders were also killed. It is generally accepted that more than 14,000 Hungarian soldiers were killed in the initial battle.[3][4]

In the aftermath, Suleiman gave orders to keep no prisoners. Next day he wrote in his diary: "The Sultan, seated on a golden throne, receives the homage of the viziers and the beys, massacre of 2,000 prisoners, the rain falls in torrents." Reportedly among those 2,000 were several notable Hungarian leaders.

The victory did not give the Ottomans the security they wanted. Though they entered Buda and pillaged the castle and surroundings, they retreated soon afterwards. It was not until 1541 that the Ottomans finally captured and occupied Buda (see main article). However, to all intents and purposes, the Battle of Mohács meant the end of the independent Kingdom of Hungary as a unified territory. The Ottoman occupation was contested by the Habsburg Archduke of Austria, Ferdinand I, Louis's brother-in-law and successor by treaty with King Vladislaus II. Bohemia fell to Austria, who dominated the western third of Hungary and portions of today's Croatia (Royal Hungary), while the Ottomans held central Hungary and suzerainty over semi-independent Transylvania, and northern Hungary remained independent until the late 1500s. The subsequent near constant warfare required a sustained commitment of Ottoman forces, proving a drain on resources that the relatively poor kingdom of Hungary proved unable to repay. Christian armies besieged Buda several times during the 1500s, and Suleiman himself died of natural causes during the Battle of Szigetvár in 1566; there were also two unsuccessful Ottoman sieges of Eger, which did not fall until 1596, finally ending independent Hungarian resistance. 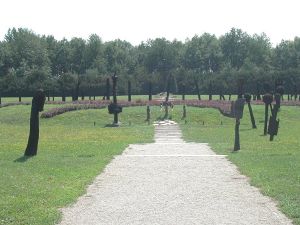 Mohács is seen by many Hungarians as the decisive downward turning point in the country's history, a national trauma persisting in the folk memory. For moments of bad luck, they have a saying: "more was lost at Mohács" (Több is veszett Mohácsnál). To this day, Hungarians view Mohács as marking the end of an independent and once powerful European nation. While Mohács was a decisive loss, it was its aftermath that truly put an end to independent Hungary. The ensuing two hundred years of near constant warfare between the two empires, Habsburg and Ottoman, would devastate the Hungarian countryside and decimate the population.

The battlefield became an official national historical memorial site in 1976 on the 450th anniversary of the battle. The memorial was designed by architect György Vadász.[6]