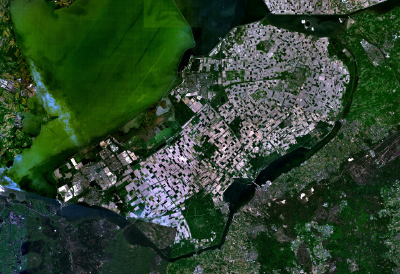 The Flevopolder in The Netherlands is the largest artificial island in the world.

An artificial island is an island that has been constructed by humans rather than formed by natural processes. Such islands have been created by expanding existing islets, construction on existing reefs, or amalgamating several natural islets into a bigger island. Thus, they vary widely in size, from small islets reclaimed solely to support a single pillar, building, or other structure, to those that support entire communities.

Early artificial islands included floating structures in still waters and wooden or megalithic structures erected in shallow waters (such as the crannógs and Nan Madol discussed below). In modern times, artificial islands have usually been formed by land reclamation, but some have been formed by the incidental isolation of an existing piece of land during canal construction (as in the case of Donauinsel and Dithmarschen), or by the flooding of valleys resulting in the tops of former knolls getting isolated by water (such as Barro Colorado Island). Some recent developments have been made more in the form of oil platforms, but there is disagreement whether they should be known as islands. The Palm Jumeirah is one of three islands known as the Palm Islands in Dubai.

Artificial islands have been constructed for various purposes. In the past, some were built for ceremonial structures, and others were intended to isolate one group of people from another. More recently, they have been built to ease overcrowding in urban areas, accommodate airports, and promote tourism. In addition, there are proposals to build islands to mitigate coastal erosion or generate electric power from renewable energy sources. Critics, however, note that each project is extremely expensive and could potentially harm ecosystems. 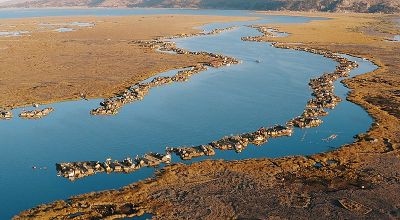 The Uros Floating Islands in Lake Titicaca near Puno, Peru

Despite a popular image of modernity, artificial islands have a long history in many parts of the world. They date back to the crannogs of prehistoric Scotland and Ireland, the ceremonial centers of Nan Madol in Micronesia, and the still extant floating islands of Lake Titicaca. The city of Tenochtitlan, the Aztec predecessor of Mexico City that was home to 250,000 people when the Spaniards arrived, stood on a small natural island in Lake Texcoco that was surrounded by countless artificial chinamitl islands.

Many artificial islands have been built in urban harbors to provide either a site deliberately isolated from the city or just spare real estate otherwise unobtainable in a crowded metropolis. An example of the first case is Dejima (or Deshima), built in the bay of Nagasaki during Japan's Edo period, as a contained center for European merchants. During the isolationist era, Dutch people were generally banned from Nagasaki and the Japanese from Dejima.

Some projects in the United States 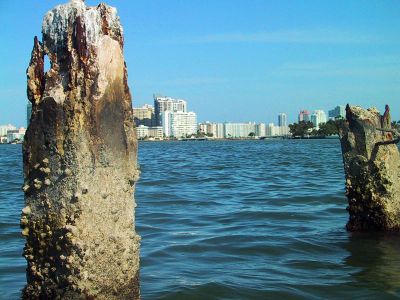 Ellis Island, in Upper New York Bay beside New York City, was a former tiny islet that was greatly expanded by land reclamation. It served as an isolated immigration center for the United States in the late nineteenth and early twentieth centuries, preventing an escape to the city of those refused entry for disease or other perceived flaw, who might otherwise be tempted to immigrate illegally. One of the better-known artificial islands is the Île Notre-Dame in Montreal, built for Expo 67.

The Venetian Islands in Miami Beach, Florida, in Biscayne Bay, added valuable new real estate during the Florida land boom of the 1920s. When the bubble the developers were riding burst, the bay was left scarred with the remnants of their failed project. A boom town development company was building a sea wall for an island that was to be called Isola di Lolando, but it could not stay in business after the 1926 Miami Hurricane and the Great Depression, dooming the island-building project. The concrete pilings from that project remain standing, as new development projects have been started around them.

Contemporary projects around the globe A view of Kansai International Airport from space.

Dubai has been building some of the largest artificial island complexes in the world. They include the three Palm Islands projects, The World, and the Dubai Waterfront. The last of these will be the largest in scale.

The Israeli government approved plans to construct artificial islands off the coasts of Tel Aviv, Herzliya, Netanya, and Haifa. Construction of the islands is likely to run in the billions of dollars, but they are expected to help with overcrowding in Israeli cities.[1]

In the Netherlands, a proposal has been made to create an artificial island that may be shaped like a tulip, in the North Sea.[2] It has been argued that the island would help ease overcrowding on the mainland and also protect the coastline from the rising sea.

Under the United Nations Convention on the Law of the Sea (UNCLOS) treaty, artificial islands have little legal recognition.[3] Such islands are not considered harbor works (Article 11) and are under the jurisdiction of the nearest coastal state if within 200 nautical miles (370 km) (Article 56). Artificial islands are not considered islands for purposes of having their own territorial waters or exclusive economic zones, and only the coastal state may authorize their construction (Article 60). However, on the high seas beyond national jurisdiction, any "state" may construct artificial islands (Article 87).

Some attempts to create micronations have involved artificial islands. They include the Principality of Sealand, located off the coast of Suffolk, England, and the Republic of Rose Island, constructed off the coast of Rimini, Italy. These attempts, however, were short-lived for differing reasons.