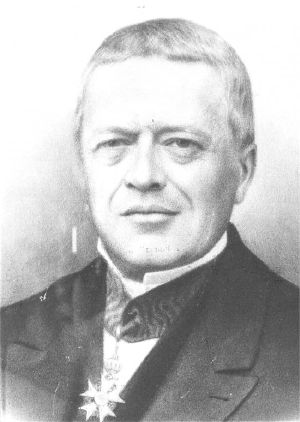 Antoine Augustin Cournot (August 28, 1801 – March 31, 1877) was a French mathematician and economist. He applied mathematics to the field of economics, not necessarily to produce numerical precision in a predictive fashion, but rather to provide clearer formulation of economic relationships.

Cournot's work, which included describing the behavior of monopolies and "duopolies" (the simplest type of oligopoly) using mathematical functions and graphing supply and demand as a function of price, is recognized as foundational in econometrics, a field that provides vital information for economic forecasting on the level of individual businesses as well as for national economies. Thus, Cournot's pioneering efforts allowed economics to develop in ways that enabled human society to maintain and develop healthy economic growth, and thus contributed to the well-being of all people.

Antoine Augustin Cournot was born on August 28, 1801, in the small town of Gray (Haute-Saône) in France. He was educated in the schools of Gray until he was 15. At 19, he enrolled in a mathematical preparatory course at a school in Besançon, and subsequently won entry into the École Normale Supérieure in Paris in 1821. In 1822, Cournot transferred to the Sorbonne, obtaining a licentiate in mathematics in 1823.

In Paris, he attended seminars at the Academie des Sciences and the salon of the economist Joseph Droz. Among his main intellectual influences were Pierre-Simon Laplace, Joseph-Louis Lagrange, and Hachette, a former disciple of Marie-Antoine Condorcet, who started him on the principles of mathematique sociale, i.e., the idea that the social sciences, like the natural sciences, could be dealt with mathematically. Cournot counted the young mathematician Lejeune Dirichlet as a close friend.

From 1823, Cournot was employed as a literary advisor to Marshal Gouvoin Saint Cyr and as a tutor to his son. In 1829, Cournot acquired a doctorate in sciences, focusing on mechanics and astronomy.

In 1834, Cournot found a permanent appointment as professor of analysis and mechanics at Lyons. A year later, Siméon-Denis Poisson secured him a rectorship at the Academy of Grenoble. Although his duties were mostly administrative, Cournot excelled at them. In 1838 (again, at the instigation of the loyal Poisson), Cournot was called to Paris as Inspecteur Général des Études. In that same year, he was made a knight of the Légion d'honneur (he was elevated to an officer in 1845).

Cournot's economic masterpiece received hardly any response (or when there was a response, it was highly critical) when it came out in 1838. The denizens of the French Liberal School, who dominated the economics profession in France at the time, took no notice of it, leaving Cournot crushed and bitter. By the time Cournot died in 1877, he was nearly blind.

Cournot began with some preliminary remarks on the role of mathematics applied to the social sciences. He believed that economists must utilize the tools of mathematics only to establish probable limits and to express less stable facts in more absolute terms. He further held that the practical uses of mathematics in economics do not necessarily involve strict numerical precision, and that his purpose in using mathematics is merely to guide his reasoning and illustrate his argument rather than lead to any numerical calculations.

It was in 1838 that Cournot published his economics masterpiece, the Recherches sur les principes mathématiques de la théorie des richesses, translated as Researches on the Mathematical Principles of the Theory of Wealth (1838 [1938]). In this book he presented his concepts of monopoly, oligopoly (in Cournot's case "duopoly"), and perfect competition.

In demonstrating the equilibrium of his oligopoly game, Cournot introduced a form of "best-reply dynamics," in which each firm selects the quantity that maximizes its profit in response to the total industry output of the previous period. Through this, he introduced the ideas of functions and probability into economic analysis.

In the beginning of Recherches, Cournot runs through the definition of wealth, absolute versus relative prices, and the law of one price.

Then, he unveiled his first formula for the rule of supply and demand as a function of price. He wrote it in general form as

He assumes that the function (f), is continuous and takes it as an empirical proposition that the demand function is downward-sloping (the loi de debit, "law of demand") and proceeds to draw it in price-quantity space. He also introduces the idea of "elasticity," but does not write it down in a mathematical formula. It is important to note that Cournot's "demand function" is not a demand schedule in the modern sense.

Accessory ideas of utility, scarcity, and suitability to the needs and enjoyments of mankind…are variable and by nature indeterminate, and consequently ill suited for the foundation of a scientific theory (1838:10).

The utility of the article, the nature of the services it can render or the enjoyments it can procure, on the habits and customs of the people, on the average wealth, and on the scale on which wealth is distributed” (1838: 47).

Cournot's analysis of monopoly begins with his introduction of the concept of a profit-maximizing producer. Cournot introduces the "cost function" represented by f ( D ), where D is demand or quantity, and discusses decreasing, constant, and increasing costs to scale. He shows mathematically how a producer will choose to produce at a quantity (denoted by the first derivative of cost function f’ [ . ] and, hence, where marginal revenue f' [ D ( p ) ] is equal to marginal cost y ( p )). Marginal cost is thus the extra or the increase in total cost required to produce 1 extra unit of output, or the reduction in total cost from producing 1 unit less.

Cournot presented his famous model of a "duopoly" (a simpler form of oligopoly where only two producers dominate a market), with the following features:

In his model, price is a commonly known decreasing function of total output. All firms know the total number of firms in the market, and take the output of the others as given. Each firm has a cost function. Normally the cost functions are treated as common knowledge. The cost functions may be the same or different among firms. The market price is set at a level such that demand equals the total quantity produced by both firms. Each firm takes the quantity set by its competitors as a given, evaluates its residual demand, and then behaves as a monopoly.

Cournot set up a mathematical model with two rival producers of a homogeneous product. Each producer is conscious that his rival's quantity decision will also impact the price he faces, and thus his profits, but each firm decides independently how much to produce and put on the market. However, the market price of the commodity is determined by the inverse demand function applied to the sum of what both firms put on the market. Consequently, each producer chooses a quantity that maximizes his profits subject to the quantity reactions of his rival.

Cournot mathematically derives a deterministic solution, as the quantities chosen by the rival producers are in accordance with each other's anticipated reactions. He shows how this equilibrium can be drawn as the intersection of two "reaction curves."

Comparing solutions, Cournot notes that under duopoly, the price is lower and the total quantity produced greater than under monopoly. He runs with this insight, showing that as the number of producers increases, the quantity becomes greater and the price lower.

Cournot introduced the case of unlimited competition, i.e., where the quantity of producers is so great that the entry or departure of an individual producer has a negligible effect on the total quantity produced. He goes on to derive the prices and quantities in this "perfectly competitive" situation, in particular showing that, at the solution, price is equal to the marginal cost y ( p ) as defined above.

The outcome is found by applying Cournot's concept of game theory. The firms in the model do not collude to achieve monopoly, but still achieve greater profits than they would in a competitive market. A nice feature of the model is that as more firms are added, the price goes to the competitive price, which is equal to marginal cost.

Cournot described what he called the "communication of markets," or trade of a single good between regions. He analyzed two isolated countries and one homogeneous product, showing that the impact of opening trade between the two countries leads to the equalization of prices, with the lower cost producer exporting to the higher cost country. Cournot tried to prove that there are conditions where the opening of trade will lead to a decline in the quantity of the product and lower revenue.

Finally, Cournot also acknowledged that the solutions obtained via his "partial equilibrium" theory are incomplete. He recognized the need to take multiple markets into account and trying to solve for the general equilibrium, but "this would surpass the powers of mathematical analysis" (Cournot 1838:127).

In 1843, Cournot made his first serious attempt at improving probability theory in his Exposition. He differentiated between three types of probabilities: objective, subjective, and philosophical.

The former two follow their standard ontological and epistemological definitions. They are basically what Keynes defined as "having enough rational constraints to make degree of belief or 'degree of confirmation' unique" and, as such, are similar to the later Bayesian philosophy of statistics "with certain previously known information."

The third category refers to probability "which depends mainly on the idea that we have of the simplicity of the laws of nature" (Cournot 1843: 440). This is the original "frequentist" philosophy based on the samples of large numbers with truly random outcome.

Cournot was primarily a mathematician, but he did have some influence over economics. In 1838, his book Researches on the Mathematical Principals of the Theory of Wealth was published, in which he introduced the ideas of mathematical functions and probability into economic analysis. Many economists have come to believe this book to be the point of departure for modern econometrics.

Cournot derived the first formula for the rule of supply and demand as a function of price and was the first to draw supply and demand curves on a graph, anticipating the work of Alfred Marshall by roughly thirty years. In fact, Marshall himself claimed to have read Cournot's work as far back as 1868, and extensively acknowledged Cournot's influence in his 1890 textbook, particularly in his discussion of the theory of the firm. Cournot’s theories on monopolies and "duopolies" are still famous.