Anna-Lou "Annie" Leibovitz (October 2, 1949 - ) is an American portrait photographer whose style is marked by a close collaboration between the photographer and the subject.

Working for Vanity Fair since 1983, she has photographed numerous stars and celebrities, from teen actress Miley Cyrus to England's Queen Elizabeth II. Her photos were first recognized by Rolling Stone Magazine, which named her its chief photographer in 1973.

Leibovitz, whose most famous cover photos often involve nudity, has established herself as an astute observer of American popular culture and has published seven books, including the uniquely personal, A Photographer’s Life 1990-2005, with photos of her close companion and mentor, author Susan Sontag. In 2005, American Photo named her the most influential photographer currently at work.

Born in Waterbury, Connecticut, Leibovitz was the third of six children in a Jewish family. Her mother was a modern dance instructor, while her father was a lieutenant colonel in the United States Air Force. The family moved frequently with her father's duty assignments.

In high school, she became interested in various artistic endeavors and began to write and play music. She then attended the San Francisco Art Institute and wanted to be an art teacher. She became interested in photography after taking pictures when she lived in the Philippines, where her father was stationed during the Vietnam War. For several years, she continued to develop her photography skills while she worked various jobs, including a period on a kibbutz in Israel for several months in 1969.

On December 8, 1980, Leibovitz was assigned a photo shoot with John Lennon for the cover of Rolling Stone. After she initially tried to get a picture with Lennon alone, as requested by the magazine, Lennon insisted that both he and Yoko Ono be on the cover. Leibovitz tried to re-create the kissing scene from Lennon and Oko's recently-released Double Fantasy album cover, a picture that she loved. She had Lennon remove his clothes and curl up next to Yoko. Leibovitz recalls: "She said she'd take her top off and I said, 'Leave everything on'—not really preconceiving the picture at all. Then he curled up next to her and it was very, very strong. You couldn't help but feel that she was (emotionally) cold and he looked like he was clinging on to her… John said, 'You've captured our relationship exactly."[1] Lennon was shot and killed five hours later, giving her portrait of him and Ono instant notoriety.

Since 1983, Leibovitz has worked as a featured portrait photographer for Vanity Fair. One of her most famous photos for the magazine was a cover portrait of an unclothed and pregnant Demi Moore from a 1991 issue titled "More Demi Moore."

Leibovitz later sued Paramount Pictures for copyright infringement of the shot after Paramount had commissioned a parody photograph of actor Leslie Nielsen, "pregnant," for use in a promotional poster for the 1994 comedy Naked Gun 33⅓: The Final Insult. Leibovitz v. Paramount Pictures Corp., has become an important fair use case in U.S. copyright law. At trial, the United States District Court for the Southern District of New York found that Paramount's use of the photo constituted fair use because parodies were likely to generate little or no licensing revenue. On appeal, the United States Court of Appeals for the Second Circuit affirmed the verdict.

On April 25, 2008, the televised entertainment program Entertainment Tonight reported that 15-year-old Miley Cyrus had posed topless for a photo shoot with Vanity Fair, which Leibovitz had conducted. The photo, and several behind-the-scenes photos show Cyrus without a top, her bare back exposed but her front covered with a bedsheet. Some parents expressed outrage at the nature of the photograph, which a Disney spokesperson described as being "created to deliberately manipulate a 15-year-old in order to sell magazines."[2]

In response to the ensuing media attention, Cyrus released a statement of apology on April 27: “I took part in a photo shoot that was supposed to be ‘artistic’ and now, seeing the photographs and reading the story, I feel so embarrassed. I never intended for any of this to happen and I apologize to my fans who I care so deeply about."[3]

Leibovitz herself released a statement saying: “I'm sorry that my portrait of Miley has been misinterpreted," Leibovitz said. "The photograph is a simple, classic portrait, shot with very little makeup, and I think it is very beautiful.[4] 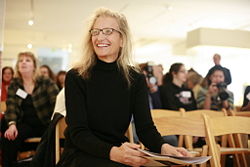 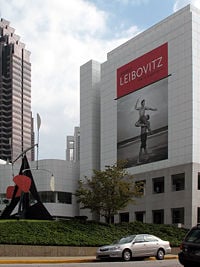 Leibovitz's exhibition at The Museum of Art in Atlanta, GA, September, 2007

Leibovitz had a close romantic relationship with noted writer and essayist Susan Sontag, who was 16 years her senior. The couple met in 1988 when Leibovitz photographed Sontag for the book jacket. Leibovitz has stated that Sontag mentored her, and constructively criticized her work, and helped her finally feel at home in New York.

After Sontag's death in 2004, Newsweek published an article about Leibovitz that made reference to the relationship with Sontag. Neither of them had previously disclosed that the relationship was an intimate one. Leibovitz later acknowledged that she and Sontag were romantically involved.

Leibovitz has three children: Sarah Cameron Leibovitz (b. October 2001) was born when Leibovitz was 51 years old. Her twins Susan and Samuelle were born to a surrogate mother in May 2005.

Retrieved from https://www.newworldencyclopedia.org/p/index.php?title=Annie_Leibovitz&oldid=1094490
Categories:
Hidden category:
This page was last edited on 9 January 2023, at 01:54.
Content is available under Creative Commons Attribution/Share-Alike License; additional terms may apply. See Terms of Use for details.