Annie Oakley, (August 13, 1860 – November 3, 1926), born Phoebe Ann Mosey, was an American sharpshooter and exhibition shooter. Oakley's amazing talent and luck led to her timely rise to fame and a starring role in Buffalo Bill's Wild West show, which created a lucky opening for Annie Oakley to replace Bogardus and propelled her to become one of the first American female superstars.

Using a .22 caliber rifle at 90 feet (27 m), Oakley could split a playing card edge-on and put five or six more holes in it before it touched the ground. 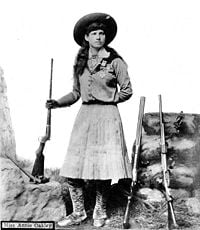 Phoebe Ann Mosey was born in "a cabin less than two miles northwest of Woodland, now Willowdell, in Partentown Darke County," a rural western county of Ohio on the Indiana border.[1] Her birthplace is situated equally about five miles east south eastward of North Star, OH. There is a stone-mounted plaque in the vicinity of the cabin site, placed there by the Annie Oakley Committee in 1981, 121 years after her birth.

Annie's parents were Quakers from Hollidaysburg, Blair County, Pennsylvania who operated a tavern there. Her mother, Susan Wise, age 18, and father, Jacob Mosey, age 49, were married in 1848. The family name has been a source of confusion: Annie's brother, John, born a two years later, insisted that their name was Moses. Annie was equally insistent that it was Mosey, or Mozee. The 1860 U.S. Census shows their father's name as Mauzy, born 1799. "Mosey," appears on her father's gravestone, in his military record, and is the official spelling by the Annie Oakley Foundation which is maintained by her living relatives.[2] When a fire burned down the tavern, her parents moved to western Ohio and rented a farm, later purchased with a mortgage, in Patterson Township, Darke County. Her father, a veteran of the War of 1812, died in 1866 from pneumonia and exposure in freezing weather.

Following her first husband's death, Susan Mosey remarried, gave birth to another child, and was widowed a second time. Annie did not go to school. On March 15, 1870, at age nine, Annie and her older sister Sarah Ellen were put in the care of the superintendent of the county poor farm, the Darke County Infirmary. There she learned to embroider and sew. She spent nearly two years in near servitude with a local family where she endured mental and physical abuse. Throughout her life, Annie referred to them only as "the wolves."[3] In the Spring of 1872, Annie was re-united with her family and mother who had married a third time, to Joseph Shaw. 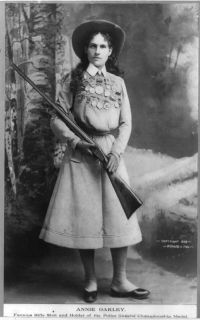 Annie began trapping, shooting and hunting by the time she was eight years old to support her family and widowed mother. She sold the hunted game to locals in Greenville, as well as restaurants and hotels in southern Ohio. Her skill eventually paid the mortgage on her mother's farm when Annie was 15 years old.[1]

Annie soon became known throughout the region as a sharpshooter. During the spring of 1881, the Baughman and Butler shooting act was being performed in Cincinnati. Marksman Francis "Frank" E. Butler (1850-1926), bet a hotel owner $100 that he could beat any local fancy shooter. The hotelier arranged a shooting match with the locally well-known Annie Mosey to be held in ten days time in a small town near Greenville, Ohio. Frank Butler later said it was "eighteen miles from the nearest station" (about the distance from Greenville to North Star). After missing his twenty fifth shot, Butler lost the match and the bet. A short time later, he began courting Annie, won her heart, and they began a happy marriage of forty four years on June 20, 1882. 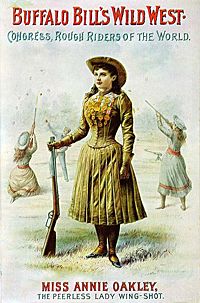 The couple lived in Cincinnati for a time, and Annie is believed to have taken her stage name from the city's neighborhood of Oakley, where they resided. At first, Oakley was Frank's assistant in his traveling show. Later, he realized that Annie was more talented, so he became her assistant and business manager. Annie and Frank's personal and business success in handling celebrity is considered a model show business relationship, even after more than a century.

Butler and Oakley joined the Buffalo Bill's Wild West show in 1885. Standing only 5 feet (1.5 m), Annie was given the nickname of "Watanya Cicilla," rendered "Little Sure Shot" in the public advertisements, by fellow performer Sitting Bull who was deeply moved by Annie's talent and adopted her as his daughter.[4]

In Europe, she performed for Queen Victoria of Great Britain, King Umberto I of Italy, Marie François Sadi Carnot (the President of France) and other crowned heads of state. Her marksmanship was so widely renowned that, at his request, Annie knocked the ashes off a cigarette held by the Prince of Prussia, newly crowned Kaiser Wilhelm II.[5] It has often been suggested that if she would have shot Wilhelm and not his cigarette, she could have prevented World War I. After the outbreak of the war, it was reported that Oakley sent a letter to the Kaiser, requesting a second shot.[6]

Oakley had initially responded to Smith's age rivalry by removing six years from her promoted age. However her overall deportment contrasted to Smith's tendency toward the flamboyant and Oakley refused to remove any more years without making it seem that she was born out of wedlock after her father died. As it was, her briefly promoted age led to perennial wrong calculations of her true age and the dates for some of her biographical events. By way of example, the 1881 Spring shooting match with Butler occurred when she was twenty-one years old. However, the event was widely repeated as occurring six years earlier in the fall, suggesting the myth of a teen romance with Butler.

Oakley promoted the service of women in combat to the United States armed forces. She wrote a letter to President William McKinley on April 5, 1898 "offering the government the services of a company of 50 'lady sharpshooters' who would provide their own arms and ammunition should the U.S. go to war with Spain."[7] Her offer was not accepted. Theodore Roosevelt did, however, name his volunteer cavalry the "Rough Riders" after the "Buffalo Bill's Wild West and Congress of Rough Riders of the World" where Oakley was a major star. 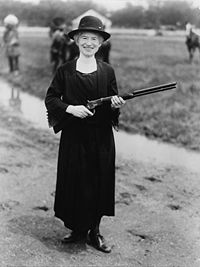 In 1901 she was badly injured in a railway crash. Oakley fully recovered after suffering temporary paralysis and undergoing several spinal operations. Soon after she left the Buffalo Bill show and began a quieter stage career in the vaudeville show, The Western Girl. In 1903, sensational cocaine prohibition stories were selling well. The newspaper magnate, William Randolph Hearst, published a false story that Oakley had been arrested for stealing to support a cocaine habit. She spent much of the next six years winning or settling 54 of 55 libel lawsuits against newspapers that printed the story. She collected less in judgments than were her legal expenses, but to her, a restored reputation justified the loss of time and money.[8]

Annie continued to set records into her sixties, even after suffering a debilitating automobile accident in 1922 that forced her to wear a steel brace on her right leg. She engaged in extensive, albeit quiet, philanthropy for women's rights and other causes, including the support of specific young women that she knew.

Annie Oakley died on November 3, 1926, of pernicious anemia, at the age of 66. Her husband, Frank Butler, died just eighteen days later. After her death it was discovered that her entire fortune had been given to family and spent on her charities.

Representations on stage and screen

Retrieved from https://www.newworldencyclopedia.org/p/index.php?title=Annie_Oakley&oldid=1059526
Categories:
Hidden category:
This page was last edited on 30 October 2021, at 10:41.
Content is available under Creative Commons Attribution/Share-Alike License; additional terms may apply. See Terms of Use for details.