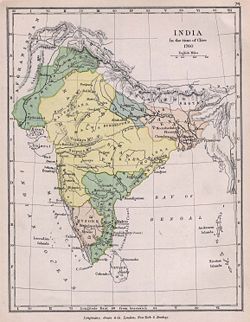 Extent of the Maratha Empire ca. 1760
(shown here in yellow).

The first, second, and third Anglo-Maratha wars were fought between the army of the British East India Company, which after 1757 was de facto ruler of Bengal and of other provinces in North East India, and the Maratha Empire, or confederacy, in the south of India. The Moghul Empire was already effectively under British control but its power had never extended far into the South, where the French—defeated in the North at the Battle of Plassey (1757)—still vied with the British for dominance. The wars started in 1777 and ended with British victory in 1818. This left the British in control, directly or indirectly via treaties with Princely states, of a vast proportion of India, making India the jewel in the crown of the British Empire. Typically, the British divided and ruled by benefiting from conflict between different Indian rulers, such as that between the ruler of Indore, and the Maratha overlord, or Peshwa and by neutralizing others. What had started as a commercial enterprise was now a full-blown imperial project. Making a profit for the mother-land was still the bottom line but the concept of the British race as destined to rule others, for their eventual benefit, was now rapidly developing. As Rudyard Kipling, the India-born novelist and poet of Empire would put later it, it was ‘the white man’s burden’ to shed light into dark places to ‘seek another’s profit and work another’s gain.’[1] though the more cynical Mary Henrietta Kingley, the African explorer, described empire as the ‘blackman’s burden’ for its often wonton destruction of other cultures.

India’s cultures were never quite as despised as those of Africa but they were regarded as decadent and immoral, and thus in need of correction. If at the start of the Maratha wars men such as Warren Hastings (Governor-General 1773-1785) valued Indian culture and thought more of partnership than domination, at the end of the Maratha wars, India was ready to be possessed, mapped, defined and ‘owned’ in its entirety in true, full bodied Orientalist style.[2] This feeling of ownership was further consolidated after the failure of the 1857 First War of Indian Independence or Mutiny when governmental responsibility was transferred to Westminster, and was finally sealed (May 1, 1876) when Queen Victoria was proclaimed Empress of India.

After the death of Madhavrao Peshwa in 1772, his brother Narayanrao Peshwa ascended the position of Peshwa of the Maratha Empire. However, Raghunathrao, Narayanrao’s uncle, had his nephew assassinated in a palace conspiracy that placed Raghunathrao as the next Peshwa, although he was not a legal heir. However, the late Narayanrao’s widow, Gangabai, gave birth to a son after her husband’s death. The newborn infant was named ‘Sawai’ (“One and a Quarter”) Madhavrao and legally was the next Peshwa. Twelve Maratha chiefs, led by Nana Phadnis directed an effort to name the infant as the new Peshwa and rule under him as regents. Raghunathrao, unwilling to give up his position of power, sought help from the British at Bombay and signed the Treaty of Surat on March 7, 1777. According to the treaty, Raghunathrao ceded the territories of Salsette and Bassein to the British along with parts of revenues from Surat and Bharuch districts. In return, the British were to provide Raghunathrao with 2,500 soldiers. The British Calcutta Council, on the other side of India, condemned the Treaty of Surat and sent Colonel Upton to Pune to annul it. The Colonel was also sent to make a new treaty with the regency that renounced Raghunath and promised him a pension. The Bombay government rejected this and gave refuge to Raghunath. In 1777 Nana Phadnis violated his treaty with the Calcutta Council by granting the French a port on the west coast. The British replied by sending a force towards Pune.

The British Governor-General in Bengal, Warren Hastings, rejected this treaty and sent a large force of soldiers across India under Colonel Goddard. Goddard captured Ahmedabad in February 1779, and Bassein in December 1780. Another Bengal detachment led by Captain Popham captured Gwalior in August 1780. Hastings sent yet another force after Mahadji Shinde. In February 1781, led by General Camac, the British finally defeated Shinde at Sipri.

After the defeat, Shinde proposed a new treaty between the Peshwa and the British that would recognize the young Madhavrao as the Peshwa and grant Raghunathrao a pension. This treaty, known as the Treaty of Salbai, was signed in May 1782, and was ratified by Hastings in June 1782 and by Phadnis in February 1783. The treaty also returned to Shinde all his territories west of the Yamuna. It also guaranteed peace between the two sides for twenty years, thus ending the war.

The Second Anglo-Maratha War (1803 - 1805) was the second conflict between the United Kingdom and the Maratha Empire in India.

The overweening ambition of Raghunath Rao, Peshwa Baji Rao II's father, and the latter's own incompetence since coming into his inheritance, had long occasioned much internecine intrigue within the Maratha confederacy; Peshwa Baji Rao II no longer commanded the deference his predecessors had.

In October 1802, Peshwa Baji Rao II was defeated by one of his own nominal subordinates, the Holkar ruler of Indore, at the battle of Poona.

Baji Rao II fled to British protection, and in December the same year concluded the Treaty of Bassein with the British East India Company, ceding territory for the maintenance of a subsidiary force and agreeing to not to enter treaties with any other power.

At the Battle of Assaye (the fictional venue of Richard Sharpe's triumph[3]) on September 23, 1803—the British led by the future 1st Duke of Wellington in what was his first major military success defeated the Maratha rebels on behalf of Baji Rao, whom they restored to power in terms of the Treaty of Bassein.

This act of craven expediency on the part of the Peshwa, their nominal overlord, horrified and disgusted the Maratha chieftains, who wanted least of all to see an extension of British power; in particular, the Sindhia rulers of Gwalior and the Bhonsle rulers of Nagpur and Berar contested the agreement. They were defeated, respectively, at Laswari and Delhi by Lord Lake and at Assaye and Argaon by Sir Arthur Wellesley. The Holkar rulers of Indore belatedly joined the fray and were also defeated by the British.

Peace was concluded in 1805, with the British acquiring Orissa and parts of western Gujarat and Bundelkhand from the Marathas, who were left with a free hand in much of central India. The Scindia Maharajas retained control and overlordship over much of Rajasthan.

The Third Anglo-Maratha War (1817 - 1818) was a final and decisive conflict between the British and the Maratha Empire in India, which left the U.K. in control of most of India. 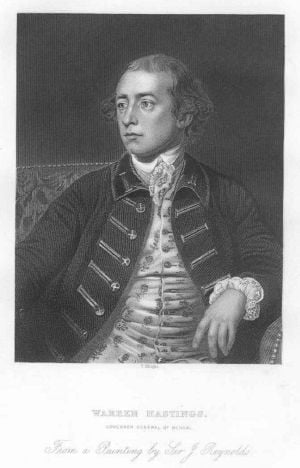 It began with an invasion of Maratha territory by the British governor-general, Lord Hastings, in the course of operations against Pindari robber bands. The Peshwa of Pune's forces, followed by those of the Bhonsle of Nagpur and Holkar of Indore, rose against the British, but British diplomacy convinced the Sindhia of Gwalior to remain neutral, although he lost control of Rajasthan. British victory was swift, and resulted in the breakup of the Maratha empire and the loss of Maratha independence to the British. The Peshwa was pensioned off, and most of his territory was annexed to Bombay Presidency, although the Maharaja of Satara was restored as ruler of a princely state until its annexation to Bombay state in 1848. The northern portion of the Nagpur Bhonsle dominions, together with the Peshwa's territories in Bundelkhand, were annexed to British India as the Saugor and Nerbudda Territories. The Maratha kingdoms of Indore, Gwalior, Nagpur, and Jhansi became princely states, acknowledging British control.

The Third Anglo-Maratha War left the British in control of virtually all of present-day India south of the Sutlej River.

Retrieved from https://www.newworldencyclopedia.org/p/index.php?title=Anglo-Maratha_Wars&oldid=1054422
Categories:
Hidden category:
This page was last edited on 20 June 2021, at 03:11.
Content is available under Creative Commons Attribution/Share-Alike License; additional terms may apply. See Terms of Use for details.