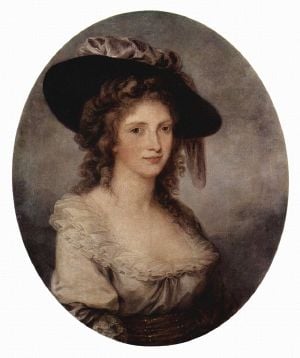 Trained by her father, Kauffmann she was a child prodigy who produced commissioned portraits in her early teens. She later became an widely admired painter, etcher, designer, miniaturist, and printmaker. She was especially fond of history painting.

Kauffmann also lived in England and Italy, and she spoke French, German, and English fluently. Gaining wide popularity during her own lifetime, she was a personal friend of such notables such as Johann Wolfgang von Goethe and Sir Joshua Reynolds. One of London's most sought-after portraitists, by 1787 she had become one of the most famous and successful living painters in Rome. She was also one of the signatories of the petition to the king of England for the establishment of the The Royal Academy of Arts of which she was a founding member.

Kauffmann was born at Chur in Graubünden, Switzerland, but grew up in Schwarzenberg, Austria. She was trained by her father, the Swiss muralist Johann Joseph Kauffmann. A poor man and mediocre painter, he was apparently very successful in teaching his precocious daughter.

She rapidly acquired several languages, read incessantly, and showed marked talents as a musician. Her greatest progress, however, was in painting. By her twelfth year she had already developed a reputation as a portrait artist, with bishops and nobles for her sitters.

In 1754 her father took her to Milan. During the early 1760s she traveled through Switzerland, Austria, and Italy, working as her father's assistant. From this she had the rare opportunity for a woman to see and copy the works of ancient and Renaissance masters, and to meet leaders of the popular new movement known as neoclassicism. In 1763 she visited Rome, returning again in 1764. From Rome she passed to Bologna and Venice, being everywhere feted and praised, as much for her talents as for her personal charms.

Fame as a painter 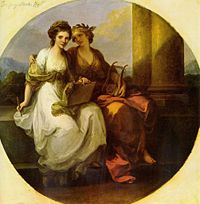 Allegory of poetry and music

Writing from Rome in August 1764 German art historian and archaeologist Johann Winckelmann, referred to Kauffmann's exceptional popularity. At the time, she was painting his picture, a half-length portrait, of which she also made an etching. Winckelmann relates that she spoke Italian as well as German; and she also expressed herself with facility in French and English. One result of her mastery of English was that she became a popular portraitist for English visitors to Rome. "She may be styled beautiful," Winckelmann adds, "and in singing may vie with our best virtuosi."

While at Venice, Kauffmann was induced by Lady Wentworth, the wife of the English ambassador, to accompany her to London. One of her first works there was a portrait of actor and playwright David Garrick, exhibited in the year of her arrival at "Mr Moreing's great room in Maiden Lane." The support of the noble Lady Wentworth opened society to her, and she was well received everywhere she went, the royal family especially showing her great favor.

Her firmest friend, however, was the influential painter Sir Joshua Reynolds. In his notebook, her name as Miss Angelica or Miss Angel appears frequently, and in 1766 he painted her, a compliment which she returned by her Portrait of Sir Joshua Reynolds. Another instance of her close association with Reynolds is found in her variation of Guercino's Et in Arcadia ego, a subject which Reynolds repeated a few years later in his portrait of Mrs. Bouverie and Mrs. Crewe.

When, in about November 1767, Kauffmann was seduced into a clandestine marriage with an adventurer who passed for a Swedish count (the Count de Horn), Reynolds helped extract her. It was also owing to his good offices that she was among the signatories to the famous petition to the king for the establishment of the The Royal Academy of Arts of which she became a member. In its first catalog of 1769 she appears with "R.A." (for Royal Academy) after her name (an honor she shared with only one other lady, Mary Moser). To this collection she contributed the Interview of Hector and Andromache, and three other classical compositions. 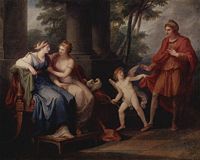 Her friendship with Reynolds was criticized in 1775 by fellow Academician Nathaniel Hone in his satirical picture "The Conjurer." This work attacked the current fashion for Italianate Renaissance art, ridiculed Reynolds, and included a nude caricature of Kauffmann, later painted out by Hone. The work was rejected by the Royal Academy.

From 1769 until 1782, she was an annual exhibitor at the Academy, sending as many as seven pictures in a year, generally dealing with classical or allegorical subjects. One of the most notable was Leonardo expiring in the Arms of Francis the First 1778. In 1773 she was appointed by the Academy along with several others to decorate St Paul's Cathedral. It was also she who, with Biagio Rebecca, painted the Academy's old lecture room at Somerset House. 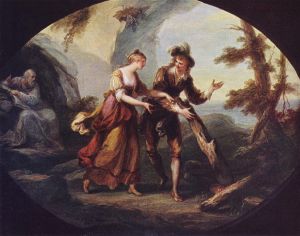 Miranda and Ferdinand in The Tempest, 1782.

Kauffmann's greatest strength was her work in history painting, the most elite and lucrative category in academic painting during the eighteenth century. Under the direction of Reynolds, the Academy made a strong effort to promote history painting to a native audience more interested in commissioning and buying portraits and landscapes.

Despite the popularity that Kauffmann enjoyed in English society and her success as an artist, she was disappointed by the relative apathy that the English had for history painting. Ultimately, she left England for the continent, where history painting was better established, esteemed, and patronized. 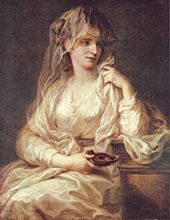 Portrait of a lady from Westphalia

Her popularity had apparently declined somewhat in consequence of her unfortunate marriage. However, in 1781, after her first husband's death—she had been long separated from him—her personal reputation benefited by her marriage to Antonio Zucchi (1728–1795), a Venetian artist then resident in England. Shortly afterward they returned to Rome where her studio became a focal point for that city’s cultural life. There, she befriended, among others, Johann Wolfgang von Goethe, who said she worked harder and accomplished more than any artist he knew. In 1782 she lost her father, but became one of Rome's most prestigious and productive artists. After her husband's death in 1795, she continued at intervals to contribute to the Academy, her last exhibit there being in 1797.

After this she produced little, and in 1807 she died in Rome. By the time of her death she had achieved such renown that her funeral was directed by the prominent Neoclassical sculptor Antonia Canova, who based it on the funeral of the Renaissance master Raphael. The entire Academy of St. Luke, with numerous ecclesiastics and virtuosi, followed her to her tomb in San Andrea delle Fratte, and, as at the burial of Raphael, two of her best pictures were carried in procession.

Despite her renown during her lifetime, the works of Angelica Kauffmann have not retained their reputation. She had a certain gift of grace, and considerable skill in composition, but critics claim that her figures lack variety and expression; and her men are "masculine women." Her coloring, as described by Gustav Friedrich Waagen, is "cheerful."

As of 1911, rooms decorated by her brush were still to be seen in various quarters. At Hampton Court was a portrait of the duchess of Brunswick; in the National Portrait Gallery, was a self-portrait. There were other pictures by her at Paris, Dresden, in the Hermitage at St. Petersburg, and in the Alte Pinakothek at Munich. The Munich example was another portrait of herself done in 1767,[1] and there was a third in the Uffizi at Florence. A few of her works in private collections were exhibited among the Old Masters at Burlington House.

Kauffmann is perhaps best known by the numerous engravings from her designs by Schiavonetti, Bartolozzi and others. Those by Bartolozzi especially still found considerable favor with collectors. 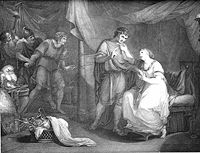 An engraving from a scene from Troilus and Cressida

A Scene from Troilus and Cressida is one of two paintings Kauffmann contributed to Boydell's Shakespeare Gallery. Kauffmann kept good records of her works and the amounts paid for them, she was a good accountant as well as a competent painter.

A warm-hearted woman and friend, she was a colleague of Mary Moser, a teacher of Robert Home, a mentor of Maria Cosway, Georgiana Keate, and a mentor and cousin of Rosa Florini. She shared her talents and encouraged other women to paint as well.

Charles Willson Peale (1741-1827), artist, patriot, and founder of a major American art dynasty, named several of his children after great European artists, including a daughter, Angelica Kauffman Peale. Her life was written in 1810 by Giovanni de Rossi. It has also been used as the basis of a romance by Leon de Wailly (1838) and it prompted the charming novel contributed by Mrs. Richmond Ritchie to the Cornhill Magazine in 1875 entitled Miss Angel.

Retrieved from https://www.newworldencyclopedia.org/p/index.php?title=Angelica_Kauffmann&oldid=1054404
Categories:
Hidden category:
This page was last edited on 19 June 2021, at 07:39.
Content is available under Creative Commons Attribution/Share-Alike License; additional terms may apply. See Terms of Use for details.