Al-Haji Sir Ahmadu Bello (June 12, 1910 - January 15, 1966) was a Nigerian politician, and was the first premier of the Northern Nigeria region from 1954-1966. He is considered to be a founding father of the modern Nigerian nation state, which was formed October 1, 1960 when Bello's NPC forged an alliance with Dr. Nnamdi Azikiwe's NCNC (National Council of Nigeria and the Cameroons) to form Nigeria's first indigenous federal government which led to independence from Britain. Despite his popularity and political support, Bello chose to remain in the North instead of accepting the post of national Prime Minister, which would have required living in the South.

Bello combined traditional leadership qualities with knowledge of Western governance. Bello's greatest legacy was the modernization and unification of the diverse people of Northern Nigeria.

Ahmadu Bello was born on June 12, 1910, in Rabbah, Sokoto State, the son of a district head and heir to the Sokoto Emirate. His great-grandfather was Sultan Bello, son of the revered Usman Dan Fodio who founded the Fulani Empire, which was the largest in Sub-Saharan Africa.[1] Ahmadu Bello received his education first at the feet of Muslim masters, studying the Quran, the hadith, and Shariah, then at Sokoto Middle School, the only modern school at the time in the Sokoto province (1917-1926).

He then proceeded to the Katsina Teacher's Training College. After spending five years at Katsina, he was appointed by the Sultan as a teacher in his own former school in Sokoto. In 1934, he was made the district head of Rabbah within the Sultan's administration. Four years later, he was promoted and sent to Gusau to become a divisional head. In 1938, he made an unsuccessful bid to become the new Sultan of Sokoto. The successful sultan immediately conferred on him the traditional, now honorary, title of "Sarduna" and elevated him to the Sokoto Native Authority Council. He first became politically active in 1945, when he helped to form a Youth Social Circle, which later (1948) affiliated with the NPC (Northern Peoples Congress) of which he became President-General in 1954. In 1948, he was offered a scholarship to study local government administration in England. Ahmadu Bello took the scholarship, sensing he needed to develop his knowledge about the process of governance.

After returning from England, he was nominated to represent the province of Sokoto in the regional House of Assembly, and elected. As a member of the assembly, he was a notable voice for northern interest and embraced a style of consultation and consensus with the major representatives of the northern emirates: Kano, Bornu, and Sokoto. As the movement for independence from the British Empire gathered momentum, Bello emerged as a strong advocate of federalism as the system of government that in his view was most suitable for Nigeria. This was especially attractive to Northern Nigerians, who had a history of sharing power. Nigeria has some 300 clan groups. He may also have wanted to protect the North from what he perceived as the possibility of Southern domination. He also served on the national constitutional drafting commission as a representative of the North.[2]

In the first elections held in Northern Nigeria in 1952, Ahmadu Bello won a seat in the Northern House of Assembly, and became a member of the regional executive council as minister of works. Bello was successively minister of Works, of Local Government, and of Community Development in the Northern Region of Nigeria. In 1953 and in 1957, he led the Northern delegation during independence talks in London.

Premier of the North

In 1954, Bello became the first Premier of Northern Nigeria. In the 1959 independence elections, he led the NPC to win a plurality of the parliamentary seats. Bello's NPC forged an alliance with Dr. Nnamdi Azikiwe's NCNC (National Council of Nigeria and the Cameroons) to form Nigeria's first indigenous federal government which led to independence from Britain. In forming the 1960 independence federal government of the Nigeria, Bello as president of the NPC, chose—although arguably one of the most influential politicians in Nigeria—to remain Premier of Northern Nigeria and devolved the position of Prime Minister of the Federation to the deputy president of the NPC, Abubakar Tafawa Balewa. He apparently did not want to live in Lagos and preferred the political climate of the North from that of the South.[3] His disinclination to head the national government also suggests that he was not interested in power for the sake of power but in serving the people whose votes had elected him to office.

Bello's many political accomplishments include establishing the Northern Regional Development Corporation (NRDC)(subsequently the later the Northern Nigeria Development Corporation (NNDC), the Bank of the North, the Broadcasting Company of Northern Nigeria (BCNN) and the Nigeria Citizen Newspapers. The North was less developed economically than the South, and Bello argued that it was necessary for the North to catch up with the South for the sake of national unity. He traveled constantly across the North, meeting people and listening to their concerns.

Bellow was assassinated during a January 15, 1966, military coup which toppled Nigeria's post-independence government. He was still serving as premier of Northern Nigeria at the time. 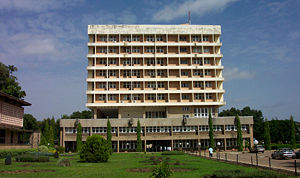 Ahmadu Bello University Senate building. Founded by Ahmadu Bello in 1962. He served as its first Chancellor.

Ahmadu Bello was a practicing Muslim. He married five times. In 1955, he performed the Hajj, becoming Alhaji Ahmadu Bello. From then until his death, he visited Mecca annually to perform the Umrah. He walked every day to his local Mosque for prayer. He chose "work and worship" as the slogan for Northern Nigeria. Bello established a reputation for religious toleration. On Christmas Day 1959 he stated, in a broadcast:

Here in the Northern Nigeria we have People of Many different races, tribes and religious who are knit together to common history, common interest and common ideas, the things that unite us are stronger than the things that divide us. I always remind people of our firmly rooted policy of religious tolerance. We have no intention of favoring one religion at the expense of another. Subject to the overriding need to preserve law and order, it is our determination that everyone should have absolute liberty to practice his belief according to the dictates of his conscience….[2]

Speaking about the vision of Ahmad Bello University, he stated:

The cardinal principle upon which our University is founded is to impart knowledge and learning to men and women of all races without any distinction on the grounds of race, religious, or political beliefs.[4]

Bello's greatest legacy was the modernization and unification of the diverse people of Northern Nigeria. He was awarded several honorary doctorates, including the Doctor of Law from UNN (University of Nigeria Nsukka) in December 1961. He was honored by the country from which he had helped to negotiate independence, being made a Knight of the British Empire (KBE) by Queen Elizabeth II in 1959 just before the end of colonial rule.

He founded the Ahmadu Bello University (1962) in Zaria, the second largest University in Africa, which is named after him. He was the University's first Chancellor. Nigeria's 200 naira carries his portrait. There is a 1995 biography about his first wife, Hafsatu Ahmadu Bello, who was slain alongside him. His assassination, for which members of the Igbo tribe were responsible, was one of the factors that led to the subsequent Civil War (1967-1970) when the Southern province of Biafra attempted to secede. He wanted both national and Pan-African unity. He did not waste time blaming the ills of his time on colonialism, but instead set out to develop his region and to adapt from the West what suited Nigeria, while retaining those cultural practices and values that were cherished and integral to Nigerian identity.

Retrieved from https://www.newworldencyclopedia.org/p/index.php?title=Ahmadu_Bello&oldid=1052100
Categories:
Hidden category:
This page was last edited on 30 April 2021, at 04:49.
Content is available under Creative Commons Attribution/Share-Alike License; additional terms may apply. See Terms of Use for details.