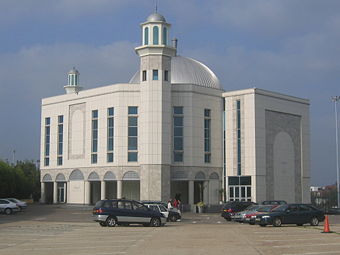 The Ahmadiyya Mosque in London, England.

The term Ahmadi (Urdu: Ø§Ø­Ù…Ø¯ÛŒÛ Ahmadiyya) refers to the followers of a controversial religious movement that emerged in Qadian, a small village in East Punjab India, during the end of the nineteenth century. The movement was founded by Mirza Ghulam Ahmad (d. 1908), a Muslim who claimed to have fulfilled Christian and Islamic prophecies by being the second advent of Christ as well as the Imam Mahdi and Mujaddid (reformer of the age) of the fourteenth Islamic century.[1] Ahmadis consider themselves Muslims, and Mirza Ghulam Ahmad termed the movement that he founded the Ahmadiyya Muslim Jamaat (community) envisioning it to be a revitalization of Islam. However, Ahmadis are not considered to be Muslims by Sunnis or Shias.[2][3][4]

Following Mirza Ghulam Ahmad's death, the original Ahmadiyya Muslim Jamaat split into two separate groups[5] known respectively as the Ahmadiyya Muslim Community and the smaller Lahore Ahmadiyya Movement for the Propagation of Islam (Ahmadiyya Anjuman Ishaat-i-Islam). These groups vary in their specific interpretations of the founder's teachings and claims. They also differ in their views on whom should have succeeded Mirza Ghulam Ahmad, and how such a successor should be chosen.[6][7]

The Ahmadi version of Islam has been controversial to mainstream Muslims since its birth. Muslims have not accepted Mirza Ghulam Ahmad's claims and do not consider Ahmadis to be Muslims at all citing in particular the Ahmadiyya view on ascension and return of Jesus, the concept of Jihad, and the Ahmadiyya Muslim Community view on the finality of Muhammad with particular reference to interpretation of verse [Quran 33:40] of the Qur'an.[8] Ahmadis, however, argue that their beliefs are in accordance with Islam,[9][10] and using arguments from the Qur'an, Hadith and opinion of Islamic jurists, challenge the contention of the groups calling them non-Muslims.[11]

The Ahmadiyya movement claims to represent the latter day renaissance of the religion of Islam. At the end of the nineteenth century, Mirza Ghulam Ahmad of Qadian proclaimed himself to be the "Reformer of the age" (Mujaddid), (Promised Messiah, Mahdi of the age.) (Note that the two sub-sects of the Ahmadiyya interpret this last claim very differently). He claimed to have fulfilled the prophecy of the return of Jesus. He and his followers claimed that his advent was foretold by both Prophet Muhammad and many other religious scriptures of the world. In 1889, Mirza Ghulam Ahmad laid down the foundation of his community, which was later given the name of "Ahmadiyya Muslim Jamaat." Since its inception, the Ahmadiyya Muslim Jamaat's objective has been the revival of Islam. Soon after the death of the first successor, the movement split into two sects over the question of the Finality of Prophethood. The Lahore Ahmadiyya Movement affirmed the traditional Islamic interpretation that there could be no new prophet after Muhammad and viewed itself as a reform movement within the broader Ummah.[12] The Ahmadiyya Muslim Community, however, claimed that Mirza Ghulam Ahmad had indeed been a prophet (albeit a "non-law-bearing" one) and that mainstream Muslims who rejected his message were guilty of disbelief. The question of "Khilafat" was also an issue in the split of the Ahmadiyya movement. The Lahore Ahmadiyya Movement believes that an "Anjuman" (body of selected people) should be in charge of the Jamaat. The Ahmadiyya Muslim Community, however, believes that Caliphs are appointed by God and they are in charge.

Some of the first people to convert to the Ahmadiyya movement were highly educated people from secular and religious circles. These included many civil servants and also from the military, such as Ali Gouhar of the British-Indian Army.[13] The Ahmadiyya Muslim Community has established offices in 190 countries and claims to have a population exceeding tens of millions.[14] The Lahore Ahmadiyya Movement has branches in 17 countries.[15] There is no reliable information available regarding the population numbers of the Lahore Ahmadiyya Movement.

Overseas Ahmadiyya missionary activities started as early as 1920s. For many modern nations of the world, the Ahmadiyya movement was their first contact with the proclaimants from the Muslim world.[16] Ahmadiyya movement is considered by some historians[17] as one of the precursors to the African-American Civil Rights Movement in America. According to some experts, Ahmadiyya were "arguably the most influential community in African-American Islam" until the 1950s, when Nation of Islam gained support among black communities.[18] Many notable Jazz musicians converted to Ahmadiyya Islam.[19] The influence of Ahmadiyya movement was later reduced by the splits among the community caused by Nation of Islam as well as the Sunni scholars during the 1950s.

In some countries it is a legal offence for the Ahmadiyya Movement to preach their religion as Islam. The Pakistani parliament has declared Ahmadis to be non-Muslims. In 1974, the government of Pakistan amended its constitution to define a Muslim "as a person who believes in the finality of the Prophet Muhammad".[20] Due to this strong clash of beliefs, Ahmadis have been the target of many attacks led by various religious groups.[21] As a result of the cultural implications of the laws and constitutional amendments regarding Ahmadis in Pakistan, persecution and hate-related incidents are constantly reported from different parts of the country. Religious seminaries and madrassahs in Pakistan, belonging to different sects of Islam have prescribed essential reading materials specifically targeted at refuting Ahmadiyya beliefs.[22] In a recent survey in Pakistan, pupils in private schools of Pakistan expressed their opinions on religious tolerance in the country. The figures assembled in the study reflect that even in the educated classes of Pakistan, Ahmadis are considered to be the least deserving minority in terms of equal opportunities and civil rights. In the same study, the teachers in these elite schools showed even lower amount of tolerance towards Ahmadis than their pupils.[23] Lahori Ahmadis claim that mainstream Muslim critics of Ahmadis often fail to note the important distinctions between the groups, treating all "Ahmadis" as members of the "Ahmadiyya Muslim Community."

In Bangladesh, fundamentalist Islamic groups have demanded that Ahmadiyyas be declared officially as kafirs (infidels). Ahmadiyyas have become a persecuted group, targeted via protests and acts of violence. According to Amnesty International, followers have been subject to "house arrest," and several have been killed. In late 2003, several large marches, led by Moulana Moahmud Hossain Mumtazi, were directed to occupy an Ahmadi mosque. The march was supported by thousands of protesters, armed with sticks, bricks, and other weapons; they chanted slogans of hate-filled and violent rhetoric. In 2004, all Ahmadi publications were banned, the official reason being that they "hurt or might hurt the sentiments of the majority Muslim population".[24]

Ahmadiyya beliefs mostly mirror those of Islam in general, including belief in the prophethood of Muhammad, reverence for historical prophets, belief in a single creator God (strong monotheism). They accept the Qur'an as their holy text, face the Kaaba during prayer and accept the authority of hadiths (reported sayings of and stories about Muhammad).

Although the central values of Islam (prayer, charity, fasting, etc.) are shared by mainstream and Ahmadi Muslims, distinct Ahmadi beliefs include the following:

Most orthodox Muslims consider both Ahmadi sects to be heretics for a number of reasons, chief among them being the question of finality of prophethood,[54] since they believe members of the Ahmadiyya Muslim Community do not regard the Islamic prophet Muhammad to be the last prophet[55] (the Lahore Ahmadiyya Movement does not subscribe to this belief[56]). Ahmadis claim that this is a result of misinterpreting Mirza Ghulam Ahmad's statements referring to his coming "in the spirit of Muhammed",[56][57] (similar to John the Baptist coming in the spirit and power of Elijah)[58]. Both Ahmadi sects believe Mirza Ghulam Ahmad to be the Mahdi and promised Messiah,[59] while mainstream Muslims refute this claim, they do not believe that Mirza Ghulam Ahmad fulfilled the prophecies about the Promised Messiah and Mahdi and see him as a false prophet. Both Ahmadi groups are considered non-Muslims by the Pakistan government, and have this fact recorded on their travel documents. In contrast Ahmadi citizens from Western countries and other moderate Muslim nations perform Hajj and Umra as the Saudi government is not made aware they are Ahmadis when applying for the visa. A court decision has also upheld the right of Ahmadiyyas to identify themselves as Muslims in India. As the Lahore Ahmadiyya Movementâ€™s view regarding Mirza Ghulam Ahmadâ€™s status as a Prophet is closer to traditional Islamic thought, the Literature published by the Lahore Ahmadiyya Movement has found greater acceptability among the Muslim Intelligentsia.[60][61]

Some mainstream Muslims group both Ahmadi sects together and refer to them as "Qadianis," and their beliefs as "Qadianism"[62] (after the small town of Qadian in the Gurdaspur District of Punjab in India, where the movement's founder was born). However, most, if not all, Ahmadis of both sects dislike this term as it has acquired derogatory connotations over the years and furthermore they prefer to differentiate their two separate movements. Mainstream Muslims will not use the term "Muslim" when referring to Ahmadis, even though both sects refer to themselves as such citing the fatwas given by the Islamic scholars. However, as members of Lahore Ahmadiyya Movement deny the prophethood of Mirza Ghulam Ahmad, some orthodox Islamic Scholars consider the Lahore Ahmadiyya as Muslims.[63] In earlier times in Pakistan and India, there was widespread persecution of Ahmadis by certain Muslim groups. Sporadic violence as well as persecution of a more subtle nature against Ahmadis continues even today.[64]

"At their most extreme religious strategies for dealing with the Christian presence might involve attacking Christian revelation at its heart, as did the Punjabi Muslim, Ghulam Ahmad (d.1908), who founded the Ahmadiyya missionary sect."[65]

Additionally, Abbott Freeland, observed in his book, Islam and Pakistan:

The primary significance of the Ahmadiyya Movement lay in its missionary emphasis. Every Muslim believed that Islam was the only religion free from error. The Ahmadiyas made it part of their principles to show the errors of other religions to their adherents and to proselytize energetically for Islam. In a sense, the Ahmadiyas represent the Muslims emerging, religiously speaking, from the withdrawal that had begun with the arrival of the British, just as the Muslim League represents the political emergence from that same withdrawal. ... It is somewhat ironic that the sect most attacked by Muslims in India and Pakistan has also been that, which has worked hardest, in both its branches, to defend and extend Islam against the competition offered by other faiths."[66]

The Ahmadiyya Movement considers Christian nations (particularly of the developed world) to be the prophesised Dajjal and Gog and Magog, thus making the relationship very hostile. The Ahmadiyya view of the death of Jesus has also been a source of ongoing friction with the Christian Church.

Nevertheless, Ahmadi communities in different parts of the world have been promoting interfaith dialogue with other religious groups in an effort to propagate their ideas and to gain greater exposure to their religious viewpoints.

Only two leaders are recognized by both branches of the sect:

Leaders recognized by the Lahore Ahmadiyya Movement (Lahore Branch), referred to as Emirs: