Abraham Geiger (1810–1874) was a German rabbi and scholar who led in the foundation of Reform Judaism. Disillusioned with Jewish traditionalism, he emphasized that Judaism is an evolving and changing religion and sought to remove its nationalistic elements, particularly the doctrine of the Jews as the chosen people.

Geiger was a gifted child who began early in his intellectual career to question the assumptions of traditional Judaism. After attending the university in Heidelberg and Bonn, he served in the synagogue of Wiesbaden (Germany) and eventually became the chief rabbi of Breslau (Poland).

A prolific writer and researcher as well as an eloquent speaker, Geiger became known as one of the major intellectual and spiritual leaders of the Jewish reform movement, provoking considerable controversy while adopting a more moderate program than several more radical reformers. He was also one of the first to emphasize the Jewishness of Jesus and to envisage Judaism, Christianity, and Islam as three branches of the same monotheistic tree. Always concerned with teaching as well as synagogue life, he ended his career in Berlin, where he helped found the Institute for the Scientific Study of Judaism and taught several courses before his death in 1874.

While Reform Judaism was a broad movement with many leading voices, Geiger is often seen as one of its most important founders.

Born in 1810 in Frankfort am Main, Germany, Abraham Geiger was the son of Rabbi Michael Lazarus Geiger (d. 1823) and Roeschen Wallau (d. 1856). As a mere child of three years, he already showed great intellectual promise, mastering both the Hebrew and German alphabets. He made rapid progress in the Hebrew Bible and is said to have taken up the study of the Mishnah, the seminal Jewish legal text, at four. At six, his father began to teach him the Talmud. When Abraham evidenced boredom with the approach to studies at the local Talmud school, his father home-schooled him until his thirteenth year, during which time young Abraham also acquired a rudimentary knowledge of history, Latin, and Greek. His father died soon after his Bar Mitzvah, on which occasion Abraham delivered, in addition to the traditional Hebrew readings, an address in German, much to the discomfort of some of his pious relatives.

With the support of his older brothers and others, he continued both his Talmudic and secular studies. Even as a child, Geiger doubted the traditional understanding of Judaism when his studies in classical history seemed to contradict the biblical claims of divine authority. At the age of 17 he began writing his first work, an analysis of the legal style of the Mishnah as compared to earlier biblical law and later Talmudic tradition. He also worked on a grammar and glossary of mishnaic Hebrew. 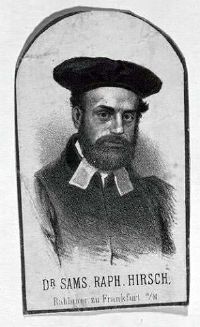 S. R. Hirsch was one of Geiger's friends in his university days, but was later a vehement opponent of Reform Judaism.

Despite the wishes of his family, who had intended him to study theology, Geiger decided in favor of Oriental languages. In the summer of 1829, he entered the University of Heidelberg, where he remained one semester, devoting his time to courses in the classics, while privately mastering Syriac. He also continued working on his grammar and glossary of the Mishnah. The next winter he moved to Bonn to study Arabic. There he met and befriended such men as Samuel Raphael Hirsch, his subsequent colleague and later opponent. His new circle of friends founded an influential society for the practice of Jewish homiletics, where Geiger preached his first sermon on January 2, 1830.

With no professorships open to Jews in Germany, Geiger preached at the synagogue of the town Hanau east of Frankfurt in June 1832, as a candidate for its vacant pulpit, but was not elected. Meanwhile, he had prepared a prize-winning essay on the Jewish elements in the Qur'an, which was later published in German. In this work, Geiger sought to demonstrate Judaism's central influence on both Christianity and Islam, arguing that both religions served to transmit the Jewish monotheistic belief to the pagan world. In November 1832, he was hired to serve as the rabbi of the Jewish community in Wiesbaden, about 24 miles west of Frankfurt. Soon afterward he became engaged to his future wife, Emilie Oppenheim, but their wedding did not take place until seven years later.

While at Wiesbaden, Geiger continued his academic publications, primarily through the scholarly journals he founded and edited. His journals became an important vehicle for publishing Jewish scholarship, chiefly historical and theological studies, as well as a discussion of contemporary events. 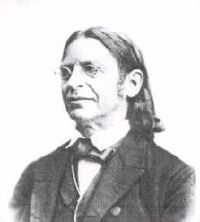 By this time Geiger had already begun his program of religious reforms, chiefly in the synagogue liturgy. For example, he abolished the prayers of mourning for the destroyed Temple of Jerusalem, believing that, as German citizens, such prayers would appear to be disloyal and could spark antisemitism. While still at Wiesbaden, he succeeded in bringing together a number of rabbis in 1837 for the purpose discussing the vital need for the reform of Judaism in the modern era. However, he found Wiesbaden too limited a sphere. In July 1838, he resigned his office and published a program of his further intentions in his essay The Author and the Rabbi.

As one of the positions in the rabbinate of Breslau (Wrocław, Poland) had become vacant, Geiger visited this important center of Jewish activity and was asked to preach on the Sabbath service for July 21, 1838. The sermon became controversial even before it was given as traditionalist opponents attempted to mobilize the state authorities to prevent its delivery. When finally given, it led to his election, pending his naturalization as a Prussian citizen. A heated controversy ensued, lasting 18 months, during which Geiger stayed for the most part in Berlin (September 1838-December 1839). In January 1840, he was finally installed at Breslau.

Opponents led by S. A. Tiktin resorted to various schemes to induce the government to depose Geiger, leading to the publication of formal defenses of Geiger by other reform-minded rabbis. After the death of Tiktin in 1843, Geiger became the city's chief rabbi. However, the conditions in the congregation continued to remain highly contentious until 1849, when two separate congregations were constituted. Geiger's congregation supported his efforts to reconstruct the Jewish ritual on a modern basis. In 1854, his reformed prayer-book was formally adopted.

Despite his reputation as a controversialist in Breslau, Geiger opposed the program of the Frankfurt reform movement, which stirred up German Jewry with its assimilationist vision. He pleaded for a gradual evolution, bringing him into conflict with some of the movement's more radical proponents. As a pastor, he sought reconciliation with the traditionalists, yet in his theories he was consistently the exponent of the radical principles underlying the Reform. Judaism for him was not a given quantity, neither written in stone by God and Moses, nor a national law of the Jews. Rather, it was a process still in flux; tradition itself was the result of this continuous process of growth. The Torah, as well as the Talmud, he insisted, should be studied critically and from the point of view of the historian.

He published studies on the Misnah and other Jewish literature, as well as biographies of Maimonides and Judah Halevi. He wrote on the history of Jewish exegesis, apologetics, and philosophy. He was a faithful contributor to several journals and he gathered around him a number of disciples, to whom he delivered lectures on Hebrew philology, Jewish history, and comparative studies of Judaism and Christianity. 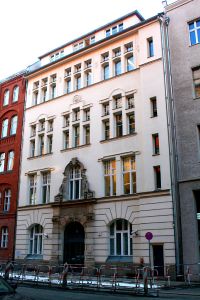 Geiger's Institute for the Scientific Study of Judaism was closed by the Nazi regime in 1942. Since 1950, the building has housed the Central Council of Jews in Germany.

Geiger's greatest work is his epoch-making "Urschrift und Uebersetzungen der Bibel" (Breslau, 1857), which owed its origin to the author's intention to write a history of the Karaites. In this work he examined the controversies between the Sadducees and Pharisees, as well as the early struggle between the Samaritans and the Jews. He also clarified the position of Jesus as a liberal Pharisaic reformer. His research pioneered the modern study of these subjects and did much to correct former misimpressions in both Jewish and Christian scholarship.

Geiger had hoped to be called to the directorship of the Breslau's new Jewish Theological Seminary, to which he had induced the local philanthropist Jonas Fränkel to leave his fortune. This disappointment and the death of his wife in December 1860 may have been the causes of Geiger's return from Breslau to Frankfurt am Main in 1863. However, his hope of finding the means in Frankfurt to realize his project of founding a genuinely scientific Jewish theological faculty was doomed to disappointment. His subsequent Frankfurt lectures on Judaism and its history thus had the character of university extension courses. However, he continued to be a leading voice in the movement of reform. As Reform Judaism began to take clearer shape, Geiger took a prominent part in the rabbinical meetings and synods at Cassel (1868), Leipzig (1869), and Augsburg (1872).

Called to serve the Jewish congregation in Berlin, he preached his inaugural sermon on January 22, 1870. There, he finally found the means to found the Institute for the Scientific Study of Judaism. The opening of this Hochschule in 1872 finally gave him, during the last two years of his life, the opportunity for which he had prayed and pleaded so long. There, he lectured on Biblical Introduction, and Introduction to the Science of Judaism, inspiring his students with his own fervor for truth and research. Death came upon him unexpectedly, long before his intended intellectual work had been finished. 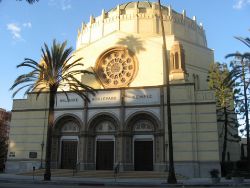 The Wilshire Boulevard Temple in Los Angeles: today, Reform Judaism is the largest Jewish denomination in the United States.

In the Germany of the nineteenth century, Geiger and Samuel Holdheim, along with Israel Jacobson and Leopold Zunz, stood out as the founding fathers of Reform Judaism. Unlike some of the reformers, however, Geiger did not want to create a separate community of "modern" Jews. Rather, his goal was to change traditional Judaism from within. He was more the moderate and scholarly reformer, seeking to transform Judaism through the scientific study of history as applied to the Bible and the Talmud. His most radical proposition was to refrain from assuming that any Jewish text was literally divinely written.

In addition to his intellectual contributions, as the chief rabbi of Breslau, Geiger was largely responsible for much of the reform doctrine of the mid-nineteenth century, contributing significantly to the character to the reform movement that remains today. Indeed, if any one person can be called the founder of Reform Judaism, it is Geiger.

In 1942, the Nazis closed the Hochschule für die Wissenschaft des Judentums in Berlin. However, recently, the Abraham Geiger College became the first liberal rabbinical seminary founded in Continental Europe since the Holocaust with the mission to train rabbis for Jewish communities in Central and Eastern Europe. Much of Geiger's writing has been translated into English from the original German. There have also been many biographical and research texts about him.

This article incorporates text from the Jewish Encyclopedia, a publication now in the public domain.