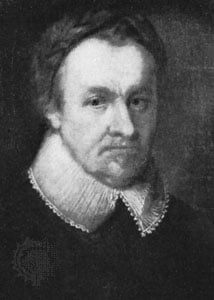 Michael Drayton (1563 – December 23, 1631) was an English poet who came to prominence in the Elizabethan era. He is notable among Elizabethan poets for his particularly baroque and complicated style; although well-received in his time, Drayton's poetry is now considered among the most obscure in the English canon. Nonetheless, he is one of the most technically masterful of Elizabethan poets, and, more importantly, he also introduced a number of techniques which would be of great importance to succeeding generations of writers. Most notably, Drayton is the first English poet to write odes in imitation of Horace. The imitation of Horace would become a genre unto itself in the late seventeenth and early eighteenth centuries, with Drayton largely to thank for Horace's popularity during that time. In addition, Drayton was unusually fond of writing in heroic couplets. Major English poets of the eighteenth century such as John Dryden and Alexander Pope, who wrote almost exclusively in couplets, would cite Drayton as a major influence. Although Drayton's style has largely fallen out of fashion today, he remains an important transitional poet of the Elizabethan and Jacobean eras.

Drayton was born at Hartshill, near Atherstone, Warwickshire. At the age of ten he found a position as a pageboy, and a little later he is thought to have studied at the University of Oxford. Sir Henry Goodere of Polesworth became his patron, and introduced him to the Countess of Bedford, with whom Drayton promptly fell and love and addressed much of his love poetry. For several years Drayton was esquire to Sir Walter Aston. Nothing else is known about his youth, though it has been surmised that he served in the army abroad. In 1590 he seems to have settled in London.

In 1591 he produced his first book, The Harmony of the Church, a volume of spiritual poems. It was notable for a version of the Song of Solomon, executed with considerable richness of expression. However, with the exception of forty copies, seized by the Archbishop of Canterbury, the whole edition was destroyed by public order. Undeterred, Drayton shifted from spiritual poetry to the more fashionable pastoral poetry of his time and published a vast amount within the next few years.

In 1593 appeared Idea: The Shepherd's Garland, a collection of nine pastorals, in which he celebrated his own love-sorrows under the poetic name of Rowland. The basic idea was expanded in a cycle of sixty-four sonnets, published in 1594, under the title of Idea's Mirror. In 1593 appeared the first of Drayton's historical poems, The Legend of Piers Gaveston, and the next year saw the publication of Matilda, an epic poem.

In 1596 Drayton published his long and important poem, Mortimerades, which deals with the Wars of the Roses. It is a very serious production in ottava rima, an Italian verse-form reserved for serious poetry. Drayton later enlarged and modified this poem, and republished it in 1603 under the title of The Barons' Wars. In 1596 also appeared another historical poem, The Legend of Robert, Duke of Normandy, with which Piers Gaveston was reprinted. In 1597 England's Heroical Epistles appeared, a series of historical studies in imitation of those of Ovid. These last poems, written in the rhyming couplets, contain some of the finest passages in Drayton's writings.

By 1597, the poet was resting on his laurels. It seems that he was much favored at the court of Elizabeth, and he hoped that it would be the same with her successor. But when, in 1603, he addressed a poem of compliment to James I, on his accession, it was ridiculed, and his services rudely rejected. His bitterness found expression in a satire, The Owl (1604), but he had no talent in this kind of composition. Not much more entertaining was his scriptural narrative of Moses in a Map of his Miracles, a sort of Biblical epic in couplets printed the same year. In 1605 Drayton reprinted his most important works, his historical poems and the Idea, in a single volume which ran through eight editions during his lifetime. He also collected his smaller pieces, hitherto unedited, in a volume undated, but probably published in 1605, under the title of Poems Lyric and Pastoral; these consisted of odes, ecologues, and a fantastic satire called The Man in the Moon. Some of the odes are extremely spirited, and the volume is largely credited with re-popularizing the Horatian ode in England. In this volume he also printed for the first time the famous Ballad of Agincourt, perhaps Drayton's most popular single poem, which begins thusly:

Fair stood the wind for France,
When we our sails advance,
Nor now to prove our chance,

But putting to the main
At Kaux, the mouth of Seine,
With all his martial train,

Drayton had adopted as early as 1598 the extraordinary resolution of writing a poem celebrating everything of interest in the island of Great Britain, and on this laborious work he was engaged for many years. At last, in 1613, the first part of this vast work was published in eighteen books under the unwieldy title of Poly-Olbion. The success of this great work, which has since become quite famous, was very small at first, and not until 1622 did Drayton succeed in finding a publisher willing to undertake the risk of bringing out twelve more books in a second part. Although the Poly-Olbion has been noted for passages of outstanding brilliance, it is generally agreed that the poem is simply too large to be readable.

In 1627 Drayton published another of his miscellaneous volumes, containing some of his most characteristic and exquisite writing. It consists of the following pieces: The Battle of Agincourt, an historical poem in ottava rima that is not to be confused with his ballad on the same subject; The Miseries of Queen Margaret, written in the same verse and manner; Nimphidia, the Court of Faery, a most joyous and graceful little epic of fairyland; The Quest of Cinthia and The Shepherd's Sirena, two lyrical pastorals; and finally The Moon Calf, a sort of satire. Of these Nimphidia is perhaps the best thing Drayton ever wrote; it is quite a unique example of its kind, full of rare fantastic fancy that would inspire generations of later poets in the genre of fairy-tales.

The last of Drayton's voluminous publications was The Muses' Elizium in 1630. He died in London, was buried in Westminster Abbey, and had a monument placed over him by the Countess of Dorset, with memorial lines attributed to Ben Jonson.

Like other poets of his era, Drayton was active in writing for the theater; but unlike Shakespeare, Ben Jonson, or Samuel Daniel, he invested little of his art in the genre. For a period of only five years, from 1597 to 1602, Drayton was a member of the stable of playwrights who supplied material for the theatrical syndicate of Philip Henslowe. Henslowe's Diary links Drayton's name with 23 plays from that period, and shows that Drayton almost always worked in collaboration with other Henslowe regulars, like Thomas Dekker, Anthony Munday, and Henry Chettle, among others.[1] Of these 23 plays, only one has survived—Part 1 of Sir John Oldcastle—which Drayton composed in collaboration with Munday, Robert Wilson, and Richard Hathwaye. The text of Oldcastle shows no clear signs of Drayton's hand; traits of style consistent through the entire corpus of his poetry (the rich vocabulary of plant names, star names, and other unusual words; the frequent use of original contractional forms, sometimes with double apostrophes, like "th'adult'rers" or "pois'ned'st") are wholly absent from the text, suggesting that his contribution to the collaborative effort was not substantial. William Longsword, the one play that Henslowe's Diary suggests was a solo Drayton effort, was never completed.

Drayton was a friend of some of the most famous men of the age. Ben Jonson, William Browne, George Wither and others were among his friends. There is a tradition that he was a friend of Shakespeare, supported by a statement of John Ward, once vicar of Stratford-on-Avon, that "Shakespear, Drayton and Ben Jonson had a merry meeting, and it seems, drank too hard, for Shakespear died of a feavour there contracted." In one of his poems, an elegy or epistle to Mr Henry Reynolds, he has left some valuable criticisms on poets whom he had known. That he was a restless and discontented, as well as a worthy, man may be gathered from his own admissions. Drayton was also a contemporary of John Donne, though it is not known if Drayton and Donne ever knew each other.

The works of Drayton are bulky, and, in spite of the high place that he holds in critical esteem on the basis of his sheer mastery of the English language, it cannot be pretended that Drayton is much read. For this, according to literary scholars, his ponderous style is much to blame. The Poly-Olbion, the most famous but far from the most successful of his writings, is difficult in the extreme. It was, he tells us, a "Herculean toil" for him to compose, and the reader becomes conscious of the effort. The meter in which it is composed, a couplet of alexandrines, like the French classical measure, is wholly unsuited to the English language, and becomes excessively wearisome to the reader, who forgets the learning and ingenuity of the poet in laboring through the overgrown lines. His historical poems, which he was constantly rewriting and improving, are believed by many to be much more interesting, and often rise to a truer poetic eloquence.

Most literary scholars believe that his pastorals are brilliant, but overladen with color and sweetness to the point of being insipid. He is, with the one magnificent exception of "Since there's no help, come let us kiss and part," which was first printed in 1619, a mediocre sonneteer. The poet with whom it is most natural to compare him is Samuel Daniel; he is more rough and vigorous, more varied and more daring than the latter, but Daniel surpasses him in grace, delicacy and judgment. In their elegies and epistles, however, the two writers frequently resemble each other. Drayton, however, approaches the very first poets of the Elizabethan era in his charming Nimphidia, a poem which inspired Robert Herrick with his sweet fairy fancies and stands as a singular example of its kind in English literature; while some of his odes and lyrics are inspired by noble feeling and virile imagination, and would go on to influence the development of the ode in latter decades of English literature.

In 1748 a folio edition of Drayton's complete works was published under the editorial supervision of William Oldys, and again in 1753 there appeared an issue in four volumes. But these were very unintelligently and inaccurately prepared.

A complete edition of Drayton's works with variant readings was proposed by Richard Hooper in 1876, but was never carried to a conclusion; a volume of selections, edited by A. H. Bullen, appeared in 1883. See especially Oliver Elton, Michael Drayton (1906).

Retrieved from https://www.newworldencyclopedia.org/p/index.php?title=Michael_Drayton&oldid=685725
Categories:
Hidden category:
This page was last edited on 3 April 2008, at 19:54.
Content is available under Creative Commons Attribution/Share-Alike License; additional terms may apply. See Terms of Use for details.