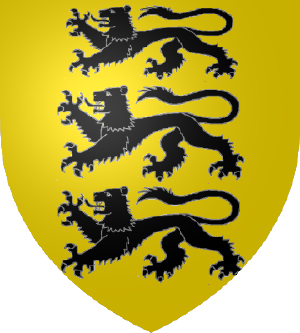 Coat of Arms of the Hohenstaufen Dynasty

The Hohenstaufen (or the Staufer(s)) were a dynasty of Kings of Germany, many of whom were also crowned Holy Roman Emperor and Duke of Swabia. The dynasty can be dated from 1138 until 1266. In 1194, the Hohenstaufen also became Kings of Sicily. The proper name, taken from their castle in Swabia, is Staufen. Therefore, the dynasty is sometimes also called the Swabian dynasty after the family's origin. The Hohenstaufen's gave stability to a substantial region of Europe through a significant period of medieval history. Cities grew in importance and began to replace monasteries as centers of learning, leading to the democratization of knowledge. Despite the weakening of centralized power that followed the death of Frederick II (1250), Germany continued to expand territorially, laying the foundations for its emergence in the nineteenth century as the major continental European power. During World War II, the Waffen-SS named an SS Panzer division Hohenstaufen in honor of this family. Several of the Hohenstaufens were embroiled in rivalry with the Papacy over whether the Pope or the Emperor was superior. As Holy Roman Emperors, the Hohenstaufens were succeeded by the Habsburgs who, over the next six centuries would become, by marriage rather than conquest, rulers of more than half of Europe. 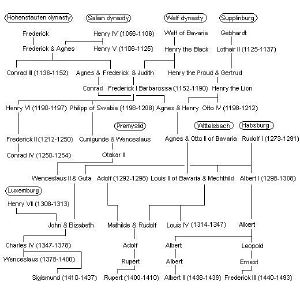 When the last male member of the Salian dynasty, Henry V, Holy Roman Emperor, died without an heir there was controversy about the succession. Frederick and Conrad, the two current male Staufens, were grandsons of Henry IV, Holy Roman Emperor and nephews of Henry V. After the death of the intervening king and emperor Lothair II, in 1137, Conrad, the first Honenstaufen ruler, became Conrad III of Germany.

The second of the Hohenstaufen rulers, Frederick I(r. 1152-90), also known as Frederick Barbarossa because of his red beard, struggled throughout his reign to restore the power and prestige of the German monarchy. Because the German dukes had grown stronger both during and after the Investiture Controversy over who had the authority to appoint people to ecclesiastical benefits (the nobles or the Pope) and because royal access to the resources of the church in Germany was much reduced, Frederick was forced to go to Italy to find the finances needed to restore the king's power in Germany. He was soon crowned emperor in Italy, but decades of warfare on the peninsula yielded scant results and much of his career was spent struggling to assert the supremacy of the Emperor over the authority of the Popes. The papacy and the prosperous city-states of northern Italy were traditional enemies, but the fear of imperial domination caused them to join ranks to fight Frederick. Under the skilled leadership of Pope Alexander III, the alliance suffered many defeats but ultimately was able to deny the emperor a complete victory in Italy. Frederick returned to Germany old and embittered. He had vanquished one notable opponent and member of the Welf family, Saxony's Henry the Lion, but his hopes of restoring the power and prestige of his family and the monarchy seemed unlikely to be met by the end of his life. During Frederick's long stays in Italy, the German princes became stronger and began a successful colonization of Slavic lands. Offers of reduced taxes and manorial duties enticed many Germans to settle in the east as the area's original inhabitants were killed or driven away. Because of this colonization, the empire increased in size and came to include Pomerania, Silesia, Bohemia, and Moravia. A quickening economic life in Germany increased the number of towns and gave them greater importance. It was also during this period that castles and courts replaced monasteries as centers of culture. Growing out of this courtly culture, German medieval literature reached its peak in lyrical love poetry, the Minnesang, and in narrative epic poems such as Tristan, Parzival, and the Nibelungenlied.

Frederick died in 1190, while on a crusade, and was succeeded by his son, Henry VI (r. 1190-97). Elected king even before his father's death, Henry went to Rome to be crowned emperor. A death in his wife's family gave him possession of Sicily, a source of vast wealth. Henry failed to make royal and imperial succession hereditary, but in 1196, he succeeded in gaining a pledge that his infant son Frederick would receive the German crown. Faced with difficulties in Italy and confident that he would realize his wishes in Germany at a later date, Henry returned to the south, where it appeared he might unify the peninsula under the Hohenstaufen name. After a series of military victories, however, he died of natural causes in Sicily, in 1197.

Because the election of the three-year-old Frederick to be German king appeared likely to make orderly rule difficult, the boy's uncle, Philip, was chosen to serve in his place. Other factions elected a Welf candidate, Otto IV, as counterking, and a long civil war began. Philip was about to win when he was murdered by a relative in 1208. Otto IV in turn was beaten by the French at the Battle of Bouvines in 1214. Frederick returned to Germany in 1212 from Sicily, where he had grown up, and became king and Holy Roman Emperor in 1215. As Frederick II (r. 1215-50), he spent little time in Germany because his main concerns lay in Italy, where he wanted to reassert the authority of the Holy Roman Empire. Frederick made significant concessions to the German nobles, such as those put forth in an imperial statute of 1232, which made princes virtually independent rulers within their territories. The clergy also became more powerful. Although Frederick was one of the most energetic, imaginative, and capable rulers of the Middle Ages, he did nothing to draw the disparate forces in Germany together. His legacy was thus that local rulers had more authority after his reign than before it. Although excommunicated, he not only led the 6th Crusade but negotiated the return of Jerusalem to the Crusaders, claiming the title, "king of Jerusalem."

By the time Frederick II died (1250), there was little centralized power in Germany. The Great Interregnum (1256-73), a period of anarchy in which there was no emperor and German princes vied for individual advantage, followed the death of Frederick's son Conrad IV in 1254. In this short period, the German nobility managed to strip many powers away from the already diminished monarchy. Rather than establish sovereign states, however, many nobles tended to look after their families. Their many heirs created more and smaller estates. A largely free class of officials also formed, many of whom eventually acquired hereditary rights to administrative and legal offices. These trends compounded political fragmentation within Germany.

Despite the political chaos of the Hohenstaufen period, the population grew from an estimated 8 million in 1200, to about 14 million in 1300, and the number of towns increased tenfold. The most heavily urbanized areas of Germany were located in the south and the west. Towns often developed a degree of independence, but many were subordinate to local rulers or the emperor. Colonization of the east also continued in the thirteenth century, most notably through the efforts of the Knights of the Teutonic Order, a society of soldier-monks. German merchants also began trading extensively on the Baltic.

Rivalry with the papacy

The reign of Frederick I was marked by rivalry with the papacy. Pope Eugene III refused to confirm his election as Holy Roman Emperor until he swore that he would not make peace with any enemies of the church. He was eventually crowned Emperor by Pope Adrian IV. After the death of Pope Alexander III, he supported the anti-Pope, Victor IV. Alexander had refused to recognize the supremacy of the Emperor, insisting that the Papacy wielded supreme political as well as spiritual power. At the center of the struggle was whether imperial or papal power was to be regarded as "universal." With the papacy of Pope Gregory VIII relationships between Pope and Emperor improved as attention turned away from Europe towards the Holy Land, where the Crusaders were under attack. Fredeick himself took the crusading oath and died en route to Palestine June 10, 1190.

Frederick II, Holy Roman emperor (1212–1250) and king of Sicily (1198–1250) was also embroiled in controversy with the papacy, again on the issue of supremacy and although he led the Sixth Crusade (1228–1229) and was crowned king of Jerusalem (secured by treaty with Al-Kamil of Egypt), he was excommunicated at the time. Frederick enjoyed the support of the Minorites and others, such as the egalitarian Joachimites. The Minorites and Joachimites were among those at the time who advocated poverty, while the Pope rejected the idea that Christ and the apostles had been poor. The term "spirituals" was commonly applied to members of the pro-poverty, anti-wealth lobby. If Christ was poor, how could the wealth and life-style of the Pope, Cardinals, and senior clergy be justified? The Spirituals wanted to see Frederick destroy the temporal power of the papacy.

Members of the Hohenstaufen family 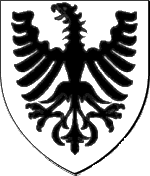 Coat of Arms of the Hohenstaufen Sicily

Like the first ruling Hohenstaufen, Conrad III, also the last one, Conrad IV, was never crowned emperor. After a 20 year period (Interregnum 1254-1273) the first Habsburg was elected king.

Note: Some of the following kings are already listed above as German Kings

Note: Some of the following dukes are already listed above as German Kings

Retrieved from https://www.newworldencyclopedia.org/p/index.php?title=Hohenstaufen&oldid=680295
Categories:
Hidden category:
This page was last edited on 2 April 2008, at 08:49.
Content is available under Creative Commons Attribution/Share-Alike License; additional terms may apply. See Terms of Use for details.