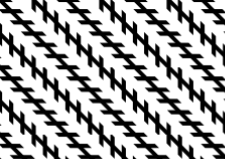 Although the Zollner illusion and other similar illusions have not been completely explained, they has stimulated much valuable research into human perceptual processes. They have also been utilized by artists to bring about entertaining and impressive effects in their works.

The Zöllner illusion is named for German astrophysicist Johann Karl Friedrich Zöllner, who discovered the effect in 1860. Zöllner described his discovery in a letter to physicist and scholar J. C. Poggendorff, editor of Annalen der Physik und Chemie, who, because of Zöllner's letter, discovered the related Poggendorff illusion.

The Zöllner figure is composed of a series of parallel, diagonal lines intersected by a number of short horizontal and vertical bars. The parallel lines appear not to be parallel at all; rather, they appear to converge and diverge from each other.

While the exact mechanisms that cause the Zöllner illusion are not fully understood by scientists, it is possible that the effect can be attributed to the way the brain processes angles. This theory suggests that the brain exaggerates acute angles and underestimates obtuse angles. The brain then adjusts the angles on the transverse lines to create the illusion that the longer lines are slanted. This hypothesis is supported by the fact that the illusion is most powerful at an angle, as perfectly horizontal and vertical lines are more likely to be interpreted correctly.

Interestingly enough, if the colors in the illusion are changed to equal values of green and red, the illusion disappears.

Retrieved from https://www.newworldencyclopedia.org/p/index.php?title=Zollner_illusion&oldid=1044035
Categories:
Hidden category:
This page was last edited on 16 October 2020, at 17:53.
Content is available under Creative Commons Attribution/Share-Alike License; additional terms may apply. See Terms of Use for details.