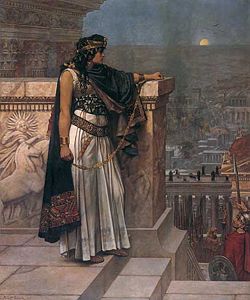 Zenobia (Arabic: زنوبيا) was a Syrian queen (240-after 274 C.E.). After her husband's death, she became a powerful military leader in her own right, conquering both Egypt and much of the Eastern Roman Empire.

The descendant of various royal ancestors, Zenobia became queen of the Palmyrene Empire as the second wife of King Septimius Odaenathus. When he was assassinated, she executed his killer and became the new ruler with her infant son. A woman of broad education, she protected both Jews and "heretics" as queen.

In 269, she challenged Rome by conquering Egypt, defeating the Roman prefect Tenagino Probus. She then proclaimed herself queen of Egypt and conquered parts of Anatolia (modern Turkey), Syria, Palestine, and Lebanon, taking vital trade routes from the Romans. In 274, she was defeated by the forces of the Roman Emperor Aurelian and taken as a hostage to Rome.

Appearing in golden chains in Aurelian’s military triumph parade, Zenobia was freed by the emperor, who granted her an elegant villa in Tibur (modern Tivoli, Italy). She became a prominent philosopher, socialite, and Roman matron. Several notable Romans are counted as her descendants, and she figures prominently in later literature through the present day. 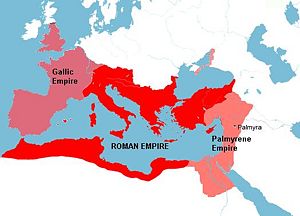 Zenobia was born and raised in Palmyra, Syria. Her father, Zabaii ben Selim, also called Julius Aurelius Zenobius, was a chieftain of Syria, and her mother may have been Egyptian. Her father’s gentilicium, Aurelius, shows that his paternal ancestors probably received Roman citizenship under either Roman Emperor Antoninus Pius (reigned 138-161), Marcus Aurelius (reigned 161-180), or Commodus (reigned 180-192).

Zenobia was born with the name Iulia (Julia) Aurelia Zenobia. Her full name in the Arabic language is al-Zabba' bint Amr ibn Tharab ibn Hasan ibn 'Adhina ibn al-Samida, commonly shortened to Al-Zabba'. In Greek, her name is rendered as Ζηνοβία and in English, she is known either as as Xenobia or Zenobia. After her marriage, she was known as Septimia Zenobia, referring to her husband, Septimius Odaenathus. On official documents, she gave her name as Bat-Zabbai (daughter of Al-Zabba').

She was described as beautiful and intelligent. She had a dark complexion, pearly white teeth, black bright eyes that sparkled, and a beautiful face. Zenobia and her mother were both called Al-Zabba', meaning "the one with long lovely hair." Zenobia possessed a strong, melodic voice and many charms. She was well educated and knew Greek, Aramaic, Egyptian, and Latin. Some sources report that she was also given a Jewish education and may have been in some sense a Jew herself. She was very interested in history and knew the works of Homer, Plato, and other writers from Greece. She also enjoyed hunting animals and drinking. 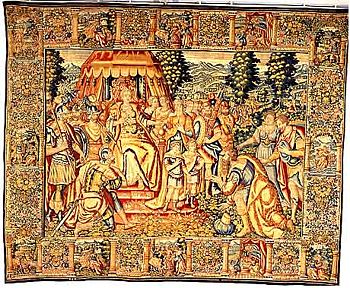 Zenobia married King Septimius Odaenathus of Palmyra in Syria by 258, as his second wife. Originally, a client king under Roman control, Odaenathus had become the de facto ruler of the Eastern provinces of the Roman Empire after the defeat and capture of Emperor Valerian by Shapur I of the Sassanid Empire. Odaenathus’ first marriage had produced a son, Hairan, who became Zenobia's stepson. Around 266, Zenobia and Odaenathus had their own son, Lucius Iulius Aurelius Septimius Vaballathus Athenodorus, known as Vaballathus.

In 267, Odaenathus and Hairan were assassinated by Maeonius, described as either the nephew or cousin of Odaenathus. Zenobia succeeded in having the usurper executed. Since the titled heir, Vaballathus, was only a year old, Zenobia succeeded her husband and ruled Palmyra, bestowing upon herself and her son the honorific titles of Augusta and Augustus.

In 269, Zenobia, her army, and the Palmyrene general Zabdas violently conquered Egypt with help from their Egyptian ally, Timagenes, and his army. The Roman prefect of Egypt, Tenagino Probus, tried to expel them from Egypt, but Zenobia's army captured and beheaded him. She then proclaimed herself queen of Egypt.

In the same year, Zenobia supported the Christian "heretic" Paul of Samosata, the bishop of Antioch, Syria, in his struggle against his opponents. As a result, Paul was able to maintain control of his bishopric as long as Zenobia remained queen. According to the Jerusalem Talmud, she also treated the Jews of Palmyra with favor and protected certain rabbis from persecution (Ter. viii. 46 b).

After her military successes, Zenobia became known as a "Warrior Queen." In leading her army, she displayed significant prowess: she was an able horsewoman and would march several miles with her foot soldiers. 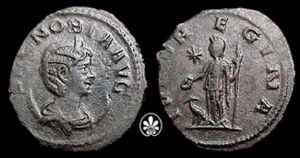 Zenobia coin showing her image, diademed and draped, and giving her title, Augusta, with the obverse showing a standing figure of the goddess, Juno

Zenobia and her large army made expeditions and conquered Anatolia as far as Ancyra (Ankara) and Chalcedon, and then continued on to Syria, Palestine, and Lebanon, taking vital trade routes in these areas from the Romans.

Roman Emperor Aurelian, who was at that time campaigning with his forces in the Gallic Empire, probably did initially recognize the authority of Zenobia and Vaballathus. However this relationship began to degenerate when Aurelian began a military campaign to reunite the Roman Empire in 272-273. Aurelian and his forces thus left Gaul and arrived in Syria. The forces of Aurelian and Zenobia met and fought near Antioch. After a crushing defeat, the remaining Palmyrenes briefly fled into Antioch and into Emesa.

Zenobia was unable to remove her treasury at Emesa before Aurelian successfully besieged and entered the city. Zenobia and her son escaped on camel back with help from the Sassanids, but they were captured on the Euphrates River by Aurelian’s horsemen.

Zenobia’s short-lived Egyptian kingdom and the Palmyrene Empire had ended. The remaining Palmyrenes who refused to surrender were captured by Aurelian and were executed on Aurelian’s orders. Among those killed was Zenobia's chief counselor and Greek sophist, Cassius Longinus.

Zenobia and Vaballathus were taken as hostages to Rome by Aurelian. Vaballathus is presumed to have died on his way to Rome. In 274, Zenobia appeared in golden chains in Aurelian’s military triumph parade in Rome. Aurelian, apparently impressed by her beauty and dignity, freed Zenobia and granted her an elegant villa in Tibur (modern Tivoli, Italy).

She lived the rest of her life in luxury and became a prominent philosopher, socialite, and Roman matron. She later married a Roman governor and senator whose name is unknown. They had several daughters who are also known to have married into Roman noble families. There is a claim that after Aurelian’s defeat, Zenobia committed suicide. However, this is not confirmed and is considered unlikely. Her further descendants are reported to have survived into the fourth century and later. 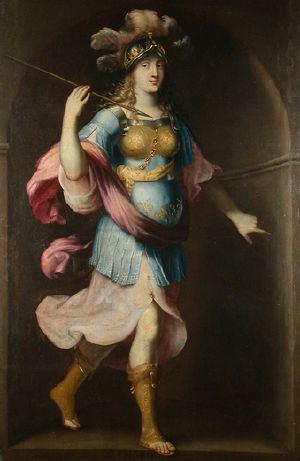 Baroque depiction of Zenobia as the Warrior Queen

Zenobia conquered new territories and increased the Palmyrene Empire in the memory of her husband and as a legacy to her son. Her stated goal was to protect the Eastern Roman Empire from the Sassanid Empire for the peace of Rome. However her efforts significantly increased the power of her throne, and brought her into conflict with Aurelian in the west. During her brief reign, she became perhaps the most powerful woman ever in the Roman Empire.

Prominent Romans are counted as Zenobia's descendants, with evidence of this supported by an inscription found in Rome. One possible descendant of Zenobia is Saint Zenobius of Florence, a Christian bishop who lived in the fifth century.

Zenobia in literature and the theater

Retrieved from https://www.newworldencyclopedia.org/p/index.php?title=Zenobia&oldid=1044014
Categories:
Hidden category:
This page was last edited on 16 October 2020, at 17:20.
Content is available under Creative Commons Attribution/Share-Alike License; additional terms may apply. See Terms of Use for details.