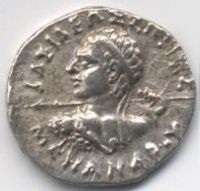 "Yona" is a Pali word used in ancient India to designate Greek speakers. Its equivalent in Sanskrit is the word "Yavana". "Yona" and "Yavana" are both transliterations of the Greek word for "Ionians" (Homer Iāones, older *Iāwones), who were probably the first Greeks to be known in the East.

Several references to the Yonas are found in ancient Indian documents and monuments including the following:

Although the association with eastern Greeks seems to have been quite precise and systematic until the beginning of the first century C.E. (as other foreigners had their own descriptor, such as Sakas, Pahlavas, Kambojas etc.), these terms came to designate more generally "Europeans" and later "foreigners" in the following centuries.

This usage was shared by many of the countries east of Greece, from the Mediterranean to India:

In Indian sources, the usage of the words "Yona," "Yauna," "Yonaka," "Yavana" or "Javana," etc. appears repeatedly, and particularly in relation to the Greek kingdoms that neighbored, or sometimes occupied, the Indian north-western territories over a period of several centuries from the fourth century B.C.E. to the first century C.E., such as the Seleucid Empire, the Greco-Bactrian kingdom and the Indo-Greek kingdom.

After Alexander's invasion, the Greek settlements had existed in eastern parts of the Achaemenid empire, north-west of India, as neighbors to the Iranian Kambojas. The references to the Yonas in the early Buddhist texts may be related to the same.

Some of the better known examples are those of the Edicts of Ashoka (c. 250 B.C.E.), in which the Buddhist emperor Ashoka refers to the Greek populations under his rule. Rock Edicts V and XIII mention the Yonas (or the Greeks) along with the Kambojas and Gandharas as a subject people forming a frontier region of his empire and attest that he sent envoys to the Greek rulers in the West as far as the Mediterranean, faultlessly naming them one by one. In the Gandhari original of Rock XIII, the Greek kings to the West are associated unambiguously with the term "Yona": Antiochus is referred as "Amtiyoko nama Yona-raja" (lit. "The Greek king by the name of Antiochus"), beyond whom live the four other kings: "param ca tena Atiyokena cature rajani Turamaye nama Amtikini nama Maka nama Alikasudaro nama" (lit. "And beyond Antiochus, four kings by the name of Ptolemy, the name of Antigonos, the name of Magas, the name Alexander").

Other Buddhist texts such as the Dipavamsa and the Sasanavamsa reveal that after the Third Buddhist Council, the elder (thera) Mahárakkhita was sent to the Yona country and he preached Dharma among the Yonas and the Kambojas, and that at the same time the Yona elder (thera) Dharmaraksita was sent to the country of Aparantaka in western India. Ashoka's Rock Edict XIII also pairs the Yonas with the Kambojas (Yonakambojesu) and conveys that the Brahmanas and Sramanas are found everywhere in his empire except in the lands of the Yonas and the Kambojas.

The Mahavamsa or "Great Chronicle" of Sri Lanka refers to the thera Mahárakkhita being sent to preach to the Yona country, and also to the Yona thera Dhammarakkhita, who was sent to Aparanta (the "Western Ends").[1] It also mentions that king Pandukabhaya set aside a part of the city of Anuradhapura for the Yonas.[2] Another Yona thera, Mahádhammarakkhita, is mentioned as having come from Alexandria in the country of the Yonas, to be present at the building of the Ruwanweliseya.[3]

Another example is that of the Milinda Panha (Chapter I)[4], where "Yonaka" is used to refer to the great Indo-Greek king Menander (160 B.C.E.–135 B.C.E.), and to the guard of "five hundred Greeks" that constantly accompanies him.

The Vanaparava of Mahabharata contains verses in the form of prophecy complaining that "… Mlechha (barbaric) kings of the Shakas, Yavanas, Kambojas, Bahlikas etc. shall rule the earth (i.e India) un-righteously in Kaliyuga…".[5] This reference apparently alludes to chaotic political scenario following the collapse of Mauryan and Sunga dynasties in northern India and its subsequent occupation by foreign hordes of the Yavanas, Kambojas, Sakas and Pahlavas, etc.

There are important references to the warring Mleccha hordes of the Shakas, Yavanas, Kambojas, Pahlavas, etc. in the Bala Kanda of the Valmiki Ramayana.[6]

Indologists like Dr. Hemchandra C. Raychadhury, Dr. Bimala Churn Law, Dr. Satya Shrava, and others, see in these verses the clear glimpses of the struggles of the Hindus with the mixed invading hordes of the barbaric Sakas, Yavanas, Kambojas, Pahlavas, etc. from north-west.[7] The time frame for these struggles is second century B.C.E. downwards. Dr. Raychadhury fixes the date of the present version of the Valmiki Ramayana around/after second century C.E.[8]

The other Indian records describe the 180 B.C.E. Yavana attacks on Saketa, Panchala, Mathura and Pataliputra, probably against the Sunga empire, and possibly in defense of Buddhism. The main mentions of the invasion are those by Patanjali around 150 B.C.E., and of the Yuga Purana, which, like the Mahabharata, also describe Indian historical events in the form of a prophecy:

"After having conquered Saketa, the country of the Panchala and the Mathuras, the Yavanas, wicked and valiant, will reach Kusumadhvaja ("The town of the flower-standard," Pataliputra). The thick mud-fortifications at Pataliputra being reached, all the provinces will be in disorder, without doubt. Ultimately, a great battle will follow, with tree-like engines (siege engines)."[9]

'"The Yavanas (Greeks) will command, the Kings will disappear. (But ultimately) the Yavanas, intoxicated with fighting, will not stay in Madhadesa (the Middle Country); there will be undoubtedly a civil war among them, arising in their own country (Bactria), there will be a terrible and ferocious war."'[10]

The Anushasanaparava of Mahabharata affirms that the country of Mathura, the heartland of India, was under the joint military control of the Yavanas and the Kambojas.[11]

From the references noted above, it appears certain that the Yavana invasion of Majjhimadesa (Mid India) was jointly carried out by the Yavanas and the Kambojas. The Greek Yavanas were apparently a minority foreigners in India and naturally may have obtained, in this invasion, the military support of their good neighbors, the warlike Kambojas. The evidence from the Mathura Lion Capital inscriptions of Saka great Satrap (Mahakshatrapa) Rajuvula also lends strong credibility to this view.

The Mid India invasion was followed by almost two centuries of Yavana rule which in the light of evidence presented above, appears to have been a joint Yavana-Kamboja rule.

Several references in Indian literature praise the knowledge of the Yavanas or the Greeks.

The Mahabharata compliments them as "the all-knowing Yavanas" (sarvajnaa yavanaa):

"The Yavanas, O king, are all-knowing; the Suras are particularly so. The mlecchas are wedded to the creations of their own fancy."[12] They are also credited as the creators of flying machines that are generally called vimanas.[13]

The "Brihat-Samhita" of the mathematician Varahamihira says: "The Greeks, though impure, must be honored since they were trained in sciences and therein, excelled others…".[14]

Yet another Indian text, the Gargi-Samhita, also similarly compliments the Yavanas saying: "The Yavanas are barbarians yet the science of astronomy originated with them and for this they must be revered like Gods".[15]

On the 110 B.C.E. Heliodorus pillar in Vidisha in Central India, the Indo-Greek king Antialcidas, who had sent an ambassador to the court of the Sunga king Bhagabhadra, was also qualified as "Yona."

The Mahavamsa also attests to a Yona settlement in Anuradhapura in ancient Sri Lanka, probably contributing to trade between East and West.

Buddhist texts like the Sumangala Vilasini class the language of the Yavanas with the Milakkhabhasa (i.e impure language).

The Yonas and other northwestern invaders in Indian literature

The Yavanas or Yonas are frequently found listed with the Kambojas, Sakas, Pahlavas and other northwestern tribes in numerous ancient Indian texts.

The Mahabharata groups the Yavanas with the Kambojas and the Chinas and calls them "Mlechchas" (Barbarians). In the Shanti Parava section, the Yavanas are grouped with the Kambojas, Kiratas, Sakas, and the Pahlavas, etc. and are spoken of as living the life of Dasyus (slaves). In another chapter of the same Parava, the Yaunas, Kambojas, Gandharas etc. are spoken of as equal to the "Svapakas" and the "Grddhras."

The Balakanda of Ramayana also groups the Yavanas with the Kambojas, Sakas, Pahlavas, etc. and refers to them as the military allies of sage Vishistha against Vedic king Vishwamitra.[17] The Kishkindha Kanda of Ramayana locates the Sakas, Kambojas, Yavanas and Paradas in the extreme north-west beyond the Himavat (i.e. Hindukush).[18]

The Buddhist drama Mudrarakshasa by Visakhadutta as well as the Jaina work, Parisishtaparvan refer to Chandragupta's alliance with Himalayan king Parvatka. This Himalayan alliance gave Chandragupta a powerful composite army made up of the frontier martial tribes of the Shakas, Kambojas, Yavanas, Parasikas, Bahlikas, etc.[19] which he utilized to defeat the Greek successors of Alexander the Great and the Nanda rulers of Magadha, and thus establishing his Mauryan Empire in northern India.

The Assalayana Sutta of Majjhima Nikaya attests that in Yona and Kamboja nations, there were only two classes of people… Aryas and Dasas… (the masters and slaves), and that the Arya could become Dasa and vice versa. The Vishnu Purana also indicates that the "chatur-varna" or four=class social system was absent in the lands of Kiratas in the East and the Yavanas and Kambojas, etc. in the West.

Numerous Puranic literature groups the Yavanas with the Sakas, Kambojas, Pahlavas and Paradas and refers to the peculiar hair styles of these people which were different from those of the Hindus. Ganapatha on Panini attests that it was a practice among the Yavanas and the Kambojas to wear short-cropped hair (Kamboja-mundah Yavana-mundah).

Vartika of Katayayana informs us that the kings of the Shakas and the Yavanas, like those of the Kambojas, may also be addressed by their respective tribal names.

Brihat-Katha-Manjari of Kshmendra [24] informs us that king Vikramaditya had unburdened the sacred earth of the Barbarians like the Shakas, Kambojas, Yavanas, Tusharas, Parasikas, Hunas etc. by annihilating these sinners completely.

The Brahmanda Purana[25] refers to the horses born in Yavana country.

The Mahaniddesa[26] speaks of Yona and Parama Yona, probably referring to Arachosia as the Yona and Bactria as the Parama Yona.

The terms "Yona," "Yonaka" or "Yavana" later took on a wider meaning of Mlechchas (Barbarians) and a designation to all foreign tribes or the westerners visiting India.[27] Indian languages did not address the difference based on religion early on, but after the arrival of Islam to the subcontinent, more than Mussalaman or Muslim, appellation Yavana along with Turuka, Turuska, Tajik, and Arab came to be used for invaders professing Islam as their religion.[28]