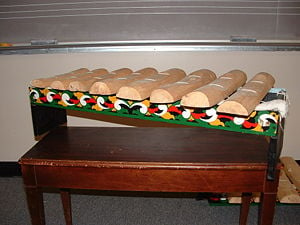 Kulintang a Kayo, a Philippine xylophone

The xylophone (from the Greek meaning 'wooden sound') is a musical instrument in the percussion family which probably originated in Indonesia.[1] It consists of wooden bars of various lengths that are struck by plastic, wooden, or rubber mallets. Each bar is tuned to a specific pitch of the musical scale. Xylophone can refer to western style concert xylophones or to one of the many wooden mallet percussion instruments found around the world. Xylophones are tuned to different scale systems depending on their origin, including pentatonic, heptatonic, diatonic, or chromatic. The arrangement of the bars is generally from low (longer bars) to high (shorter bars). 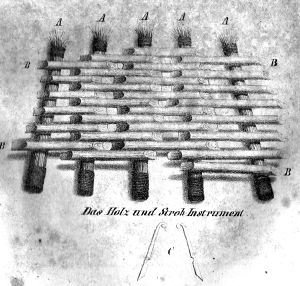 The xylophone is believed to have originated in southeastern Asia. Models were developed in western and eastern Africa. It is likely that the xylophone reached Europe during the Crusades and the earliest historical reference in Europe is in sixteenth Century Germany in organist Arnold Schlick's Spiegel der Orgelmacher und Organisten.[2] The earliest known model was from the ninth Century in southeast Asia (However, a model of a hanging wood instrument dated to ca. 2000 B.C.E. in China.)[2]

The xylophone, which had been known in Europe since the Middle Ages, was by the nineteenth Century associated largely with the folk music of Eastern Europe, notably Poland and Eastern Germany. By 1830, the xylophone had been popularized to some extent by a Russian virtuoso named Michael Josef Gusikov,[3] who through extensive tours had made the instrument known. His instrument was the five-row “continental style” xylophone made of 28 crude wooden bars, arranged in semi-tones in the form of a trapezoid, and resting on straw supports. It was sometimes called the “strohfiedel” or “straw fiddle.” There were no resonators and it was played with spoon shaped sticks. According to musicologist, Curt Sachs, Gusikov performed in garden concerts, variety shows, and as a novelty at symphony concerts. Certainly in the 1830s a xylophone solo was a novelty. Noted musicians, including Felix Mendelssohn, Frederic Chopin, and Franz Liszt spoke very highly of Gusikov’s performances. Perhaps due to his great influence, xylophonists continued to be featured in theater shows and concert halls until well into the twentieth century.

The xylophone is a precursor to the vibraphone, which was developed in the 1920s.

Ferdinand Kauer (1751-1831) and Paul Wranitzky were some of the first composers to introduce the xylophone into Western classical music.

Camille Saint-Saens first used the xylophone in a symphonic composition, "Danse Macabre," in 1874. “Fossils” in Carnival of the Animals (1886) would use the same part (except that it is in 2/4 rather than 3/4). The xylophone was utilized to emulate the sounds of bones rattling.

At the end of World War I, there was a sudden craze for dancing, and as dance halls appeared everywhere, there arose a demand for music with a danceable beat. Both George Hamilton Green and Joe Green were involved in recording during this period of 1918-1925, and their xylophone playing and drumming would be heard in the waltzes, one-steps, two-steps, and Fox-trots of a number of top recording bands. The rising popularity of ragtime music defined the xylophone by style, heritage, and character that lasted beyond the “golden age.” The overture of George Gershwin's 1935 opera Porgy and Bess, for example, features a prominent xylophone part that bears the influence of the xylophone’s American ragtime and novelty music tradition.

The modern western-style xylophone has bars made of rosewood or more commonly, kelon, an extremely durable fiberglass that allows a louder sound at the expense of tone quality. Some xylophones can be as small as 2 1/2 octaves but concert xylophones are typically 3 1/2 or four octaves.

Concert xylophones have resonators below the bars to enhance the tone and sustain. Frames are made of wood or cheap steel tubing; more expensive xylophones feature height adjustment and more stability in the stand.

In other music cultures, xylophones have wooden bars and a wooden frame. Some versions have resonators made of gourds.

Western-style xylophones are characterized by a bright, sharp tone and high register. Modern xylophones include resonating tubes below the bars. A xylophone with a range extending downwards into the marimba range is called a xylorimba.

Other instruments which are similar to the xylophone with a row of bars graduated in length and performed by being struck with mallets are the glockenspiel (a portable instrument with tuned metal bars which are struck with small hammers), vibraphone (a marimba with a pulsating sound created by valves in the resonators), lamellophone (instrument with a series of narrow plates or 'tongues' which are fixed at one end and free on the other so that the performer can depress the free end and let it vibrate), marimba (xylophone type instrument with resonators below each tuned bar), lithophone (tuned stones), mbila (African xylophone), matallophone (Indonesian xylophone with tuned metal bars struck with mallets), and the balafon (Gabonese folk xylophone).

Retrieved from https://www.newworldencyclopedia.org/p/index.php?title=Xylophone&oldid=1021004
Categories:
Hidden category:
This page was last edited on 17 June 2019, at 22:43.
Content is available under Creative Commons Attribution/Share-Alike License; additional terms may apply. See Terms of Use for details.