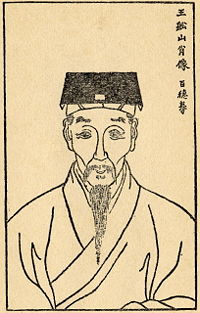 Wang Fu-chih (王夫之) or Wang Fuzhi or Chuanshan (船山 Ch’uan-shan), also known as Wang Fu-zi or Wang Zi (1619 - 1692) was a Chinese philosopher of the late Ming and early Ch'ing dynasties. Born to a scholarly family he began his education in the Chinese classics at a very early age and succeeded in the civil service examination which would have guaranteed him a career in government. His plans were disrupted by the Manchu invasion of China. Wang raised an army and fought for several years with the Ming resistance; in 1650 he gave up and returned to his native village, where he spent the rest of his life in scholarship. Wang Fu-zi wrote over one hundred works on history, literature and philosophy.

Like other great thinkers of the transition era between the Ming and Ch’ing dynasties, Wang Fu-chi was critical of the idealism and intuitiveness advocated by earlier neo-Confucian thinkers such as Wang Yang-Ming (1472–1529), and sought a more practical and realistic system of philosophy. He maintained all reality consisted of "ch'i" (energy or material force). Heaven was nothing more than the totality of all objects which existed, and the Confucian principle of “li” (idea, form) was simply a principle of ch’i. Wang's naturalist moral philosophy acknowledged desire as an essential part of human nature and declared that virtues and values are assigned to objects and actions by human beings and not by Heaven. His political ideas were practical and concentrated on the present rather than the past. Government, he argued, should benefit the people, not those in power. Wang Fu-zi’s works were revived by Chinese nationalists during the nineteenth century and continues to be popular in modern China. Wang Fu-zi is regarded as one of the most sophisticated original minds in the history of Confucian thought.

Wang Fu-chi was born to a scholarly family in Hengyang in Hunan province in 1619. His father was a scholar who had spent several years at the Imperial Academy in Peking, and Wang fu-chih began his education in the Chinese classic texts at the early age of four, together with his brother. It is said that he read The Thirteen Classics when he was only seven–years–old, and that he was able to read ten times faster than anyone else. He passed his civil-service examination at the age of twenty-four, but his projected career was diverted by the invasion of China by the Manchus, the founders of the Qing (or Ch'ing) dynasty. Wang bitterly opposed the Manchu invasion of China. He raised an army and joined the resistance led by the remaining leaders of the Ming dynasty, but by 1650 it was obvious that his cause was hopeless. The next year he returned to his native village at the foot of the mountain Ch'uan-shan, for which he is also named, and devoted the rest of his life to study, producing works on history, literature and philosophy. He died in 1693.

Wang fu-zi is said to have written over a hundred books, but many of them have been lost; the remainder are collected as the Ch’uan-shan i-shu ch’uan-chi. Wang was a follower of Confucius, but he believed that the neo-Confucian philosophy which dominated China at the time had distorted Confucius's teachings. Like other great thinkers of the transition era between the Ming and Ch’ing dynasties, Wang Fu-chich was critical of the idealism and intuitiveness advocated by Wang Yang-ming (1472–1529), the most influential Confucian thinker after Chu Hsi, and sought a more practical system of philosophy. Wang fu-zi wrote his own commentaries on the Confucian classics (including five on the Yi Jing or Book of Changes), and gradually developed his own philosophical system. He wrote on many topics, including metaphysics, epistemology, moral philosophy, poetry, and politics. His best-known studies are the Tu t'ung-chien lun (“Commentary on Reading the Comprehensive Mirror” of Ssu-ma Kuang) and the Sung lun (“Commentary on the Sung”), in which he clearly demonstrated that the institutions of ancient China, sanctified in the Confucian Classics, differed widely from the institutions of the Chinese dynasties that followed the feudal period in which those classics were written. Apart from Confucius, his influences included Zhang Zai and the major early neo-Confucian Zhu Xi.

Wang Fu-chi’s works were revived by Chinese nationalists during the middle of the nineteenth century and continue to be popular in modern China, mostly because of his political and historical writings, but also because of his materialism. He is regarded as one of the most sophisticated original minds in the history of Confucian thought.

Wang’s metaphysical approach is best thought of as a type of materialism. Wang maintained that only qi (or ch'i; energy or material force) existed. There were two kinds of ch’i, yin and yang, which were in constant fluctuation and competition with each other. Yin and yang always coexisted and nothing could ever be said to be pure yin or pure yang. He explained that what the Book of Changes (I Ching) called the pure yang and pure yin, the hexagram of Ch'ien and the hexagram of K'un, were the mixture of six prominent yang with six hidden yin, and the mixture of six prominent yin with six hidden yang. Every material object existed as a composite of yin and yang. There was no world beyond perceived reality, no Heaven or greater principle directing the design of the universe. Heaven was nothing more than the totality of all objects which existed. Li (principle, form, or idea), which was a central concept in traditional Confucian thought, did not exist independently, but was simply a principle of ch’i, which had always existed.

As ch’i had always existed, so had the whole universe always existed. Yin and yang were in constant motion, but the totality of ch’i remained constant . "If one rises, the other falls. They constantly seek each other: yin must seek yang and yang must seek yin" (Zheng-Meng, 37). When one form of ch’i expanded, the other form contracted. This constant cyclical rotation was what Wang Fu-chi defined as the Principle of Heaven, or “li.”

Wang's metaphysical ideas led him to a naturalist moral philosophy; virtues and values are assigned to objects and actions by human beings. Human desires are not inherently evil (as maintained by the Buddhists); they are an unavoidable, essential part of human nature, and can be beneficial because the moral nature of human beings is grounded in feelings for others. Evil arises because of a lack of moderation in satisfying desires. Human desires comprise the main example of the relationship between humans as material beings and the material world in which they live. Human nature is in part a function of the material nature with which a person is born, and undergoes changes as a result of interactions with the world.

Wang strongly emphasized the need for both experience and reason: in order to acquire knowledge it was necessary to study the world using the senses, and to reason carefully about it. Knowledge and action were intertwined, and action was the foundation of knowledge. The acquisition of knowledge was a slow and gradual process; there were no sudden flashes of enlightenment. Since Heaven had no hidden dimension, there was nothing about reality that human beings could not eventually comprehend. The more a person learned about nature, the more he could understand the Heavenly Principle.

Wang rejected the Confucian notion of a golden age in the past which should be emulated. Government, he argued, should benefit the people, not those in power. History was a continuous cycle of renewal, involving the gradual but steady progress of human society. There were periods of chaos and want as well as of stability and prosperity, depending on the degree of virtue of the emperor and of the people as a whole, but the underlying direction was upwards. This progress was not a result of fate or destiny, but of the natural laws that govern human beings and society.

The ultimate aim of the government should be the preservation of the Chinese people and their culture. Ethics were important only if they first served to preserve the race. Alien rulers were not permissible, no matter how completely they adapted to Chinese culture. Wang glorified past heroes who fought to save Chinese land from encroachment by various Central Asian barbarians. In practical politics, Wang believed that the power of the landlords was an evil, and should be weakened by means of higher taxation, which would also lead to an increase in numbers of land-owning peasants.