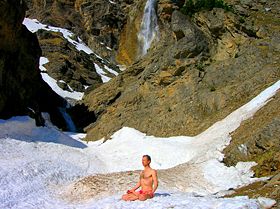 Tummo (Tibetan: gtum-mo) is a meditative practice found in both Tibetan Buddhism and Bön, which produces "inner heat" through the alleged cultivation of body energy-channels. Considered to be an advanced spiritual practice, and one of the six yogas of Naropa, this religious discipline has generated much interest among the scientific community since tests have confirmed that Buddhist monks are able to generate elevated levels of body heat for prolonged periods of time when exposed to freezing temperatures.

Tummo allegedly produces intense sensations of inner heat that are held to be a partial effect of the practice of the meditation practice. Stories and eyewitness accounts abound of yogi practitioners being able to generate sufficient heat to evaporate wet sheets draped around their naked bodies while sitting outside in the freezing cold. These observations have also been discussed in medical articles (see below).

While the physiological effects of Tummo are well known, they are not the primary purpose of the meditation practice. Tummo is a tantric meditation practice that transforms and evolves the consciousness of the practitioner so that wisdom and compassion are manifested in the individual.

Tummo is generally described within the context of various Buddhist tantric systems, particularly the Mother tantras, and most widely taught within the Kagyu lineages. However, a popular manual was written by Je Tsongkhapa, founder of the strictly monastic Gelug sect. The context for the practice is rooted in the Mahayana precepts of universal compassion and the experience of the transcendental wisdom of Sunyata (Emptiness). The Buddhist tantric systems present several different models of the chakras, and for tummo the energetic winds are being accumulated at the navel chakra, four fingers below the navel.[1][2] In Tibetan Buddhism, the primary purpose of tummo is to gain control over subtle body processes as a foundation for very advanced mystical practices analogous to completion stages of highest yoga tantra Anuttarayoga Tantra. Such refined internalized yogas are practiced to support entry into the highest contemplative systems, for example the Dzogchen or Mahamudra systems.[3]

Tummo is a Tibetan word, literally meaning fierce [woman] or, generally, inner fire.[5] The terms drod and tummo are synonymous though the former is used in Traditional Tibetan medicine, whilst the latter is employed in tantric spiritual disciplines. The Sanskrit terms caṇḍalī and kuṇḍalinī are clearly etymologically related.

Kundalini is etymologically linked to candalī, the Sanskrit term for tummo, or inner fire. The two practices are also related. Miranda Shaw clarifies:

Kuṇḍalinī-yoga offered a range of techniques to harness the powerful psycho-physical energy coursing through the body... Most people simply allow the energy to churn in a cauldron of chaotic thoughts and emotions or dissipate the energy in a superficial pursuit of pleasure, but a yogi or yogini consciously accumulates and then directs it for specified purposes. This energy generates warmth as it accumulates and becomes an inner fire or inner heat (candālī) that [potentially] burns away the dross of ignorance and ego-clinging.[6]

Kundalini, therefore, is the energy that when accumulated and directed can become tummo. The two are essentially similar in nature but applied in somewhat different ways in the Hindu Kundalini Yoga practice and the Vajrayana Buddhist tummo practices, such as the Six Yogas of Naropa.

Numerous non-Buddhist tantras of the Shakta and Shaiva traditions (generally termed Hindu by westerners) speak of Kundalini, which is generally described as a coiled energy at the base of the spine,[7][8][9] at the first chakra. The image of celestial partnership is common within the Shiva-Shakti treatment of Kundalini union. As the serpent energy, or "shakti," ascends to the Crown chakra, Shiva, the cosmic consciousness permeates the body-mind of the sadhaka. It is important to remember that the language of directionality encoded within this process is only metaphorical and that the higher awareness states are typically nonlocal, unbounded and uncontained.

Dr. Arya (2006) describes the raising of drod or tummo through the tsa lung vortices (Tibetan: khorlo; Sanskrit: chakra) in a manner comparable to the "serpent fire" (Sanskrit: kuṇḍalinī; caṇḍalī) and mentions Vajrayogini and bodymind making reference to English renderings of marigpa, sahasrara and Traditional Tibetan medicine:

"The psychic heat Drod is produced by the space particles and the heat manifested from the friction of the wind element. This is another fundamental element as it supports and gives power to the consciousness, like the power of the fire that can launch rockets to space. The power is called medrod or 'digestion fire' in medicine and Tummo in yoga tantra. The heat (fire) sustains life and protects the body/mind. The psychic fire increases the wisdom, burns the ignorant mind of the brain and gives realization and liberation from the darkness of unawareness. That is why yoga describes Tummo as the aggressive fire which ignites from below navel, pierces the chakras one by one and reaches the sky of the crown chakra. The tummo burning arrow married with the celestial bride leads to enjoy the life of transformation of samsara. They give birth to the son of awareness from the blissful garden of Vajrayogini."[11]

Tummo is taught currently in both Asia and the West by a few qualified Tibetan lamas, typically to students who have mastered other preliminary meditation practices. There are also several books published in English in the 20th century that described the practices with mistakes of translation. Current texts such as those by Lama Yeshe or Glenn Mullin are highly accurate and go into some detail.

In January, 2008, Wim Hof of Holland set a world record[12] for exposure to ice. Wim Hof is a self-described Tummo master who set a world record by spending one hour and 13 minutes in a tub of ice wearing minimal clothing. He hopes to beat his own record, and is training to do so currently.[13]

An attempt to study the physiological effects of Tummo has been made by Benson and colleagues (Benson et al., 1982; Cromie, 2002) who studied Indo-Tibetan Yogis in the Himalayas and in India in the 1980s. In the first experiment, in Upper Dharamsala (India), Benson et al. (1982) found that these subjects exhibited the capacity to increase the temperature of their fingers and toes by as much as 8.3°C. In the most recent experiment, which was conducted in Normandy (France), two monks from the Buddhist tradition wore sensors that recorded changes in heat production and metabolism (Cromie, 2002).

Retrieved from https://www.newworldencyclopedia.org/p/index.php?title=Tummo&oldid=992933
Categories:
Hidden category:
This page was last edited on 21 December 2015, at 19:53.
Content is available under Creative Commons Attribution/Share-Alike License; additional terms may apply. See Terms of Use for details.