Thutmose II (sometimes read as Thutmosis, or Tuthmosis II and meaning Thoth is Born) was the fourth Pharaoh of the Eighteenth dynasty of Egypt. He built some minor monuments and initiated at least two minor campaigns but did little else during his rule and was probably strongly influenced by his wife, Hatshepsut. His reign is generally dated from 1493 to 1479 B.C.E. Thutmose II's body was found in the Deir el-Bahri Cache above the Mortuary Temple of Hatshepsut and can be viewed today in the Egyptian Museum in Cairo.

Thutmose II was the son of Thutmose I and a secondary wife, Mutnofret. He was a lesser son of Thutmose I and chose to marry his fully royal half-sister, Hatshepsut, in order to secure his kingship. While he successfully put down rebellions in Nubia and the Levant and defeated a group of nomadic Bedouins, these campaigns were specifically carried out by the King's generals, and not by Thutmose II himself. This is often interpreted as evidence that Thutmose II was still a minor at his accession. Thutmose II fathered Neferure with Hatshepsut, but also managed to father a male heir, the famous Thutmose III, by a lesser wife named Iset before his death.

Some archaeologists believe that Hatshepsut was the real power behind the throne during Thutmose II’s rule because of the similar domestic and foreign policies which were later pursued under her reign, and because of her claim that she was her father’s intended heir. She is depicted in several raised relief scenes from a Karnak gateway dating to Thutmose II's reign both together with her husband and alone.[1] She later had herself crowned Pharaoh several years into the rule of her husband's young successor Thutmose III; this is confirmed by the fact that "the queen's agents actually replaced the boy king's name in a few places with her own cartouches" on the gateway.[2]

Dates and length of reign

Manetho's Epitome refers to Thutmose II as "Chebron" (which is a reference to his prenomen, Aakheperenre) and gives him a reign of 13 years, but this figure is highly disputed among scholars. The reign length of Thutmose II has been a controversial and much debated topic among Egyptologists with little consensus given the small number of surviving documents for his reign, but a 13-year reign is preferred by older scholars while newer scholars prefer a shorter 3-4 year reign for this king due to the minimal amount of scarabs and monuments attested under Thutmose II. It is still possible to estimate when Thutmose II's reign would have begun by means of a heliacal rise of Sothis in Amenhotep I's reign, which would give him a reign from 1493 B.C.E. to 1479 B.C.E.,[3] although uncertainty about how to interpret the rise also permits a date from 1513 B.C.E. to 1499 B.C.E.,[4] and uncertainty about how long Thutmose I ruled could also potentially place his reign several years earlier still. Nonetheless, scholars generally assign him a reign from 1493 or 1492 to 1479.[5][6]

Argument for a short reign

Ineni, who was already aged by the start of Thutmose II's reign, lived through this ruler's entire reign into that of Hatshepsut.[7] In addition, Thutmose II is poorly attested in the monumental record and in the contemporary tomb autobiographies of New Kingdom officials. A clear count of monuments from his rule, which is the principal tool for estimating a king's reign when dated documents are not available, is nearly impossible because Hatshepsut usurped most of his monuments, and Thutmose III in turn reinscribed Thutmose II's name indiscriminately over other monuments.[8] However, apart from several surviving blocks of buildings erected by the king at Semna, Kumma and Elephantine, Thutmose II's only major monument consists of a limestone gateway at Karnak that once lay at the front of the Fourth Pylon's forecourt. Even this monument was not completed in Thutmose II's reign but in the reign of his son Thutmose III which hints at "the nearly ephemeral nature of Thutmose II's reign."[9] The gateway was later dismantled and its building blocks incorporated into the foundation of the Third Pylon by Amenhotep III.[10] In 1987, Luc Gabolde published an important study which statistically compared the number of surviving scarabs found under Thutmose I, Thutmose II and Hatshepsut.[11] While monuments can be usurped, scarabs are so small and comparatively insignificant that altering their names would be impractical and without profit; hence, they provide a far better insight into this period. Hatshepsut's reign is believed to have been for 21 years and 9 months. Gabolde highlighted, in his analysis, the consistently small number of surviving scarabs known for Thutmose II, compared to Thutmose I and Hatshepsut respectively; for instance, Flinders Petrie's older study of scarab seals noted 86 seals for Thutmose I, 19 seals for Thutmose II and 149 seals for Hatshepsut while more recent studies by Jaeger estimate a total of 241 seals for Thutmose I, 463 seals for Hatshepsut and only 65 seals for Thutmose II.[12] Hence, unless there was an abnormally low number of scarabs produced under Thutmose II, this would indicate that the king's reign was rather short-lived. On this basis, Gabolde estimated Thutmose I and II's reigns to be approximately 11 and three full years, respectively.

Argument for a long reign

Although Ineni's autobiography can be interpreted to say that Thutmose reigned only a short time, it also calls Thutmose a "hawk in the nest," indicating that he was perhaps a child when he assumed the throne.[13] Since he lived long enough to father two children—Neferure and Thutmose III—this suggests that he may have had a longer reign of 13 years in order to reach adulthood and start a family. The German Egyptologist, J. Von Beckerath, uses this line of argument to support the case of a 13-year reign for Thutmose II.[14] Alan Gardiner noted that at one point, a monument had been identified by Georges Daressy in 1900,[15] which was dated to Thutmose's 18th year, although its precise location has not been identified.[16] \ This inscription is now usually attributed to Hatshepsut, who certainly did have an 18th year. von Beckerath observes that an 18-year date appears in a fragmentary inscription of an Egyptian official and notes that the date likely refers to Hatshepsut's prenomen Maatkare, which had been altered from Aakheperenre Thutmose II, with the reference to the deceased Thutmose II being removed.[17] There is also the curious fact that Hatshepsut celebrated her Sed Jubilee in her Year 16 which von Beckerath believes occurred 30 years after the death of Thutmose I, her father, who was the main source of her claim to power. This would create a gap of 13 to 14 years where Thutmose II's reign would fit in between Hatshepsut and Thutmose I's rule.[18]

Upon Thutmose's coronation, Kush rebelled, as it had the habit of doing upon the transition of Egyptian kingship. The Nubian state had been completely subjugated by Thutmose I,[19] but some rebels from Khenthennofer rose up, and the Egyptian colonists retreated into a fortress built by Thutmose I.[20] On account of his relative youth at the time, Thutmose II dispatched an army into Nubia rather than leading it himself, but he seems to have easily crushed this revolt with the aid of his father's military generals.[21]

Thutmose also seems to have fought against the Shasu Bedouin in the Sinai, in a campaign mentioned by Ahmose Pen-Nekhbet.[22] Although this campaign has been called a minor raid, there is a fragment which was recorded by Kurt Sethe which records a campaign in Upper Retenu, or Syria, which appears to have reached as far as a place called Niy where Thutmose I hunted elephants after returning from crossing the Euphrates. This quite possibly indicates that the raid against the Shasu was only fought en route to Syria.[23] 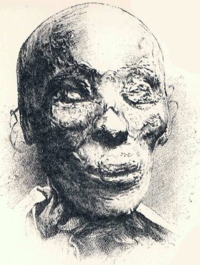 The mummified head of Thutmose II

The mummy was unwrapped by Gaston Maspero on July 1, 1886. There is a strong familial resemblance to the mummy of Thutmose I, his likely father, as the mummy face and shape of the head are very similar. The body of Thutmose II suffered greatly at the hands of ancient tomb robbers, with his left arm broken off at the shoulder-joint, the forearm separated at the elbow joint, and his right arm chopped off below the elbow. His anterior abdominal wall and much of his chest had been hacked at, possibly by an axe. In addition, his right leg had been severed from his body.[24] All of these injuries were sustained post-mortem, though the body also showed signs that Thutmose II did not have an easy life, as the following quote by Gaston Maspero attests:

"He had scarcely reached the age of thirty when he fell a victim to a disease of which the process of embalming could not remove the traces. The skin is scabrous in patches, and covered with scars, while the upper part of the skull is bald; the body is thin and somewhat shrunken, and appears to have lacked vigour and muscular power."[25]