Theodora, detail of a Byzantine mosaic in Basilica of San Vitale, Ravenna. 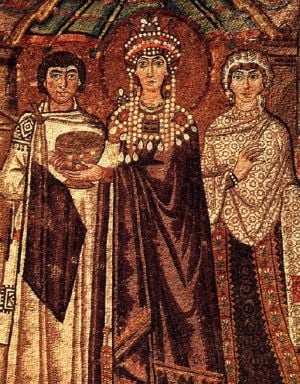 Theodora (c. 500 – June 28, 548) was empress of the Byzantine Empire and the wife of Emperor Justinian I. Along with her husband, she is a saint in the Orthodox Church, commemorated on November 14. She is considered to have been the most "most influential and powerful woman in the empire's history."[1] She used her influence to promote the status of women, enhancing their divorce rights, outlawing enforced prostitution, and securing inheritance rights for women. The death penalty was introduced for rape. She also mitigated the persecution of non-Orthodox Christians within the empire. With her husband, she built the famous Hagia Sophia basilica and transformed Constantinople into one of the most elegant cities of the time.

Theodora was probably born into the lowest class of Byzantine society, the daughter of Acacius, a bear keeper for the circus. It has been claimed, however, that she was a Mongol Princess.[2] Much of the information from this earliest part of her life comes from the Secret History of Procopius, published posthumously. Critics of Procopius (whose work reveals a man seriously disillusioned regarding his rulers) have dismissed his work as vitriolic and pornographic, but have been unable to discredit his facts. For example, the sources do not dispute Theodora emerged as a comic actress in burlesque theater, and that her talents tended toward what we might call low physical comedy. While her advancement in Byzantine society was up and down, she made use of every opportunity. She had admirers by the score. Procopius writes that she was a courtesan and briefly served as the mistress of Hecebolus, the governor of Pentapolis, by whom she bore her only child, a son. There was a downside to her repertoire as well; Procopius also repeatedly notes her lack of shame and cites a number of scenes to demonstrate it, and also the low regard in which she was held by respectable society.

It is believed by some scholars that sometime before meeting Justinian she became an adherent of the Non-Chalcedonian sect of Christianity, which claims Christ was of one incarnate nature, remaining their partisan throughout her life. Others instead argue that her association with Monophysitism is largely because of Justinian's putting her in charge of courting the Non-Chalcedonian reunion with the Chalcedonian party in the Church, and so while remaining Chalcedonian herself, she was pastorally favorable toward the non-Chalcedonians.

It is not known how Theodora came to the notice of Justinian. However, impressed by her beauty, he appears to have made her his mistress. Before they could marry, he elevated her to the status of a patrician, since until at her request the law was changed, patricians could only marry patricians. In 523, Theodora married Justinian, the magister militum praesentalis in Constantinople. On his accession to the Roman Imperial throne in 527, as Justinian I, he made her joint ruler of the empire, and appears to have regarded her as a full. This proved to be a wise decision. A strong-willed woman, she showed a notable talent for governance. In the Nika riots of 532, her advice and leadership for a strong (and militant) response caused the riot to be quelled and probably saved the empire. A contemporary official, Joannes Laurentius Lydus, remarked that she was "superior in intelligence to any man."[3] She is said to have blocked the rebels sword in hand as they stormed the Palace, and to have rallied her husband and the guards to repel the attack. Her husband thought to flee as a rival emperor was proclaimed, but she dissuaded him. The rebels were then forced into the Hippodrome and slaughtered. It was better, she said, "to die as a ruler than to live as nothing."[4] As co-ruler, Theodora met with foreign diplomats and also corresponded with other rulers. It was unusual at the time for a woman, even a Queen and co-ruler, to engage in these activities. 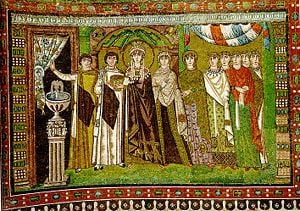 Empress Theodora and her retinue (mosaic from Basilica of San Vitale, sixth century).

Following the suppression of the revolt, the Emperor and Empress rebuilt Constantinople, making it one of the most elegant cities in the world at the time. They constructed 25 churches, including the Hagia Sophia. They also built bridges and water-ways.

Some scholars believe that Theodora was Byzantium's first noted proponent—and, according to Procopius, practitioner—of abortion; she convinced Justinian to change the law that forbade noblemen to marry lower class women (like herself). Theodora also advocated the rights of married women to commit adultery, and the rights of women to be socially serviced, helping to advance protections and delights for them; and was also something of a voice for prostitutes and the downtrodden. She built homes for prostitutes. She also helped to mitigate the ill treatment of non-Orthodox Christians and probably had a large part in Justinian's efforts to reconcile the Non-Chalcedonians to the Chalcedonian party.

Other scholars (and those who venerate Theodora as a saint) instead regard Theodora's achievements for women not as a modern feminist "liberation" to commit abortion or adultery, but rather as a truly egalitarian drive to give women the same legal rights as men, such as establishing homes for prostitutes, passing laws prohibiting forced prostitution, granting women more rights in divorce cases, allowing women to own and inherit property, and enacting the death penalty for rape, all of which raised women's status far above that in the Western portion of the Empire.

There were less charitable acts as well. Rumors spoke of private dungeons in her quarters into which people she disapproved of disappeared forever, though such rumors can be found regarding nearly any royal figure. More congenial is the story of how she sheltered a deposed patriarch for 12 years without anyone knowing of it.

Theodora did not have any children by Justinian. However, her niece married his heir, who became Justin II.

Theodora died of an unspecified cancer before the age of 50, some 20 years before Justinian died. It should be noted that there is no documentation to suggest that she died of breast cancer as some scholars have suggested. Her body was buried in the Church of the Holy Apostles, one of the splendid churches the emperor and empress had built in Constantinople. Both Theodora and Justinian are represented in beautiful mosaics that exist to this day in the Basilica of San Vitale at Ravenna in northern Italy, which was completed a year before her death. Following her death, Justinian passed hardly any new laws before his own demise, in 565. Theodora may have done more than any ruler in the ancient world to promote the status of women.

Retrieved from https://www.newworldencyclopedia.org/p/index.php?title=Theodora_(sixth_century)&oldid=992270
Categories:
Hidden category:
This page was last edited on 24 November 2015, at 21:06.
Content is available under Creative Commons Attribution/Share-Alike License; additional terms may apply. See Terms of Use for details.