The Ten Years' War (1868-1878) was the first of three wars that Cuba fought against Spain for its freedom, the other two being The Small War (La Guerra Chiquita; 1879-1880) and the Cuban War of Independence (1895-1898). The final three months of the last conflict escalated to become the Spanish-American War which brought Spain's South American Empire to an end, and saw the territorial expansion of the United States. Similarity between the aspirations of the Cubans, and the aspirations that had sparked the American Revolutionary War generated public support in the US for the Cuban cause.

A main issue was over-taxation and lack of representation in the colonial government. However, while the United States revolutionaries had an idea about the type of society they wanted to create, and were self-sufficient without English rule, the Cuban revolution lacked a thought through program on how a post-colonial Cuba would be governed, and lacked the self-sufficient populace that could support a democratic form of government. When independence was finally won, and a republic formed in 1902, civil war soon broke out and in 1906 the U.S. invaded to restore peace, and continued to play a supervisory role until Castro's revolution.

It is the desire of all people to seek just governance, but that requires responsibility, capability, and selflessness by those who govern. In the case of Cuba and many other nations who have sought liberation from colonial oppression, the violent overthrow of a regime can often lead to another form of oppressive regime that fills a vacuum in power.

The Ten Years War began on October 10, 1868, under the leadership of attorney Carlos Manuel de Céspedes and seconded by a group of patriots in the sugar mill La Demajagua, calling for liberty and independence of the island. During the first few days, the uprising almost failed. Céspedes attacked the small town of Yara on October 11, from which this revolution took its name, even though the attack on Yara was a failure and Céspedes escaped with only 12 men. The October 10 date is commemorated in Cuba as a national holiday under the name Grito de Yara ("Shout of Yara"). Céspedes liberated his own slaves as example for everyone else. However, many questioned Céspedes's plans for manumission, notably the rate at which slaves were to be freed, or disagreed with his call for U.S. annexation of Cuba.

Nevertheless, the Revolution of Yara spread throughout the eastern region of Cuba and patriots gathered in several parts of the island agreed to support Céspedes. By the end of October, the insurrection had some 12,000 volunteers.

That same month, Máximo Gómez, a former cavalry officer for the Spanish Army in the Dominican Republic, with his extraordinary military skills, taught the Cuban forces what would be their most lethal tactic: the machete charge. The machete charge was particularly lethal because it involved firearms as well. If the Spanish were caught on the march, the machetes would cut through their ranks. When the Spaniards (following then-standard tactics) formed a square, rifle fire from infantry under cover and pistol and carbine fire from charging cavalry would cause many losses. However, as it would be in wars such as these, yellow fever caused the heaviest losses because the Spanish had not acquired the childhood immunity that the Cuban troops had.

Progress of the War 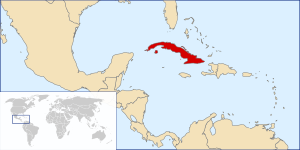 After some initial victories, and then defeats, Céspedes replaced Gomez with General Thomas Jordan, who brought a well-equipped force, as head of Cuban army. However, General Jordan's regular tactics, although initially effective, left the families of Cuban rebels far too vulnerable to the "ethnic cleansing" tactics of the ruthless Blas Villate, Count of Valmaceda (also spelled Balmaceda). Valeriano Weyler, who would reach notoriety as the "Butcher Weyler" in the 1895-1898 War, fought along the Count of Balmaceda. General Jordan then left, Máximo Gómez was returned to his command and a new generation of skilled battle-tested Cuban commanders rose from the ranks, these including Antonio Maceo, José Maceo, and Calixto Garcia Iñiguez and Vicente Garcia González[1]. Other war leaders of note fighting on the Cuban Mambí side included: Donato Mármol, Luis Marcano-Alvarez, Carlos Roloff, Enrique Loret de Mola, Sanguily, Domingo Goicuría, Guillermon Moncada, Quintin Bandera, Benjamín Ramirez, and Julio Grave de Peralta.

On April 10, 1869, a constitutional assembly took place in the town of Guáimaro in the province of Camagüey. Céspedes was elected president of this assembly and General Ignacio Agramonte y Loynáz and Antonio Zambrana, principal authors of the proposed Constitution, were elected Secretaries. After completing its work, the Assembly reconstituted itself as a Congress of Representatives, electing Salvador Cisneros Betancourt as its president, Miguel Gerónimo Gutiérrez as vice-president, and Agramonte and Zambrana as Secretaries. Céspedes was then elected, on April 12, 1869, as the first president of the Republic in Arms and General Manuel de Quesada (who had fought in Mexico under Benito Juárez during the French invasion of that country), as Chief of the Armed Forces.

Neither side in the war was able to win a single concrete victory, let alone crush the opposing side to win the war.

The Mambi Warriors fought using guerrilla warfare and their efforts had much more impact on the eastern side of the island than on the western, due in part to a lack of supplies. Ignacio Agramonte was killed by a stray bullet on May 11, 1873 and was replaced in the command of the central troops by Máximo Gómez. Due to political and personal disagreements and Agramonte's death, the Assembly deposed Céspedes as president, who was replaced by Cisneros. Agramonte had come to realize that his dream Constitution and government were ill suited to the Cuban Republic in Arms, which was the reason he quit as Secretary and assumed command of the Camaguey region. By being curtailed by the Congress, he understood Cespedes' plight, thus becoming a suppoter. Céspedes was later surprised and killed by a swift-moving patrol of Spanish troops on February 27, 1874. The new Cuban government had left him with only one escort and denied him permission to leave Cuba for the US, where he wanted to help to prepare and send armed expeditions.

Activities in the Ten Years War peaked in the years 1872 and 1873, but after the death of Agramonte and destitution of Céspedes, Cuban operations were limited to the regions of Camagüey and Oriente.

Gómez began an invasion of Western Cuba in 1875, but the vast majority of slaves and wealthy sugar producers in the region did not join the revolt. After his most trusted general, the American Henry Reeve, was killed in 1876, the invasion was over.

Spain's efforts to fight were hindered by the civil war (Third Carlist War), that broke out in Spain in 1872. When the civil war ended in 1876, more Spanish troops were sent to Cuba.

Conclusion of the War

Tomás Estrada Palma succeeded Cisneros as president of the Republic. Estrada Palma was captured by Spanish troops on October 19, 1877. As a result of successive misfortunes, on February 8, 1878, the constitutional organs of the Cuban government were dissolved and negotiations for peace were started in Zanjón, Puerto Príncipe.

General Arsenio Martínez Campos arrived in Cuba and was able to convince most of the rebels to accept the Pact of Zanjón on February 10, 1878. The Ten Years' War came to an end, except for some subsequent protests by a small group of followers of Antonio Maceo, who protested in Los Mangos de Baraguá on March 15. These protests were concluded by Maceo on May 28, 1878.

The Pact of Zanjón promised various reforms throughout the island. The reforms would improve the financial situation of the island of Cuba. Perhaps the most significant was to free all slaves who had fought Spain. A major conflict throughout the war was the abolition of the slavery in Cuba. Both the rebels and the people loyal to Spain wanted to abolish slavery. In 1880, a law was passed by the Spanish government that freed all of the slaves. However, the slaves were required by law to work for their masters for a number of years but the masters had to pay the slaves for their work. The wages were so low the slaves could barely afford to live off of them. The Spanish government lifted the law before it was to expire because neither the land owners nor the freed men appreciated it.

After the war ended, there were 17 years of tension between the people of Cuba and the Spanish government, including the Little War (La Guerra Chiquita) between 1879-1880. These separatists would go on to follow the lead of José Martí, the most passionate of the rebels chose exile over Spanish rule. There was also a severe depression throughout the island. Overall, about 200,000 people lost their lives in the conflict. The war also devastated the coffee industry and American tariffs badly damaged Cuban exports.

During the course of the Ten Years War, many atrocities were committed by the Spanish government and by Spanish sympathizers. Among the many incidents perpetrated during the war were:

Retrieved from https://www.newworldencyclopedia.org/p/index.php?title=Ten_Years’_War&oldid=1031209
Categories:
Hidden category:
This page was last edited on 23 January 2020, at 14:04.
Content is available under Creative Commons Attribution/Share-Alike License; additional terms may apply. See Terms of Use for details.