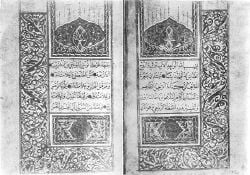 Tatian the Assyrian (second century C.E.) was a Christian writer and theologian who wrote the Diatessaron (meaning "Harmony of Four")—a synthesis of the four gospels that became the standard text in the Syriac-speaking churches until the fifth century, when it gave way to the four separate gospels in the Peshitta version.[1] Tatian attempted to resolve some of the contradictions found in the mainstream gospels by integrating them into one story and removing any duplicate information. For example, he omitted the conflicting genealogies of Matthew and Luke thereby creating a streamlined narrative sequence, which, however, was different from both the synoptic gospels and the Gospel of John.[2] Tation's harmony also does not include Jesus' encounter with the adulteress (John 7:53 - 8:11).

The Diatessaron combined the four canonical gospels into a single harmonious narrative. It is notable evidence for the authority already enjoyed by the four gospels by the mid-second century.[3]

Concerning the date and place of his birth, little is known beyond what he tells about himself in his Oratio ad Graecos, where he says he was born in the land of the Assyrians. He then moved to Rome where he seems to have come in contact with Christianity for the first time. After reading the Old Testament, he says, he was convinced of the unreasonableness of paganism. It was primarily his abhorrence of the pagan cults that led him to spend thought on religious problems. He adopted the Christian religion and may have become the pupil of Justin Martyr. It was during this period when Christian philosophers competed with Greek sophists, and like Justin, he opened a Christian school in Rome. It is not known how long he labored in Rome without being disturbed.

Following the death of Justin in 165 C.E., the life of Tatian is to some extent obscure. Irenaeus remarks (Haer., I., xxvlii. 1, Ante-Nicene Fathers, i. 353) that after the death of Justin, Tatian was expelled from the church for his Encratitic (ascetic) views (Eusebius claims he founded the Encratitic sect), as well as for being a follower of the gnostic leader Valentinius. It is clear that Tatian left Rome, perhaps to reside for a while in either Greece or Alexandria, where he may have taught Clement. Epiphanius relates that Tatian established a school in Mesopotamia, the influence of which extended to Antioch in Syria, and was felt in Cilicia and especially in Pisidia, but his assertion can not be verified.

The early development of the Syrian church furnishes a commentary on the attitude of Tatian toward baptism, which required the catechumen to take a vow of celibacy. This shows how firmly the views of Tatian were established in Syria, and it supports the supposition that Tatian was the missionary of the countries around the Euphrates. Current scholarly consensus is that he died c. 185, perhaps in Assyria.

His Oratio ad Graecos[4] tries to prove the worthlessness of paganism, and the reasonableness and high antiquity of Christianity. It is not characterized by logical consecutiveness, but is discursive in its outlines. The carelessness in style is intimately connected with his contempt of everything Greek. No educated Christian has more consistently separated from paganism; but by overshooting the mark, his scolding and blustering triad lost its effectiveness because it lacks justice. His tendency to attack Greek philosophers by mocking their misfortunes (such as an unfortunate death, or being sold into slavery) could also be considered an ad hominem fallacy. However as early as Eusebius, Tatian was praised for his discussions of the antiquity of Moses and of Jewish legislation, and it was because of this chronological section that his Oratio was not generally condemned.[5]

His other major work was the Diatessaron, a "harmony" or synthesis of the four New Testament Gospels into a combined narrative of the life of Jesus. Ephrem the Syrian referred to it as the Evangelion da Mehallete ("The Gospel of the Mixed"), and it was practically the only gospel text used in Syria during the third and fourth centuries.

In the fifth century, the Diatessaron was replaced in the Syrian churches by the four original Gospels. Rabbula, Bishop of Edessa, ordered the priests and deacons to see that every church should have a copy of the separate Gospels (Evangelion da Mepharreshe), and Theodoret, Bishop of Cyrus, removed more than two hundred copies of the Diatessaron from the churches in his diocese.

A number of recensions of the Diatessaron are available. The earliest, part of the Eastern family of recensions, is preserved in Ephraim's Commentary on Tatian's work, which itself is preserved in two versions: an Armenian translation preserved in two copies, and a copy of Ephraem's original Syriac text from the late fifth to early sixth century, which has been edited by Louis Lelow (Paris, 1966). Other translations include translations made into Arabic, Persian, and Old Georgian. A fragment of a narrative about the Passion found in the ruins of Dura-Europos in 1933 was once thought to have been from the Diatessaron, but more recent scholarly judgement does not connect it directly to Tatian's work.

The earliest member of the Western family of recensions is the Latin Codex Fuldensis, written at the request of bishop Victor of Capua in 545 C.E. Although the text is clearly dependent on the Vulgate, the order of the passages is distinctly how Tatian arranged them. Tatian's influence can be detected much earlier in such Latin manuscripts as the Old Latin translation of the Bible, in Novatian's surviving writings, and in the Roman Antiphony. After the Codex Fuldensis, it would appear that members of the Western family lead an underground existence, popping into view over the centuries in an Old High German translation (c. 830 C.E.), a Dutch (c. 1280), a Venetian manuscript of the thirteenth century, and a Middle English manuscript from 1400 that was once owned by Samuel Pepys.

In a lost writing, entitled On Perfection according to the Doctrine of the Savior, Tatian designates matrimony as a symbol of the tying of the flesh to the perishable world and ascribed the "invention" of matrimony to the devil. He distinguishes between the old and the new man; the old man is the law, the new man the Gospel. Other lost writings of Tatian include a work written before the Oratio ad Graecos that contrasts the nature of man with the nature of the animals, and a Problematon biblion which aimed to present a compilation of obscure Scripture sayings.

The starting-point of Tatian's theology is a strict monotheism, which becomes the source of the moral life. Originally the human soul possessed faith in one God, but lost it with the fall. In consequence, humanity sank under the rule of demons into the abominable error of polytheism. By monotheistic faith, the soul is delivered from the material world and from demonic rule and is united with God. God is spirit (pneuma), but not the physical or stoical pneuma; he was alone before the creation, but he had within himself potentially the whole creation.

The means of creation was the dynamis logike ("power expressed in words"). At first there proceeded from God the Logos who, generated in the beginning, was to produce the world by creating matter from which the whole of creation sprang. Creation is penetrated by the pneuma hylikon, "world spirit," which is common to angels, stars, people, animals, and plants. This world spirit is lower than the divine pneuma, and becomes in a person the psyche or "soul," so that on the material side and in his soul a person does not differ essentially from the animals; though at the same time the person is called to a peculiar union with the divine spirit, which raises people above the animals. This spirit is the image of God in humanity, and to it humanity's immortality is due.

The first-born of the spirits fell and caused others to fall, and thus the demons originated. The fall of the spirits was brought about through their desire to separate man from God, in order that he might serve not God but them. Man, however, was implicated in this fall, lost his blessed abode and his soul was deserted by the divine spirit, and sank into the material sphere, in which only a faint reminiscence of God remained alive.

As by freedom humanity fell, so by freedom humanity may turn again to God. The Spirit unites with the souls of those who walk uprightly; through the prophets he reminds men of their lost likeness to God. Although Tatian does not mention the name of Jesus, his doctrine of redemption culminates in his Christology.

Retrieved from https://www.newworldencyclopedia.org/p/index.php?title=Tatian&oldid=1019840
Categories:
Hidden category:
This page was last edited on 8 May 2019, at 14:51.
Content is available under Creative Commons Attribution/Share-Alike License; additional terms may apply. See Terms of Use for details.