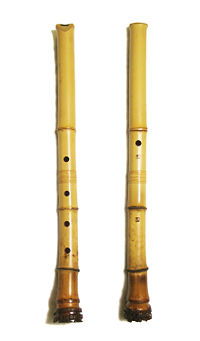 A shakuhachi flute, blowing edge up.

The shakuhachi (尺八) is a Japanese end-blown flute, which is held vertically like a recorder, instead of transversely like the Western transverse flute. Its name means "1.8 foot (shaku)," the length of a basic shakuhachi, but shakuhachi vary in length from about 1.3 shaku up to 3.3 shaku. The longer the shakuhachi, the lower its tuning. Shakuhachi are usually made from the root end of a bamboo culm, but versions now exist in wood and plastic. The five finger holes are tuned to a pentatonic scale with no half-tones, and the player can bend each pitch as much as a whole tone or more, using techniques called meri and kari, in which the blowing angle is adjusted to bend the pitch downward and upward, respectively.

As early as the thirteenth century, the shakuhachi was used by the monks of the Fuke sect of Zen Buddhism in the practice of suizen (blowing meditation). The monks of Fuke, known as komusō ("priests of nothingness"), wandered throughout Japan playing the shakuhachi and seeking alms until the sect was dissolved during the Meiji Restoration. Honkyoku (本曲, "original pieces") is a repertoire of the pieces originally played by the Fuke monks. The soulful sound of the shakuhachi made it popular in Western pop and jazz music.

The name shakuhachi (shaku-hachi) means "1.8 foot," referring to the length of the instrument. It is a compound of two words:

Thus, "shaku-hachi" means "one foot eight" (almost 55 centimeters), the standard length of a shakuhachi. Other shakuhachi vary in length from about 1.3 shaku up to 3.3 shaku (the longer the shakuhachi, the lower its tuning). Although the sizes differ, they are all still referred to generically as "shakuhachi." 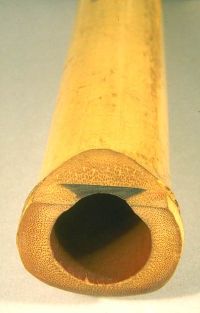 A shakuhachi showing its utaguchi (歌口, blowing edge) and inlay

A recorder player blows into a duct, also called "fipple," and thus has limited pitch control. The shakuhachi player blows as one would blow across the top of an empty bottle, but the opposite side of the shakuhachi has a sharp edge, allowing the player substantial pitch control. The five finger holes are tuned to a pentatonic scale with no half-tones, but the player can bend each pitch as much as a whole tone or more, using techniques called meri and kari, in which the blowing angle is adjusted to bend the pitch downward and upward, respectively. Pitches may also be lowered by shading or partially covering finger holes. Since most pitches can be achieved via several different fingering or blowing techniques on the shakuhachi, the timbre of each possibility is taken into account when composing or playing. The shakuhachi has a range of two full octaves (the lower is called otsu, the upper, kan) and a partial third octave (tai-kan). The different octaves are produced using subtle variations of breath and embouchure.

A 1.8 shakuhachi produces D4 (D above Middle C, 293.66Hz) as its base note—the note it produces with all five finger holes covered, and a normal blowing angle. In contrast, a 2.4 shakuhachi has a base note of A3 (A below Middle C, 220Hz). As the length increases, the spacing of the finger holes also increases, stretching both fingers and technique. Longer flutes often have offset finger holes, and very long flutes are almost always custom made to suit individual players. Many of the honkyoku, in particular, are intended to be played on these longer flutes to achieve the appropriate feeling.

Much of the shakuhachi's subtlety (and display of the player's skill) lies in its rich tone coloring, and the ability for its variation. Different fingerings, embouchures and amounts of meri can produce notes of the same pitch, but with subtle or dramatic differences in the tone coloring. The honkyoku pieces rely heavily on this aspect of the instrument to enhance their subtlety and depth.

Shakuhachi are usually made from the root end of a bamboo culm and are extremely versatile instruments. Holes can be covered partially (1/3 covered, 1/2, 2/3, etc.) and pitch varied subtly or substantially by changing the blowing angle. Professional players can produce virtually any pitch they wish from the instrument, and play a wide repertoire of original Zen music, ensemble music with koto, biwa and shamisen, folk music, jazz, and other modern pieces.

Due to the skill required, the time involved, and the range of quality in materials to craft bamboo shakuhachi, one can expect to pay from US$ 500 to US$ 5,000 for a new or used flute. Because each piece of bamboo is unique, shakuhachi cannot be mass-produced, and craftsmen must spend much time finding the correct bore shape for each individual flute to result in the correct pitch over all notes. Specimens of extremely high quality, with valuable inlays, or of historical significance can fetch US$ 10,000 or more. Plastic or PVC shakuhachi have some advantages over their traditional bamboo counterparts: They are extremely durable, nearly impervious to heat and cold, and typically cost less than US$ 100. Shakuhachi made of wood are also available, typically costing less than bamboo but more than synthetic materials. Nearly all players, however, prefer bamboo, citing tonal qualities, aesthetics, and tradition. 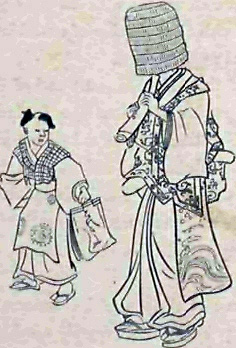 The bamboo flute first came with gagaku music to Japan from China via Korea. The shakuhachi proper, however, is quite distinct from its continental ancestors, the result of centuries of isolated evolution in Japan.

Around the tenth century, four Chinese monks were invited to teach the xiao, an ancestor of the shakuhachi, to Japanese monks, and it slowly began to attracted interest. During the medieval period, shakuhachi were most notable for their role in the Fuke sect of Rinzai Zen Buddhist monks, known as komusō ("priests of nothingness"), who used the shakuhachi as a spiritual tool. Their songs (called "koten honkyoku") were paced according to the players' breathing and were played as a form of meditation (suizen).

During the Edo period (1615-1868), the shakuhachi underwent major changes. Until then it had been a thin and long flute, similar to the Chinese xiao. During the seventeenth century, shakuhachi makers started to use a thicker bamboo found in the mountains of Japan's southern island of Kyushu, maintaining its original 5 holes. Instead of having a straight flute, four rows of the bamboo roots were used at the bottom of the flute, and the embouchure became larger.

Travel around medieval Japan was restricted by the shogunate, but the Fuke sect obtained an exemption from the Shogun, since their spiritual practice required them to move from place to place playing the shakuhachi and begging for alms (one famous song reflects this mendicant tradition, "hi fu mi hachi gaeshi," "one two three pass the alms bowl"). They persuaded the Shogun to give them "exclusive rights" to play the instrument. In return, some were required to spy for the shogunate, and the Shogun also sent his own spies out in the guise of Fuke monks. (This was made easier by the wicker baskets that the Fuke wore over their heads, a symbol of their detachment from the world.) Several particularly difficult honkyoku pieces became well-known as "tests;" if the monk could play them, he was a real Fuke (shika no tone). If he couldn't, he was probably a spy and might be executed if he were in unfriendly territory.

When the shogunate was abolished during the Meiji Restoration (1868), the Fuke sect was also dissolved because many undesirable people were posing as Fuke mendicants. The playing of the shakuhachi was officially forbidden for several years. This did not have much effect on non-Fuke folk traditions, since the tunes could be played just as easily on another pentatonic instrument. However, the honkyoku repertoire was known exclusively to the Fuke sect and transmitted by repetition and practice, and much of it was lost, along with many important documents.

When the Meiji government did permit the playing of shakuhachi again, it was only in ensembles accompanying the koto and shamisen. It was not until later that honkyoku were allowed to be played publicly again as solo pieces.

Honkyoku (本曲, "original pieces") are the pieces of shakuhachi or hocchiku music played by mendicant monks of the Fuke Zen sect (komusō). Komusō played honkyoku as a form of meditation and to solicit alms as early as the Muromachi period (1138-1573 C.E.). Honkyoku is the practice of suizen ("blowing Zen"). A verbal and written lineage of many honkyoku continues today, though the music is now often practiced in a concert or performance setting. There are many schools (ryū) , or schools, of honkyoku, each with its own style, emphasis, and teaching methods.

At one time, the Fuke sect consisted of over one hundred temples throughout Japan. During the eighteenth century, a high ranking komusō named Kinko Kurosawa was commissioned by the Ichigetsu-Ji Fuke Temple to travel to the various other temples to collect honkyoku pieces. Kinko spent three years on the road and collected and revised a repertoire of 36 pieces, now known as "Kinko Ryu Honkyoku." The 36 pieces of the Kinko Ryū Honkyoku repertoire as currently played were significantly changed and codified by later generations, including Miura Kindo and others.

Watazumi Doso (海童道祖) "Roshi" (1910-December 14, 1992), a master of the end-blown Japanese bamboo flute who attained the title of roshi in the school of Rinzai Zen, assembled the Dokyoku Honkyoku repertoire of pieces during the 1950s. Watazumi played the un-lacquered hocchiku, in contrast to the modern shakuhachi, stressing that to truly understand nature and oneself, one had to use an instrument of the most raw and natural origin. This belief inspired him to create and lead the Watazumi-do ("Way of Watazumi") school of spiritual discipline. He frequently performed on large bass instruments. Watazumi was also referred to as Watazumi-do Shuso (also spelled Watazumido Shuso or Watazumido-Shuso), "shuso" meaning "head student," a Zen term referring to the student selected by the Zen master to instruct the other students.

New recordings of shakuhachi music are relatively plentiful, especially on Japanese labels and increasingly in North America, Europe, and Australia. Although the instrument is sometimes considered quaint and outdated in Japan, it is experiencing growing popularity overseas.

The primary genres of shakuhachi music are:

The sound of the shakuhachi is also featured in western genres of music, from electronica to pop-rock to jazz music, especially after being commonly shipped as a "preset" instrument on various synthesizers and keyboards beginning in the 1980s.

Retrieved from https://www.newworldencyclopedia.org/p/index.php?title=Shakuhachi&oldid=1098174
Categories:
Hidden category:
This page was last edited on 27 January 2023, at 12:20.
Content is available under Creative Commons Attribution/Share-Alike License; additional terms may apply. See Terms of Use for details.