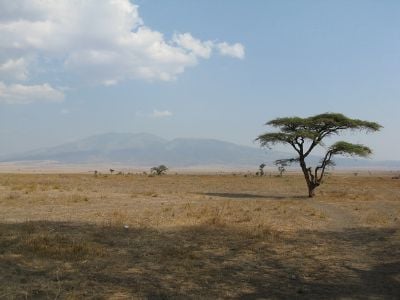 The Serengeti Plain, located in north-central Tanzania, (Africa) is world renowned as an ideal location for wildlife and nature photography. Much of the beauty is attributed to its sweeping vistas and dramatic natural features that extend over 60,000 square kilometers. The Serengeti has more than 2 million herbivores and thousands of predators. Blue Wildebeests, gazelles, zebras and buffalos are the animals most commonly found in the region.

The area is also home to the Ngorongoro Conservation Area, which contains the Olduvai Gorge, where some of the oldest hominid fossils are found, as well as the Ngorongoro Crater, the world's largest unbroken volcanic caldera.

Maasai woman of the Serengeti Plain, 2006.

The landscape of the Serengeti Plain is extremely varied, ranging from savannah, to hilly woodlands, to open grasslands. The geographic diversity of the region is due to the extreme weather conditions that plague the area, particularly the potent combination of heat and wind. Many environmental scientists claim that the diverse habitats in the region originated from a series of volcanoes, whose activity shaped the basic geographic features of the plain and added mountains and craters to the landscape.

In the southern portions of the plain, broad expanses of open grassland play host to herds of zebras and wildebeest, images which have become closely associated with the Serengeti. To the north of the grasslands lie the savannah, home to gazelles and ostriches. This zone of the plain is also famous for granite outcroppings called kopjes, that interrupt the plains and play host to separate ecosystems than are found in the grasses below. To the north of the savannah lies a wooded, hilly region that combines many of grassland features of the savannah, with more difficult terrain. This area of the plain is host to herds of elephants, evidence of which can be seen in the damaged trees scattered throughout the area.

The climate of the Serengeti Plain is predominantly warm and dry, with the rainy season falling between March and May. During times where the rainfall is steady, the environment is rich and lush and resplendent with plant life. Soon after the rains stop, however, the green landscape begins to dry out and prepare again for the rains. Rainfall can vary throughout the plain, from 508 mm a year in the grasslands to 1,200 mm annually near the shores of Lake Victoria.

Some say that in the Serengeti, each 12-month period contains two years: one of plenty followed by one of famine. Once the welcome rains cease the streams run dry and the lush green grass turns brown, crackling underneath one's feet. Then it is time for the great migration. [1]

One of the most eye catching events in the Serengeti Plain is the biannual migration, also called the "circular migration," of zebras and wildebeest from the grasslands of the south to the northern reaches of the plain and back again. This migration, which is the longest overland migration in the world, first takes place in April, when the grasslands of the south begin to dry up.[2] Unable to survive on the dry plain the wildebeest lead the charge toward the north. The zebras then join into the mass migration, careful to maintain their family groupings in the the movement. The long trek to the north is quite challenging for many of the animals, particularly as the males begin to compete for dominance and mating partners. Once the animals have reached the fertile lands of the northern plains, they will stay there and graze until November. Once November comes to the Serengeti Plain, the wildebeest and the zebras begin their migration back to the grasslands of the south. When leaving the northern plains, lions and cheetahs often follow the herd, posing a significant threat to animals who fall too far behind. Another challenge for animals during the migration is stampedes, which have been known to kill hundreds of startled animals at once. Over 250,000 wildebeest alone will die along the journey.[2]

The migration is chronicled in the 1994 documentary film, Africa: The Serengeti.[3]

The Serengeti Plain has been used as a grazing area for the Maasai people for many centuries. Despite the fertile grazing land and the abundant natural wildlife, however, the area was little known to outside political interests until 1913. At this time the first professional hunters entered the region, drawn to the vast herds of rare and valuable animals. Along with the hunters came political organization and Fort Ikoma was rapidly established in the north to serve as an administrative center.

Continual hunting in the area began to threaten the once abundant lion populations. Due to the fact that lions were considered a nuisance for civilizations in the region, gentlemen on motor car safaris were encouraged to hunt the animals from the safety of the vehicle. This trend rapidly decreased the lion population, and threatened extinction of the lions in the Serengeti. A movement to protect the shrinking lion population contributed significantly to the formation of a Game Reserve in 1921. This small Game Reserve would later be expanded into the Serengeti National Park.

The Serengeti has gained worldwide recognition for its abundant wildlife and stunning natural features. Much of the initial attention for the area was gained by Bernhard Grizmek, who worked with his son to publish the book Serengeti Shall Not Die. This book was later adapted into a film version of the same material. It is considered one of the most prominent early works of nature conservation.

The Serengeti National Park strictly preserves the natural environment of the region to foster wildlife and vegetation growth. As such, human habitation is strictly prohibited in the park. Early in the history of the Serengeti National Park the inhabitants of the region were removed from the protected area so the space could be enclosed and placed under the control of the Tanzanian government. This forced–removal continues to be a controversial part of the park's history.

Currently, only National Park staff, researchers, zoological staff, and hotel employees are allowed to live permanently on the National Park land. Many of the human settlements in the park are clustered at Seronera, which is the home to the park's administrative building and airstrip.

Retrieved from https://www.newworldencyclopedia.org/p/index.php?title=Serengeti_Plain&oldid=1098022
Categories:
Hidden category:
This page was last edited on 26 January 2023, at 09:56.
Content is available under Creative Commons Attribution/Share-Alike License; additional terms may apply. See Terms of Use for details.