Selena Quintanilla-Pérez (April 16, 1971 – March 31, 1995), best known simply as Selena, was an iconic Mexican American singer who has been called "the queen of Tejano music".[2] The youngest child of a Mexican-American couple, Selena released her first album at the age of twelve. She won Female Vocalist of the Year at the 1987 Tejano Music Awards and landed a recording contract with EMI a few years later. Her fame grew throughout the early 1990s, among Latinos in the US and especially in Spanish-speaking countries. Her album Selena Live! won Best Mexican-American Album at the 36th Grammy Awards and her 1994 album Amor Prohibido, which was nominated for another Grammy, produced four number-one Spanish-language hits.

Selena was murdered at the age of 23 by Yolanda Saldívar, the president of her fan club. On April 12, 1995, two weeks after her death, George W. Bush, then the governor of Texas, declared her birthday "Selena Day" in Texas. Warner Brothers made a film based on her life starring Jennifer Lopez in 1997. As of June 2006, Selena was commemorated with a museum and a bronze life-sized statue (Mirador de la Flor in Corpus Christi, Texas). The statue and museum are visited by hundreds of fans each week.

Selena was born in Lake Jackson, Texas to a Mexican-American father, Abraham Quintanilla and a Mexican/Native American mother, Marcella Ophelia Zamora, and was raised as a Jehovah's Witness. She began singing at the age of six. When she was nine her father founded the singing group Selena y Los Dinos, which she fronted. They initially performed at the Quintanilla family's restaurant, "Papa Gayos," but the restaurant failed shortly afterwards.

The family soon went bankrupt and was evicted from its home. Taking their musical equipment in an old bus, they relocated to Corpus Christi, Texas. There, they performed wherever they could: weddings, parties, and fairs. These efforts at spreading their names paid off in 1984 when Selena was twelve years old, when she recorded her first album for a local record company. The album was not sold in stores and her father bought all of the original copies. It was re-released in 1995 under the title Mis Primeras Grabaciones.

Selena did well in school, but as she grew more popular, the travel demands of her performance schedule began to interfere with her education. Her father pulled her out of school altogether when she was in eighth grade. She continued her education on the road. At age 17 she earned a high school diploma from The American School of Correspondence in Chicago. Selena released her second album, Alpha, in 1986.

Selena's full-throated voice and her mastery of traditional Mexican vocal techniques, together with her youthful passion and exuberance on stage, soon won her a large number of fans from both the old and new generation of Latino music fans in the US. At the 1987 Tejano Music Awards, she won Best Female Vocalist and dominated the award for the next seven years. In 1988, she released two albums, Preciosa and Dulce Amor. In 1989, José Behar, the former head of the Sony Latin Music division, signed Selena with Capitol/EMI, a record company he founded. He later said that he signed Selena because he thought he had discovered the next Gloria Estéfan. Selena signed a contract with Coca-Cola to become one of their spokespersons the same year and her concerts drew thousands of people.

In 1988, Selena met Chris Perez, who had his own band. Two years later, the Quintanilla family hired him to play in Selena's band and the two quickly fell in love. At first her father did not approve of their relationship and went as far as firing Perez from the band. He eventually came to accept the relationship, telling Selena that Perez could come back only if they married and moved next door to the family home. Selena accepted and on April 2, 1992. Selena and Perez married in Nueces County, Texas, and Selena added her new husband's surname to her own. 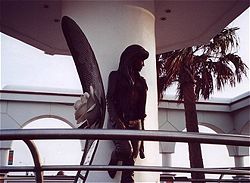 In 1990, Selena released another album, Ven Conmigo, written by her main songwriter and brother Abraham Quintanilla, III. This recording was the first Tejano album recorded by a female artist to achieve gold status. Songs from that album, such as "Como La Flor," helped make Selena a star.

Around the same time, a registered nurse and fan named Yolanda Saldívar approached Selena's father with the idea of starting a fan club. Her wish was granted and she became the club's president. Later she became the manager of Selena's clothing boutiques, and ultimately her murderer.

Selena's 1993 Selena Live! album won a Grammy award for Best Mexican-American Performance. She released her next album, Amor Prohibido, in 1994. The album was nominated for another Grammy award for Mexican-American Album of the Year. She began designing and manufacturing a clothing line in 1994 and opened two boutiques called Selena Etc., one in Corpus Christi and the other in San Antonio. Both were equipped with in-house beauty salons. Hispanic Business magazine reported that the singer earned over $5 million dollars from these boutiques. Selena also made appearances alongside Erik Estrada in a Latin soap opera titled Dos Mujeres, Un Camino.

Selena and her band continued to receive accolades; Billboard's Premio Lo Nuestro awarded them six prestigious awards including Best Latin Artist and Song of the Year for "Como La Flor." Coca-Cola released a commemorative bottle in her honor to celebrate their five-year relationship. Meanwhile, her duet with the Barrio Boyzz, "Dondequiera Que Estes," raced to the top of the Latin charts. This prompted Selena to tour in New York City, Argentina, Puerto Rico, and Central America where she was in growing demand. The duet with Salvadoran singer Alvaro Torres, "Buenos Amigos," was also a hit.

By fall of 1994, Amor Prohibido was a commercial success in Mexico and made four number-one Latin hits, replacing Gloria Estefan's Mi Tierra on the chart's number-one spot. It sold over 400,000 copies by March 1995, reaching gold status. At this point, Selena developed plans to record an English-language album, but continued to tour for Amor Prohibido while beginning preparations for the album.

In February 1995, she played a concert at the Houston Livestock Show and Rodeo in the Houston Astrodome, which attracted over 61,000 fans—more than country stars such as George Strait, Vince Gill, and Reba McEntire. Later that year, she made a cameo appearance in the romantic comedy Don Juan DeMarco, which starred Marlon Brando, Johnny Depp, and Faye Dunaway. (She appeared as a background mariachi singer during the first scene.)

Despite her busy schedule, Selena visited local schools to talk to students about the importance of education. She also donated her time to civic organizations such as D.A.R.E. and planned a fund-raising concert to help AIDS patients. These demonstrations of community involvement won her loyalty from her fan base. Selena scheduled her English album for release in the summer of 1995. Afraid that her fans would think she was turning her back on them, she was also working on a new Tejano album as well. Meanwhile, she planned to open two more boutiques, including one in Monterrey, Mexico.

In early 1995, the Quintanillas discovered that Yolanda Saldívar was stealing money from the boutiques and decided to fire her. Soon after the fallout, Selena agreed to meet Saldívar in a Days Inn hotel in Corpus Christi on the morning of March 31, 1995, to retrieve paperwork for tax purposes.

An argument ensued and Saldívar drew a gun from her purse, pointing it first at her own head and then at Selena. As the singer turned and left the room, Saldívar shot her once in the back. Selena fled to the manager's office in the lobby for help, with Saldívar chasing her. Before collapsing to the floor, Selena named Saldívar as her assailant and gave the room number where she had been shot. After an ambulance and the police arrived on the scene, Selena was transported to a local hospital. She died there from loss of blood at 1:05 p.m., at the age of 23.

In October 1995, a Houston jury convicted Saldívar of first degree murder and sentenced her to life in prison, with the possibility of parole in 30 years.

Selena's death devastated and saddened Latinos and non-Latinos alike across the United States and abroad. Major networks interrupted their regular programming to break the news. Numerous vigils and memorials were held in her honor, and radio stations in Texas played her music non-stop. Her funeral drew approximately 60,000 mourners, many of whom traveled from outside the United States. Among the celebrities who were reported to have immediately phoned the Quintanilla family to express their condolences were Gloria Estefan, Julio Iglesias, and Madonna. People magazine published a commemorative issue in honor of Selena's memory and musical career, titled Selena 1971–1995, Her Life in Pictures. Two weeks after her death, on April 12, George W. Bush, then Governor of Texas, declared Selena's birthday April 16 as "Selena Day" in Texas.

That summer, Selena's album Dreaming of You, a combination of Spanish-language songs and new English-language tracks, debuted at number one on the U.S. Billboard 200, making her the first Hispanic singer to accomplish this feat and the second highest debut after Michael Jackson's HIStory. It sold two million copies in its first year. Songs such as "I Could Fall in Love" and "Dreaming of You" were played widely by mainstream English-language radio, with the latter reaching #21 on the Billboard Hot 100. Meanwhile, "I Could Fall in Love," while ineligible for the Hot 100 at the time, reached #12 on the Hot 100 Airplay chart and the top ten on the Adult Contemporary Chart.

In 1997, Jennifer Lopez played Selena in a film about her life. Directed by Gregory Nava, the biopic opened with mostly positive reviews. Although Lopez herself succeeded as a pop star a few years later, Selena's voice was dubbed in for all the songs in the movie. For her role, Lopez was nominated for a Golden Globe award for Best Actress in a Musical.

On April 7, 2005, Reliant Stadium in Houston hosted a tribute concert, Selena ¡VIVE!. Held a week after the tenth anniversary of her death, over 65,000 fans attended the concert, which featured high-profile artists including Gloria Estefan, Pepe Aguilar, Thalía, Paulina Rubio, Ana Barbara, Alejandra Guzmán, Ana Gabriel, and Fey. The artists performed renditions of Selena's music, as did her brother, A.B. Quintanilla. Broadcast live on the Univision network, Selena ¡VIVE! was the highest-rated and most-viewed Spanish-language entertainment show in American television history. The show, which lasted over three hours, scored a 35.9 Nielsen household rating.