Sand Creek Massacre National Historic Site is a National Historic Site in Kiowa County, Colorado near the towns of Eads and Chivington, commemorating the Sand Creek Massacre. Officially established on April 27, 2007, the 12,500 acre site recognizes the significance of the massacre in American history, and its ongoing significance to the Northern and Southern Cheyenne and Arapaho tribes.

The Sand Creek Massacre was one of the most horrific atrocities committed against Native Americans during the period of America's Westward Expansion. A band of peaceful Cheyenne, under the leadership of Chief Black Kettle, were encamped on the banks of Sand Creek in southeastern Colorado. Sent there by the territorial governor, they trusted they were in safe territory. However, between 250 and 400 Indians lost their lives when they were attacked, unarmed, in the early morning hours of November 29, 1864. Initially reported and celebrated as a great military victory, a national scandal erupted following the findings of a Congressional inquiry.

The creation of the memorial site is, as stated by Secretary of the Interior Dirk Kempthorne, "so that, as a country, we might never forget the events that took place along the banks of Sand Creek. We owe it to the men, women, and children who lost their lives that day, to their families, and to all Americans that we learn from this terrible tragedy.”

The site is considered sacred to Native Americans. The Cheyenne and Arapaho tribes hold an annual Spiritual Healing Run at the Site, with most tribal participants traveling to the site from Montana, Wyoming, and Oklahoma.

The Sand Creek Massacre of the Cheyenne and Arapaho is one of the most controversial and painful incidents in the history of White-Indian relations in North America, rivaled only by events such as the Battle of the Little Bighorn, the Wounded Knee Massacre, and the Trail of Tears.

The Pike's Peak gold rush of 1858 lead to increasing conflicts between whites and Native Americans. Though the Cheyenne were settled peacefully in land granted them by the U.S. government in the Fort Laramie Treaty of 1851, white settlers were increasingly encroaching on their lands. Even the U.S. Indian Commissioner admitted that "We have substantially taken possession of the country and deprived the Indians of their accustomed means of support."[1]

In the spring of 1864, as the Civil War raged in the east, Colonel John Chivington launched a campaign of violence against the Cheyenne and their allies in Colorado. American troops gradually encroached on Cheyenne lands until fighting broke out. Chief Black Kettle asked William Bent, white husband of a Cheyenne woman, Owl Woman, to persuade the Americans to negotiate peace and, briefly, it appeared possible. 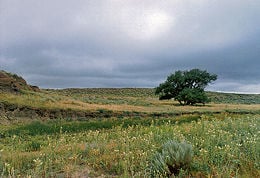 "All we ask is that we have peace with the whites. We want to hold you by the hand. You are our father. We have been travelling through a cloud. The sky has been dark ever since the war began. These braves who are with me are willing to do what I say. We want to take good tidings home to our people, that they may sleep in peace. I want you to give all these chiefs of the soldiers here to understand that we are for peace, and that we have made peace, that we may not be mistaken by them for enemies. I have not come here with a little wolf bark, but have come to talk plain with you."[1]

Believing peace had been agreed upon, Black Kettle retreated to a camp along Sand Creek in southeastern Colorado along with a group of several hundred Cheyenne and Arapaho. They had gone there at the request of Governor Evans in order to escape military campaigns against other bands of their tribes who were understood to be more hostile to Whites.

However, Samuel Curtis, Chivington's superior officer, informed him that "I want no peace till the Indians suffer more...No peace must be made without my directions."[1] On the morning of November 28, Chivington and his army of 1,200 captured Bent's son Robert, forced him to guide them to the Cheyenne campsite, and there killed and mutilated between 250 and 400 Native Americans in what became known as the Sand Creek Massacre.[2]

As instructed, Black Kettle was flying both the American flag and a white flag above his tipi, as an indicator that they were a peaceful camp. As the troops descended upon the camp, Black Kettle gathered his people under the flag, believing in its protection. The flags were ignored by the American soldiers, and they began to savagely kill the unarmed men, women and children.

Chivington proudly displayed trophies of his "battle," including body parts, in Denver for months following.

Aftermath of the massacre

The "battle" was initially greeted as a victory in the Colorado War against "hostile Indians," however, within months, Congressional inquiries revealed the truth, and a national scandal erupted. It happened in what is now Kiowa County Colorado, and has become known as the Sand Creek Massacre.

Robert Bent testified in court against Chivington. His brothers, Charles and George Bent, joined the Cheyenne's Dog Soldiers and fought to drive the European-Americans from the their homeland.

Major Wynkoop, who had encouraged peace efforts with the Cheyenne while posted in Colorado prior to the Massacre, investigated Chivington's conduct at Sand Creek on behalf of the U.S. Army, leading to Chivington's condemnation. In 1866 Wynkoop became an Indian agent for the Southern Cheyenne and Arapaho, resigning in December 1868 in protest of the destruction of Black Kettle's village in the Battle of Washita River.

Territorial Governor John Evans eventually lost his job for his part in setting up the incident, and Colonel John Chivington, commander of the U.S. forces, was castigated by the United States Congress and the scandal followed him for the rest of his life. Evans would go on to make significant important contributions to the early Denver community and while Chivington also made some, his reputation remained tainted while Evans is still honored today.

In its 'Interim Site Management Plan of April 2006', the National Park Service states; "The months following Sand Creek witnessed an eruption of warfare throughout the central plains, with Cheyenne, Lakota, and Arapaho warriors striking the emigration routes along the North Platte, South Platte, Republican, and Arkansas valleys. The conflicts of the 1870s, including the Great Sioux War of 1876-1877, also could trace their origins at least partly to the Sand Creek Massacre and its long-term unsettling effects among the plains tribesmen."[3]

The Sand Creek Massacre is one of Colorado’s most profound historic events. The legacy of the attack and its aftermath has reverberated throughout the west since its occurrence.

"The other day, I touched some of the articles that were found, and I thought that whoever used them probably died. You think that maybe one of those bullets went through someone's body. Then the sadness came. An overwhelming feeling. Our ancestor's blood is still here. They have not been properly buried." (Gail Ridgely, Northern Arapaho descendant of Sand Creek Massacre survivors. Quoted in 1999.)[4]

On October 6, 1998, the 105th Congress of the United States authorized the Sand Creek Massacre National Historic Site Study Act. Public Law 105-243 was introduced by Senator Ben Nighthorse Campbell and mandated that the National Park Service identify the location and extent of the massacre area and determine its suitability and feasibility as a potential National Historic Site.[5] 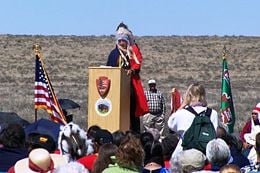 In 1999, archaeological teams from the National Park Service, Department of the Interior's Burea of Land Management, Colorado Historical Society and accompanied by Native American observers, made a major archaeological discovery of remains of the massacre site. Large numbers of period bullets, camp equipment, and other items convinced the NPS that they had found the correct site. Subsequent transfers of ownership from the Dawson family, former owners of the property have left the title of the site to the Cheyenne and Arapaho tribes with management to be undertaken by NPS.

Following twenty-five months of study, Congress concurred with the site boundaries. The Sand Creek Massacre National Historical Site was authorized by Public Law 106-465 on November 7, 2000, in order to "recognize the national significance of the massacre in American history, and its ongoing significance to the Cheyenne and Arapaho people and the descendants of the massacre victims." The law authorized establishment of the site once the National Park Service acquired sufficient land from willing sellers to preserve, commemorate, and interpret the massacre. The site, near the junction of County Road 54 and County Road "W," was listed on the National Register of Historic Places on September 28, 2001.

On April 23, 2007 it was announced that site would become America's 391st official park unit. In signing the official paperwork, Secretary of the Interior Dirk Kempthorne said,

“It is with great reverence and honor that I have signed the papers to create the Sand Creek Massacre National Historic Site, so that, as a country, we might never forget the events that took place along the banks of Sand Creek. We owe it to the men, women, and children who lost their lives that day, to their families, and to all Americans that we learn from this terrible tragedy.”[6]

The effective date of the establishment was April 27, 2007, with an official dedication that took place the following day, April 28, 2007. The authorized boundary for the National Historic Site encompasses 12,500 acres (50.6 km²). The Site is still in its youth, with preservation and conservation studies taking place. Fixtures on the site are rudimentary, and in some cases, temporary. Simple markers and memorials exist, yet even in its simplicity, it is visited by people from around the nation, in particular descendents of the massacre's survivors. People come to pray and give honor. The Cheyenne and Arapaho tribes hold an annual Spiritual Healing Run at the Site, with most tribal participants traveling to the site from Montana, Wyoming, and Oklahoma.