Saint Antonio Maria Claret y Clarà (December 23, 1807—October 24, 1870) was a nineteenth-century Catalan Roman Catholic archbishop, missionary, and confessor of the Spanish queen-regnant Isabella II. A defender of the Church's interests as Spain's official religion, he was opposed by the liberal forces in both Spain and Cuba, where he served as archbishop of Santiago before returning to Spain as the queen's adviser and confessor.

Claret was born at Sallent, Catalonia, Spain, in 1807. He worked as a weaver before becoming a seminary student. Ordained in 1835, he served as a missionary in Catalonia and the Canary Islands, where he directed retreats. Claret founded the Congregation of Missionary Sons of the Immaculate Heart of Mary (Claretians). In 1850, he became Archbishop of Santiago de Cuba, where he founded the Teaching Sisters of Mary Immaculate. Following his work in the Caribbean, Pope Pius IX ordered him back to Spain, where he served as confessor to Queen Isabella II and was exiled with her.

Said to have the gifts of prophecy and miracles, he was reported to have preached 10,000 sermons and published 200 works, and spread devotion to the Eucharist and the Immaculate Heart of Mary. In 1870, Claret died in a Cistercian monastery at Fontfroide, Narbonne, France. He was venerated in 1899 by Pope Leo XIII; beatified in 1934, and canonized in 1950 by Pope Pius XII.

Claret was born at Sallent, near Barcelona (Catalonia) on December 23, 1807, the son of a small woolen manufacturer. He received an elementary education in his native village, and at the age of 12 became a weaver. A little later he went to Barcelona to specialize in his trade, and remained there until he was 20. Meanwhile, he devoted his spare time to study and became proficient in Latin, French, and engraving.

Recognizing a call to religious life, he left Barcelona. He now wished to become a Carthusian, but finally entered the seminary at Vic, Spain, in 1829, and was ordained on June 13, 1835. He received a benefice (grant) in his native parish, where he continued to study theology until 1839; but as missionary work appealed strongly to him, he proceeded to Rome. There, he entered the Jesuit novitiate, but finding himself unsuited for that manner of life, he returned shortly to Spain and served as a pastor in Viladrau and Girona, attracting notice by his efforts on behalf of the poor.

Recalled by his superiors to Vic, he was engaged in missionary work throughout his native Catalonia. In 1848, he was sent to the Canary Islands where he gave retreats for 15 months. Returning to Vic, he established the Congregation of the Missionary Sons of the Immaculate Heart of Mary on July 16, 1849. He also founded the great religious library at Barcelona which was called "Librería Religiosa" (now Librería Claret), and which has issued several million affordable copies of the best ancient and modern Catholic works. 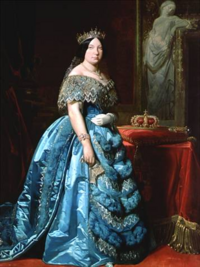 So great was the fruit of his zealous labors, that Pius IX—at the request of the Spanish crown (queen-regnant Isabella II of Spain)—appointed him Archbishop of Santiago, Cuba in 1849. When arrived at his destination, he began a thorough reform at Santiago's seminary, which was reorganized and strengthened with clerical discipline. In the first two years of his ministry there, over 9,000 marriages—most involving common-law relationships—were validated under the Catholic tradition. He erected a hospital and numerous schools. On three different occasions, Claret made a systematic visitation to the entire diocese, including all the local missions. His passionate work stirred up much opposition in the anti-clerical mood of the period, as had happened previously in Spain. No less than 15 attempts were made on Claret's life; his cheek was laid open from ear to chin by a would-be assassin's knife at the eastern provincial capital of Holguin.

In February 1857, he was recalled to Spain by Queen Isabella II, who made him her confessor. He obtained permission to resign his see in Cuba and was appointed to the titular see of Trajanopolis. In addition to acting as the queen's spiritual adviser, his influence was now directed greatly to help the poor and to propagate learning; he lived frugally and took up his residence in an Italian hospice. For nine years he was rector of the Escorial monastic school where he established an excellent scientific laboratory, a museum of natural history, a library, college, and schools of music and languages. His further plans were frustrated by the Revolution of 1868, which ultimate deposed Isabella II and led to the establishment of the first Spanish republic.

When Isabella recognized the new secular government of a united Italy, Claret left the court and hastened to Rome, where Isabella had incurred the pope's displeasure for ending the Catholic Church's status as the official religion of Spain. He later returned to Madrid authorized by the pope to absolve the queen for her role in Spain's secularization. In 1869, Claret went again to Rome to prepare for the First Vatican Council. Due to failing health, he withdrew to Prades in France, where he was still harassed by his Spanish enemies; shortly afterwards he retired to the Cistercian abbey at Fontfroide, Narbonne, southern France, where he died on October 24, 1870, at age 63. 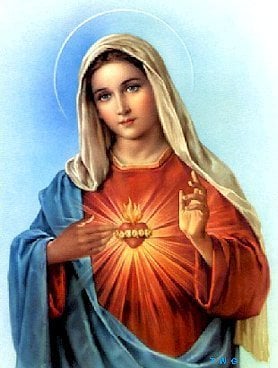 Icon of the Immaculate Heart of Mary

Through his sermons and writings, Claret contributed greatly to bring about the revival of the Catalan language, although most of his works were published in Spanish, especially during his stay in Cuba and Madrid.

Claret's printed works number over 130, including his Autobiografia (autobiography) written by order of his spiritual director.

The Congregation of the Missionary Sons of the Heart of Mary (or Claretians), authorized by Pius IX on February 11, 1870, had over 450 houses and 3,100 members in 2000, with missions in five continents. Archbishop Claret also founded and drew up the rules of several communities of religious Sisters as well.

For the Catholic Church, Claret's remarkable life testified to his sanctity. In 1887, he was declared Venerable by Pope Leo XIII in 1899. His relics were transferred to the mission house at Vic in 1897, at which time his heart was found incorrupt. He was canonized by Pope Pius XII in 1950, with his liturgical feast day on the date of his death, October 23. Today, Claret's grave is visited by many pilgrims.