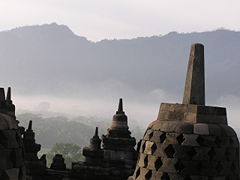 Borobudur stupas overlooking a shadowy mountain of Java. For centuries, it has been deserted.

Sailendra (meaning "Lord of the Mountain" in Sanskrit) was the name of an Indonesian dynasty, emerging in Central Java at the end of the eighth century. The name may have been associated with the volcanic mountains of Central Java. The name of the dynasty (Sailendra-vamsa) is first attested in the Candi Kalasan Inscription dated 778.[1] The Sailendra practiced intensive rice cultivation and had an administrative hierarchy which controlled the allocation of water for irrigation. The Sailendra dynasty held the concept of the "Dewa-Raja" (God-King), the belief that the King had divine power as a living god among his subjects.[2] Though their economy was based on rice cultivation, they had access to ports on the northern coast of Java and maintained commercial and marital ties with the Srivijaya kingdom in southern Sumatra. The Sailendra participated in the Spice Route trade between China and India, but their level of participation never rivaled that of Srivijaya.

According to the traditional account, the Sailendra kingdom came to an abrupt end when a prince from the rival Hindu Sanjaya Dynasty, named Rakai Pikatan, displaced them in 832. Rakai Pikatan, who was the crown prince of the Sanjaya Dynasty, married Pramodhawardhani, a daughter of Samaratunga, king of Sailendra. The Sailendras were firm followers of Mahayana Buddhism and were credited for building several temples in Java.[3]

Most of the historical information about the Sailendras comes from stone inscriptions found at Buddhist temple sites, from oral tradition, and from mentions in the records of other states. The Sailendras were one of many dynastic lineages in Central Java, but they appear to have become dominant between 760 and 860 C.E.[4] The earliest Sailendra inscription dates from 778 C.E. (the Candi Kalasan Inscription). It commemorates the foundation of the temple to the Buddhist goddess Tara in 778 C.E. during the reign of King Panagkaran, who is described as “an ornament of the Sailendra dynasty.”[5] The inscription also lists a number of officials and relatives of the king, who helped to administer specific districts and villages.

Sailendra power centered on the Kedu Plain in south-central Java, an area where paddy field, or sawah, cultivation flourished and whose location made it secure from sea-borne raids that were frequent on the north coast of the island. The ecology of the Kedu Plain required cooperation in the allocation of water among rice cultivators. Local ruling lineages emerged to control and coordinate water in each stream or river basin. According to Clifford Geertz, the American cultural anthropologist, paddy culture requires extensive work on drainage, canals, and terracing. A lineage which could mobilize labor from more than one basin could dominate other local lineages. The Sailendra mobilized labor across the boundaries of each basin by the use of symbolic power associated with the use of Hindu and Buddhist rituals including Sanskrit inscriptions, an Indianized court and the construction of a kraton, temples, and monuments.

The kings of the Sailendra-dynasty held, like other Javanese kings, the concept of the "Dewa-Raja" (God-King), the belief that the King had divine power as a living god among his subjects. The Sailendra were the first to use the title Sri Maharaja, derived from a Sanskrit compound meaning “Great King.”[6]

Although the Sailendras clearly manifested themselves most strongly on the island of Java, some historians suggested that the Sailendras had their homeland outside Java. Apart from Java itself, a homeland in the Srivijaya kingdom in Sumatra (c.670-c.1270 C.E.), India, Sri Lanka, and the Funan kingdom (c.100-c.600 C.E. ) in Cambodia, have been suggested.[7]

The French scholar George Coedès once proposed that the Sailendras may have been related to the rulers of the ancient Cambodian kingdom of Funan, because the title "Lord of Mountain" used by the Sailendras may have resembled titles used by the Funanese rulers. In support of his hypothesis, Coedès pointed out that the name "Funan" as used by the Chinese is related to the Cambodian term "phnom," which means "mountain."[8] Other specialists on Cambodian history have discounted Coedès' hypothesis.[9] They argue that that no historical evidence exists to show that the Funanese ever ascribed the title "mountain king" to their rulers.[10] Borobudur, the largest Buddhist structure in the world built by Sailendra dynasty.

The Sailendras appear to have had access to ports on the northern coast of Java, and after the formation of Srivijaya in southern Sumatra, the Sailendra maintained close relations, including marriage alliances with Srivijaya. During the late ninth century, when Srivijaya monarchs donated sleeping quarters for monks at the Buddhist pilgrimage site of Nalanda in northern India, they emphasized their Sailendra lineage, indicating that the Sailendras had more prestige among the Buddhist community.

The mutual alliance between the two kingdoms ensured that Srivijaya had no need to fear the emergence of a Javanese rival and that the Sailendra had access to the international market. The Sailendra participated in the Spice Route trade between China and India, but their level of participation never rivaled that of Srivijaya. Intensive rice cultivation was the foundation of the Sailendra kingdom.

The Sailendra covered the Kedu Plain with Vajrayana Buddhist shrines and temples, celebrating and affirming their power. The Borobudur temple complex, built between 778 and 824 C.E. by King Samaratunga, who married the Srivijayan princess Dewi Tara, was the greatest accomplishment of the Sailendra. Borobudur was the first massive Buddhist monument in Southeast Asia and influenced the construction of later monuments. Other Buddhist sites associated with the Sailendras are the temple structures of Candi Mendut, Candi Kalsan, and Candi Sewu.

J.G. de Casparis, author of the most comprehensive work on the Sailendra, proposed that, “in 856 Balaputra was defeated by Pikatan, where upon Balaputra retreated to Srivijaya, the country of his mother, to become the first Sailandra ruler of Srivijaya. Thus in the late ninth century Srivijaya was ruled by a Buddhist Sailendra ruler, while Java was ruled by Pikatan and his successors who patronized Siva" (cf. De Casparis, 1956; Hall, 1985:111).

Some historians describe the Sailendra collapse as a retreat to Sumatra, implying that the dynasty also ruled Srivijaya. It is possible that Balaputra was a Srivijayan prince with a maternal link to the Sailendra and that his attack on Java was a Srivijayan attempt to annex the former Sailendra domain. The hostile relations between Srivijaya and Mataram tend to confirm the thesis. The Sanjaya Dynasty went on to establish the Javanese kingdom of Mataram.

Retrieved from https://www.newworldencyclopedia.org/p/index.php?title=Sailendra&oldid=989778
Categories:
Hidden category:
This page was last edited on 4 August 2015, at 14:49.
Content is available under Creative Commons Attribution/Share-Alike License; additional terms may apply. See Terms of Use for details.