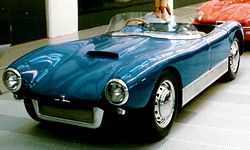 SAAB AB is an aviation, defense, and car manufacturing company based in Sweden and founded in 1937, in Trollhättan. Its name was an acronym for "Svenska aeroplanaktiebolaget" (translates to Swedish Aeroplane Limited), thus written as "SAAB." In 1939, Saab merged with the Linköping based ASJA and the headquarters moved to Linköping. During changes in company ownership in the 1990s, the company name became SAAB AB.

Originally manufacturing airplanes, the company sought ways in which to diversify its business and in the late 1940s, started to manufacture Saab Automobiles, the reverse of the Rolls-Royce, Ltd. story which began with cars then expanded into a major builder of aircraft engines. The automobile division was based in Trollhättan. The first car was the Saab 92001 on June 10, 1947. The company soon developed a reputation for safe and reliable automobiles, with a notable competition history. Saab cars won many rallies in the 1960s, ceased competing in 1980, but recommenced in 2000. In the late 1950s, Saab ventured into the computer market with DataSAAB. In 1969. SAAB merged with the truck maker Scania-Vabis, and between 1969 and 1995, the company was called Saab-Scania AB. General Motors bought 51 percent of the automobile division Saab Automobile in 1990, and acquired the rest a decade later. The best known feature of Saab cars are their turbocharged engines, in addition to a reputation for precision engineering and reliability.

Since 1998, the British aerospace company BAE Systems has been the largest shareholder in Saab following its acquisition of a 35 percent stake from Investor AB by its predecessor, British Aerospace. In January 2005, BAE reduced its shareholding to 20 percent, which it views as a long term interest. Investor AB also maintains a 20 percent share. 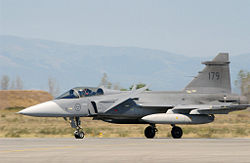 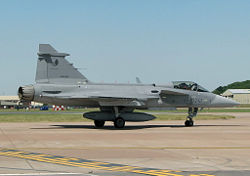 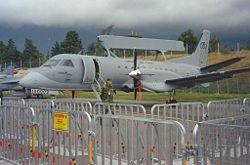 The main focus of aircraft production is fighter aircraft, with the recent JAS 39 Gripen as the main model. SAAB has been making airplanes since the 1930s, and the purely jet predecessors to the Gripen were the Tunnan, the Lansen, the Draken and the Viggen. The last civilian models made by SAAB were the Saab 340 and Saab 2000. Both were mid-range, turboprop-powered, passenger planes. The development and the manufacturing of these airplanes takes place in Linköping, Sweden.

In 1995, SAAB Military Aircraft and British Aerospace (now BAE Systems) formed the joint venture company, SAAB-BAe Gripen AB, with the goal of adapting, manufacturing, marketing and supporting Gripen internationally. This cooperation was extended in 2001, with the formation of Gripen International for the same purpose.

BAE designed an improved wing, which they then manufactured and are set to produce 45 percent of export airframes. SAAB Military Aircraft is responsible for the overall "aircraft system" including basic aircraft development and production, and testing and delivery. 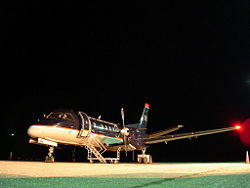 The Datasaab company was a result partly of the need of heavy computational power for the aircraft development, partly of the science-fictional idea to make a computer that would be small enough to mount in an aeroplane as navigational equipment. During the 1960s, several successful and advanced systems were developed and sold to several European countries (used, for example, in banking). The aircraft computer (CK37) was achieved in 1971, in the Viggen. The now less successful company was sold off in 1975 to Sperry UNIVAC, while flight computer development was kept in SAAB.

Saab Automobile AB is an automobile manufacturing company in Sweden, and is currently a wholly-owned subsidiary of the General Motors Corporation. Saab is the exclusive automobile Royal Warrant Holder appointed by H.M. the King of Sweden.[1] Saab directly competes with products from Audi, BMW, Mercedes-Benz, and Volvo.[2]

Until 1990, the company was owned by SAAB, an acronym for "Svenska Aeroplan Aktie(B)olaget" (The Swedish Aeroplane Company), and was part of a conglomerate which included SAAB Aerospace and the truck manufacturer Scania.

Saab can be traced back to its origin of Scandinavia. The original Svenska Aeroplan Aktie(B)olaget was established in 1937, with the express purpose of building aircraft for the Swedish Air Force. As World War II was ending, it was apparent that the company's market for military aircraft would decline and after considering other options, Saab decided to move into the passenger car market, appointing Gunnar Ljungström in charge of design. The company's first car, the Saab 92 was a streamlined steel-bodied 2 door saloon with a two cylinder 2 stroke engine driving the front wheels and with independent suspension all round. The company's aviation roots were evident in the car with the best drag coefficient of any production car in the world (CD = 0.32) at the time. The car's name was simply the 92nd SAAB design project and all previous 91 designs had been aircraft. One of the engineers working on the SAAB 92 prototype, Hans Osquar Gustavsson, also took part in the development of the JAS 39 Gripen.[3]

Three cylinders replaced two with the introduction of the Saab 93 in 1955, and, until the Saab 95 and 96 in 1966, which used a 60 degree V4 4 stroke engine made by Ford, the company was renowned for its 2 stroke motors, which continued until emissions regulations ended production in 1973.

The company moved to larger cars with the Saab 99 of 1967, which featured a 1709cc inline four cylinder 4 stroke engine designed by Riccardo in the UK, initially shared with the Triumph. Produced by Saab from 1970, the engine grew to 2 liters in 1972, and gained an optional turbocharger in 1977.

The turbocharger installation in the Saab 99 differed from other manufacturers by also incorporating a wastegate for regulating the boost level. With a relatively small turbocharger and a wastegate, the resulting engine would appear to the driver as a larger capacity engine (without the corresponding increase in fuel consumption), thus improving driveability as opposed to just increasing peak power and having a large lag such as in the BMW 2002 turbo.

In 1978, Saab signed an agreement with FIAT to sell Lancia A112 and rebadged Lancia Delta as Saab 600 and jointly develop a new car platform which saw the light of day in 1984 with the Saab 9000. The 9000 shared its structure with the Fiat Croma, Lancia Thema, and Alfa Romeo 164 under the Type Four chassis.

Although turbocharged cars had given Saab a big boost from the end of the 1970s, especially with the introduction of the Saab 900, by the late 80s, Saab was producing more cars than they were selling and in 1989 had 40,000 units in stock. The Arlöv plant was closed, but heavy financial losses continued. Talks were opened with Volvo, FIAT, Mazda, and Ford and in January 1990, Saab-Scania moved their passenger vehicle operation to a new company, Saab Automobile AB. 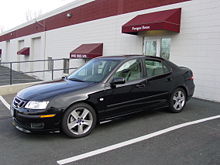 General Motors Corporation bought 50 percent of Saab Automobile on March 15, 1990, for US$600 million, with an option to acquire the entire company within a decade. David J. Herman became President of the new entity with Stig Göran Larsson as Vice President. Before exercising its option to buy the entire company, GM shared its ownership of Saab Automobile with Investor AB.

Losses continued and the Malmö plant was closed in 1991. The "New Generation" Saab 900 using the same platform as the Opel Vectra was launched in 1993 and in 1995, Saab declared a profit for the first time since 1988.

In March 2005, it was announced that GM would move the production of the next-generation Saab 9-3 from Trollhättan to the Opel plant in Rüsselsheim, Germany. The Trollhättan factory would produce European Cadillacs.

A new crossover SUV, dubbed the 9-4X, will share a platform with a new Cadillac BRX and is on its way for 2009.

While Saab is in fact an acronym, and, as with many other manufacturers, the word "SAAB" appears in all-capitals within the corporate emblem and in on-vehicle badging, the current correct capitalization of Saab when in print is "Saab," and not "SAAB." Other manufacturers such as Volvo, Toyota, Lexus, Acura, and Chevrolet employ the use of all-capitalized vehicle badging, but they are still considered proper names and capitalized as such when written. Likewise, Saab is treated as a proper name and not an acronym, despite its origins.

Furthermore, all current Saab vehicles are badged with a large 9 and a smaller 3, 5, or 7x following the 9, such as "9³." However, the digits are considered separate, and are spoken as, for example, "nine three," and written as "9-3." Nearly every Saab model ever produced has begun with the number 9 (Saab 600 being an exception), and Saab's two models became 9-3 and 9-5 in the late 1990s. 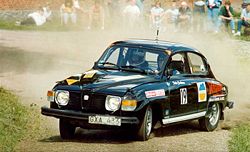 Some of the early cars, such as the two-strokers, V4s, and Saab 99 were quite successful in rally sport, notably the 96 in the 1960s RAC Rally and Monte Carlo Rally, driven by Erik Carlsson.

Retrieved from https://www.newworldencyclopedia.org/p/index.php?title=Saab&oldid=1092443
Categories:
Hidden category:
This page was last edited on 22 December 2022, at 18:29.
Content is available under Creative Commons Attribution/Share-Alike License; additional terms may apply. See Terms of Use for details.