Ruby Dee (née Wallace; October 27, 1922 – June 11, 2014) was an American actress, poet, playwright, screenwriter, journalist and activist. She was married to actor Ossie Davis until his death in 2005.

Dee began her acting career on the Broadway stage before appearing in films and television. Roles for which she is best known include A Raisin in the Sun (1961), Do the Right Thing (1989), and American Gangster (2007) for which she was nominated for an Academy Award for Best Supporting Actress. She was the recipient of Grammy, Emmy, Obie, Drama Desk, Screen Actors Guild Award, and Screen Actors Guild Lifetime Achievement Awards as well as the National Medal of Arts and the Kennedy Center Honors.

Dee and her husband, Ossie Davis, stood in the forefront of changing the experience of black actors in the entertainment industry playing leading roles rather than being relegated to those of maids and butlers. They were also activists for civil rights, personal friends of both Martin Luther King, Jr. and Malcolm X. Despite experimenting with an open marriage for a time, they showed deep love and commitment to each other and were an outstanding example of a successful black couple in America. 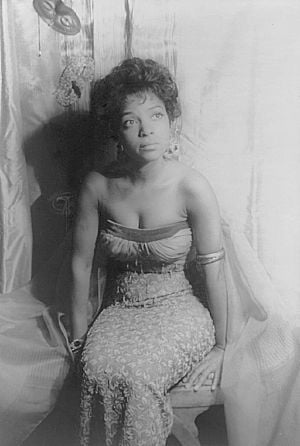 Born Ruby Ann Wallace in Cleveland, Ohio on October 27, 1922, she was the third child born to Gladys Hightower and Marshall Edward Nathaniel Wallace. Her parents were two teenagers who married when Gladys became pregnant with the first child. In three years Gladys left Ruby's father with three children. He remarried, to Emma Amelia Benson, a schoolteacher who had studied at Atlanta University under W.E.B. Du Bois.[1]

The family moved to New York City, and the children were raised in Harlem.[2] She attended Hunter College High School and went on to graduate from Hunter College with a degree in romance languages in 1945.[3]

Ruby married blues singer Frankie Dee Brown in 1941, and began using his middle name as her stage name.[4] The couple divorced in 1945.[3]

Three years later she married actor Ossie Davis, who she met while costarring in the 1946 Broadway play Jeb.[5] Together, Dee and Davis wrote an autobiography in which they discussed their political activism and their decision to have an open marriage (later changing their minds).[6] Together they had three children: son, blues musician Guy Davis, and two daughters, Nora Day and Hasna Muhammad.

Did you know?
Ruby Dee and Ossie Davis had an open marriage, although they found that they preferred monogamy

She was a breast cancer survivor of more than three decades.[7]

Dee died on June 11, 2014, at her home in New Rochelle, New York, from natural causes at the age of 91.[8] Her wish was to be cremated, and her ashes held in the same urn as that of Davis, with the inscription "In this thing together."[3] A public memorial service was held Saturday, September 20, 2014 at the Riverside Church in New York City.[9] 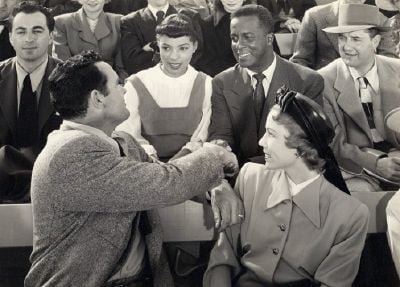 Dee joined the American Negro Theater as an apprentice, working with Sidney Poitier, Harry Belafonte, and Hilda Simms.[3] She made several appearances on Broadway. Her first onscreen role was in That Man of Mine in 1946. She received national recognition for her role in the 1950 film The Jackie Robinson Story.[2] In 1965, Dee performed in lead roles at the American Shakespeare Festival as Katherina in The Taming of the Shrew and Cordelia in King Lear, becoming the first black actress to portray a lead role in the festival. Her career in acting crossed all major forms of media over a span of eight decades, including the films A Raisin in the Sun, in which she recreated her stage role as a suffering housewife in the projects, and Edge of the City. She played both roles opposite Poitier.[3]

During the 1960s, Dee appeared in such politically charged films as Gone Are the Days and The Incident, which is recognized as helping pave the way for young African-American actors and filmmakers. In 1969, Dee appeared in 20 episodes of Peyton Place.[2] She appeared in the role of Cora Sanders, a Marxist college professor loosely influenced by the real-life Angela Y. Davis, in the Season 1/Episode 14 of Police Woman in 1975. The. She appeared in one episode of The Golden Girls' sixth season. She played Queen Haley in Roots: The Next Generations, a 1979 miniseries.[2]

Dee was nominated for eight Emmy Awards, winning once for her role in the 1990 TV film Decoration Day.[10] She was nominated for her television guest appearance in the China Beach episode, "Skylark." Her husband Ossie Davis (1917–2005) also appeared in the episode. She appeared in Spike Lee's 1989 film Do the Right Thing, and his 1991 film Jungle Fever.[2]

In 1995, Dee and Davis were awarded the National Medal of Arts.[11] They were also recipients of the Kennedy Center Honors in 2004. In 2003, she and Davis narrated a series of Works Progress Administration (WPA) slave narratives in the HBO film Unchained Memories.[12] In 2007 the winner of the Grammy Award for Best Spoken Word Album was shared by Dee and Davis, for With Ossie And Ruby: In This Life Together, and former President Jimmy Carter.[3][13]

Dee was nominated for an Academy Award for Best Supporting Actress in 2007 for her portrayal of Mama Lucas in American Gangster. She won the Screen Actors Guild award for the same performance. At 83 years of age, Dee was the second oldest nominee for Best Supporting Actress, behind Gloria Stuart who was 87 when nominated for her role in Titanic. This was Dee's only Oscar nomination.[14]

On February 12, 2009, Dee joined the Aaron Copland School of Music at Queens College orchestra and chorus, along with the Riverside Inspirational Choir and NYC Labor Choir, in honoring Abraham Lincoln's 200th birthday at the Riverside Church in New York City. Under the direction of Maurice Peress, they performed Earl Robinson's The Lonesome Train: A Music Legend for Actors, Folk Singers, Choirs, and Orchestra, in which Dee was the Narrator.[15] 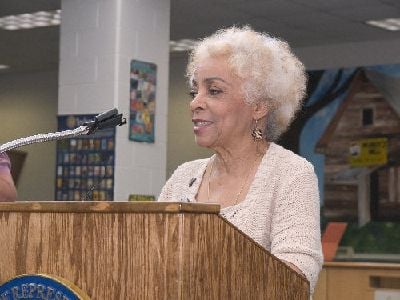 Dee and Davis were well-known civil rights activists. Dee was a member of the Congress of Racial Equality (CORE), the NAACP, the Student Nonviolent Coordinating Committee, Delta Sigma Theta sorority and the Southern Christian Leadership Conference. Dee and Davis were both personal friends of both Martin Luther King, Jr. and Malcolm X, with Davis giving the eulogy at Malcolm X's funeral in 1965.[16] In 1970, she won the Frederick Douglass Award from the New York Urban League.[2]

In 1999, Dee and Davis were arrested at 1 Police Plaza, the headquarters of the New York Police Department, protesting the police shooting of Amadou Diallo.[17]

In early 2003, The Nation published "Not In My Name," an open proclamation vowing opposition to the impending US invasion of Iraq. Ruby Dee and Ossie Davis were among the signatories, along with Robert Altman, Noam Chomsky, Susan Sarandon, and Howard Zinn, among others.

In November 2005 Dee was awarded—along with her late husband—the Lifetime Achievement Freedom Award, presented by the National Civil Rights Museum located in Memphis. In 2009 she received an Honorary Degree from Princeton University.[13]

In a statement on hearing of her death, Gil Robertson IV of the African American Film Critics Association said, "the members of the African American Film Critics Association are deeply saddened at the loss of actress and humanitarian Ruby Dee. Throughout her seven-decade career, Ms Dee embraced different creative platforms with her various interpretations of black womanhood and also used her gifts to champion for Human Rights. Her strength, courage and beauty will be greatly missed."[2]

Following her death the marquee on the Apollo theater read “A TRUE APOLLO LEGEND RUBY DEE 1922-2014.”[8]