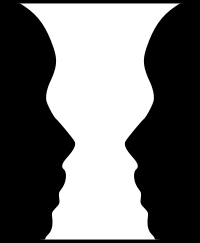 Rubin's vase (sometimes known as the Rubin face or the Figure-ground vase) is a famous set of cognitive optical illusions developed around 1915, by the Danish psychologist Edgar Rubin. Rubin's figure-ground distinction influenced the Gestalt psychologists, such as Max Wertheimer and Kurt Koffka, who discovered many similar illusions themselves. The higher-level cognitive processes involved in such perceptual effects intrigued the Gestalt psychologists, who were very interested in the operational principle of the brain as holistic and parallel. Artists, including the master of ambiguous figures M. C. Escher, have also utilized this type of illusory effect to introduce complex and intriguing features into their works. Thus, the Rubin's vase and similar figures provide both opportunities for valuable research into human perceptual processes and to bring joy and fascination to many through their inclusion in works of art, showing humanity's endless fascination with the creative and unusual.

The Rubin vase illusion was first developed by psychologist Edgar Rubin, although similar images can be found in eighteenth century French prints.[1] The image was introduced in 1915, in Rubin's two-volume work, the Danish-language Synsoplevede Figurer ("Visual Figures"), which was very well-received; Rubin included a number of similar images, such as a black and white Maltese cross figure, but the one that became the most famous was the figure-ground vase (perhaps because the Maltese cross could also be easily interpreted as a black and white beach ball.)

The illusion is somewhat similar to the "duck-rabbit" ambiguous figure described by Joseph Jastrow, although in that case the figure is always seen as the object but it's identification switches back and forth from that of a duck to that of a rabbit. In the Rubin vase, the face and vase alternate between figure and ground, such that the part of the image seen as object alternates.

Rubin explained the illusion as follows:

One can then state as a fundamental principle: When two fields have a common border, and one is seen as figure and the other as ground, the immediate perceptual experience is characterized by a shaping effect which emerges from the common border of the fields and which operates only on one field or operates more strongly on one than on the other.[2]

The illusion is an excellent and intuitive demonstration of the figure-ground distinction the brain makes during visual perception. Normally the brain classifies images by what surrounds a figure, establishing depth and other relationships. If one object surrounds another, the surrounded object is usually seen as figure, and the presumably further away (and hence background) object is the ground. In the three dimensional world, if an object such as a piece of fruit is lying on the ground, one would want to pay attention to the "figure" and not the "ground." However, when the contours are relatively equal, ambiguity starts to creep in, and the brain must begin "shaping" what it sees. Since the contours are ambiguous, the brain can alternatively interpret the black areas as figure or ground.

There is no doubt that this particular illusion occurs involves cognitive processing. Without having information stored in the brain that contains knowledge about vases and profiles, based on past experience, these reversible interpretations would not be possible.

Rubin's figure-ground distinction influenced the Gestalt psychologists, who discovered many similar illusions themselves. The higher-level cognitive pattern matching involved, where the overall picture determines its mental interpretation, not the net effect of the individual pieces, intrigued the Gestalt psychologists, who were very interested in the operational principle of the brain as holistic and parallel.

This ambiguity of figure and ground, and the ability to construct objects in a reversible fashion, has intrigued artists. In particular, M. C. Escher utilized figure-ground effects, similar to the face-vase figure although not based on Rubin's discovery, in several of his works. Escher also used the same figure (alternating the original with the reversed form) to great effect, such as in his woodcut Day and Night (1938).